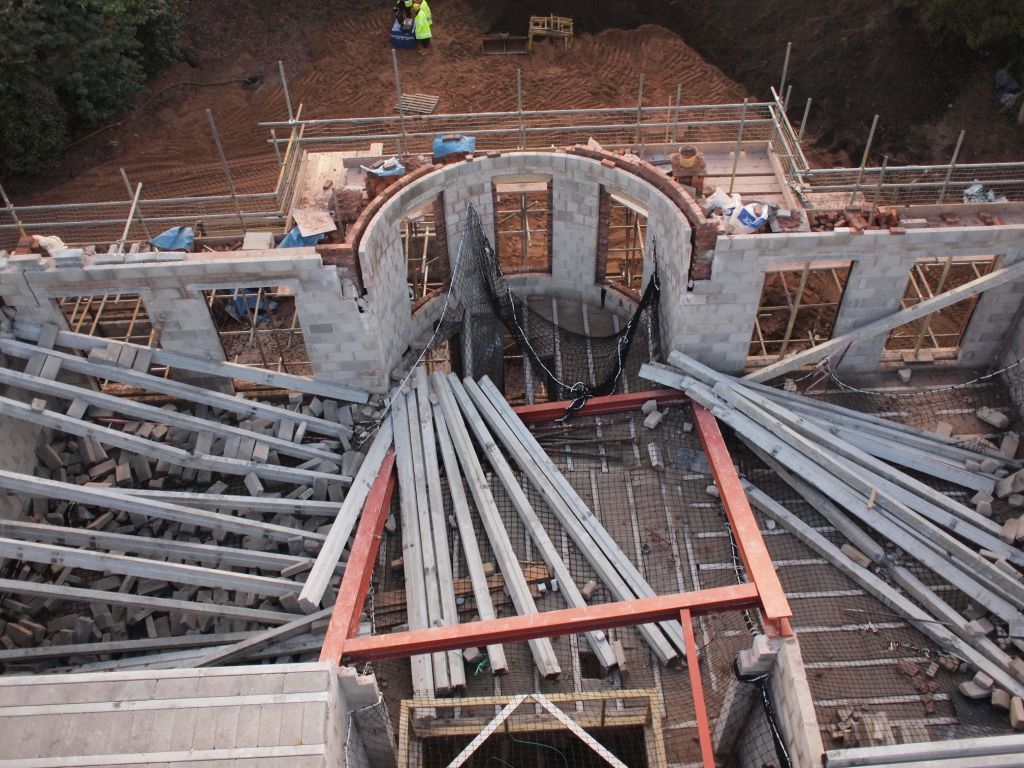 Three men were injured, one seriously, when a floor collapsed during construction work at a £2 million house in Trafford, a court has heard.
Belmont Homes (Cheshire) Ltd and Sale-based Waymac Ltd have been ordered to pay a total of £72,000 in fines and costs following the incident on 11 November 2011.
Two workers escaped with minor injuries but one suffered severe injuries when he put up his left arm to protect his head from a falling concrete beam, weighing around half a tonne.
The 47-year-old from Wythenshawe sustained a crushed arm, fractured ribs, punctured lung, broken collarbone and damage to his back. He has lost the use of his left hand and only has very limited use of his left arm. He has been unable to return to work since.
The HSE’s investigation into the incident found that work at the site had been badly planned, putting multiple lives in danger.
Liverpool Crown Court heard that property-developer Belmont had brought in several contractors, including bricklaying firm Waymac, to help with the construction of the four-storey property, on South Downs Road in Bowdon.
During the project, the firms discovered that the frame for the first floor was too high and needed to be lowered. This meant reducing the height of some of the concrete padstones that the frame rested on by lifting the frame and then lowering it back down.
As the concrete beams for the floor were put in place following this work, the floor collapsed. Three of the men fell with it, with the beams falling on top of them.
The HSE investigation found the work to lower the steel frame had been badly planned, and neither company had considered the potential risk of collapse while the structure was in a temporarily weakened state.
Belmont Homes (Cheshire) Ltd, of Budworth Heath in Cheshire, was fined £33,000 and ordered to pay costs of £15,000 after pleading guilty to breaching section 3(1) of the Health and Safety at Work etc Act 1974 by failing to ensure the safety of workers.
Waymac Ltd, of Eastway in Sale, was fined £9,000 and ordered to pay £15,000 in prosecution costs after pleading guilty to breaching regulation 28(1) of the Construction (Design and Management) Regulations 2007 by failing to ensure the structure did not collapse as a result of its work.
Speaking after the hearing, HSE principal inspector Neil Jamieson said: “One of the workers has suffered devastating injuries as a result of the collapse, and the other two were lucky not to have been more seriously injured or even killed.
“Belmont was responsible for the overall management of the work and the company failed to get a grip of the project. Waymac is also an experienced bricklaying firm and it should have been obvious to both companies that lifting and lowering the floor could be dangerous.
“They should have sought the advice of a structural engineer before allowing the work to go ahead. If they had then the injuries the workers suffered could have been avoided.”