Bridgend County Borough Council has been fined following the death of one pupil and injury to another after they were involved in a collision with the school minibus. 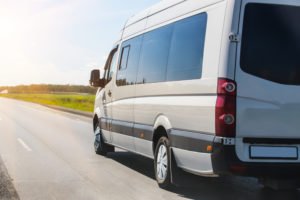 Following its investigation into the death of 15-year-old Ashley Talbot, the HSE has urged schools to review traffic arrangements within their grounds, and where possible design layouts so pupils are separated from moving traffic.

Cardiff Crown Court was told how, on 10 December 2014, Ashley was crossing the road in the grounds of Maesteg Comprehensive School to board his bus home when the collision took place. Ashley was pronounced dead at the scene. Another pupil was also injured.

The HSE found the layby created before the school opened in September 2008 was never large enough to accommodate all school buses at home time. This had been identified by council officers, but Bridgend Council made no plans to enlarge the layby so that pupils could board safely from the pavement.

For three years before the collision, some school buses had been parking on the other side of the road, which had no pavement, leaving children to board in the middle of the road while other vehicles were able to travel in both directions between the waiting buses.

South Wales Police investigated the circumstances of the collision and no charges were brought against the driver of the minibus.

In the days following the accident HSE took enforcement action against Bridgend Council.  This prohibited children from boarding school buses from the road, and required the Council to modify the bus layby to make it big enough for all children to board their bus from the pavement.  The was completed by the Council within a few weeks.

Bridgend County Borough Council of Civic Offices, Angel Street, Bridgend pleaded guilty to breaching Section 3 (1) of the Health and Safety at Work Act 1974 and was fined £300,000 and ordered to pay costs of £29,228.

Speaking after the hearing, HSE inspector Helen Turner said: “Firstly, we send our heartfelt condolences to the family and friends of Ashley Talbot, whose life was tragically ended at just 15.

“We believe Ashley’s death could have been prevented, and a series of missed opportunities meant this incident was waiting to happen. Although there had been previous near misses at Maesteg, there was no system for these to be reported and discussed. There are some clear lessons to be learned, particularly for other modern school sites.

“The need for children to cross the road to board their bus could have been taken away with proper planning and design, which should always seek to keep vehicles and pedestrians apart. HSE’s guidance clearly states that transport safety at every workplace should start with the creation of a ‘safe site.’

“Planning and parking should take into account ‘desire lines’, which are the routes most people will choose to take. Children may not be risk aware, there will be a rush of children all leaving school at once, and they will race for the back seat. This predictable behaviour makes it all the more important that transport risk is properly managed, and regularly reviewed.

“At HSE we stand by the principle of PLAN, DO, CHECK, ACT. This management approach is as pertinent for school grounds as it is any other workplace.

“We hope this prosecution will serve as a reminder to those with a responsibility of care to address transport risk in schools and actively monitor that their arrangements are effective to keep children safe.”

Download Now
School pupil death: ‘Missed opportunities’ led to fatal minibus incident Council fined following the death of one pupil and injury to another after they were involved in a collision with the school minibus.
Alison Fava
SHP - Health and Safety News, Legislation, PPE, CPD and Resources

Webinar: Use of technology in compliance and measuring performance