A group of schoolchildren had to be rescued by Keswick Mountain Rescue Team (KMRT) from Helvellyn after becoming stranded in winter conditions. 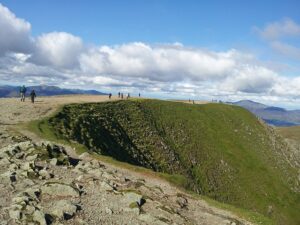 The group of 13 Year 10 pupils from The Gateshead Cheder were on an organised trip to Helvellyn in the Lake District, led by one teacher and a teaching assistant, on 5 March 2020, Newcastle Magistrates’ Court was told. Weather conditions on the day were cold and icy. Despite reviewing the Lake District Weatherline Report, which stressed the dangers to those ascending above the snow line, the school decided the trip should still go ahead as planned. Their route included ascending from Wythburn via Birk Side, and descending Helvellyn via Browncove Crags.

Despite the winter conditions many of the school children did not have suitable equipment, a number of them were wearing school shoes and school trousers; and others were wearing trainers. In winter conditions it is essential that hikers wear full winter clothing, including mountain boots, and that those venturing above the snowline carry appropriate equipment including ice axes and crampons.

The adults leading the trip had no formal qualifications in mountain leadership or any experience of mountain environments in winter conditions. The party had a map but relied on a smartphone app as a compass.

During their ascent, at least two members of the public warned the Gateshead Cheder party to turn back, but the group continued their ascent and managed to reach the summit of Helvellyn without incident. However, as the party made their descent, they inadvertently ventured off the path and unknowingly began traversing the west face of Helvellyn towards a section of steep terrain featuring vertical rock faces of around 20 metres in height.

While descending one of the pupils slid on the ice and fell several metres sustaining minor cuts. This caused another pupil to panic and run from the group down the mountain. The two adults remained with the injured pupil and the other school children. By this time, it had begun to get dark and the temperature was dropping.

The party were eventually located and rescued by KMRT, who cut steps into the snow to assist the party back to the path and down the mountain. The other pupil was lucky enough to make it back down the mountain and was found by members of the public.

The HSE’s investigation found that neither of the adults with the party had the appropriate skills, knowledge and experience to lead the trip, and that the school had not taken advice from a suitably competent person to plan or organise of the excursion. There was no effective system to check the suitability of the clothing and equipment the children had with them and no effective contingency plan in place if conditions became too difficult to proceed.

The Gateshead Cheder Limited of Bede House, Tynegate Precinct, Sunderland Road in Gateshead pleaded guilty to breaching sections 2(1) and 3(1) of The Health and Safety at Work (etc) act 1974. The school was fined £30,000 and ordered to pay a victim surcharge of £181 and costs of £4,574.90.

Speaking after the hearing, HSE Inspector Stephen Garner said: “On this occasion, none of the party came to serious harm, however, the school were aware of the weather and ground conditions, but decided to proceed without the appropriate planning, equipment, or suitably trained leaders. Those taking part in the trek that day were placed in serious danger and there was a clear failing by the school to adopt sensible precautions to ensure their safety.

“Excursions into mountains, particularly in winter, need to be led by people with the appropriate skills, knowledge and experience. If a school does not have access to the necessary expertise in house, then licensed Adventure Activities providers are available to manage the technical aspects of this type of trekking activity.”

He added: “This incident was entirely avoidable. HSE recognises the benefits of outdoor learning activities including those involving hiking or trekking in mountain environments, however schools need to take sensible and proportionate measures to control the risks involved. This trip should not have gone ahead without such measures in place.”