A scaffolding company from Poole in Dorset has been sentenced after a worker sustained serious, life changing injuries after falling five metres through a skylight whilst at work. 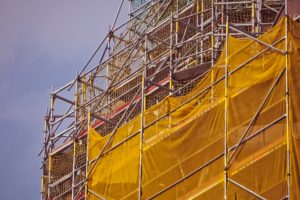 After completing work on the access tower, Mr Norris went to assist colleagues with the guard rails, gaining access to these via the roof. He fell through a skylight approximately five metres to the floor below and suffered numerous serious fractures to his pelvis, wrists, ribs, elbow and arm. Mr Norris remained in hospital for three weeks undergoing a number of operations and still requires ongoing physiotherapy. As a result, he has now been registered disabled, has had to move to an adapted flat and cannot return to work. His wife has been forced to give up work in order to care for him.

Investigating,  the HSE found that Solar Scaffold Services Limited, as an employer, failed in their duty to ensure the work at height was properly planned, supervised and carried out safely. Insufficient measures were taken to prevent a fall through the fragile roof whilst the building was being worked on.

Solar Scaffold Services Limited of Church Road, Poole pleaded guilty to breaching Regulation 4(1) of the Work at Height Regulations 2005. They have been fined £10,000 and ordered to pay costs of £3,666.80.

Speaking after the hearing HSE Inspector Caroline Penwill said: “Falls from height remain one of the most common causes of work related fatalities and injuries in this country and the risks associated with working at height are well known.

“Mr Norris’s injuries were life changing for both him and his family. He could have easily been killed. This serious incident could have been avoided if the work had been properly planned to reduce risk.”

Subscribe to the newsletter ✉️
Scaffolding firm fined after serious fall A scaffolding company has been sentenced after a worker sustained serious, life changing injuries after falling five metres through a skylight whilst at work.
Alison Fava
SHP - Health and Safety News, Legislation, PPE, CPD and Resources