A viola player who suffered a life-changing hearing injury at a rehearsal in 2012 has won a landmark High Court judgment against the Royal Opera House (ROH). 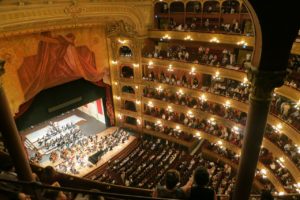 The case, won by Chris Goldscheider, has huge implications for the industry and the health and safety of musicians.

It is the first time a judge has scrutinised the music industry’s legal obligations towards musicians’ hearing. The ROH said it was “surprised and disappointed” by the judgment, the BBC has reported.

It is also the first time ‘acoustic shock’ has been recognised as a condition which can be compensated by a court.

On 1 September 2012, Chris Goldscheider was seated directly in front of the brass section of the orchestra for a rehearsal of Wagner’s opera Die Walkure in the famous orchestra pit at the Royal Opera House.

During that rehearsal, the noise levels exceeded 130 decibels, roughly equivalent to that of a jet engine. His hearing was irreversibly damaged.

Chris Goldscheider claimed damages for acoustic shock, a condition with symptoms including tinnitus, hyperacusis and dizziness.

He told the BBC: “With this condition if you are exposed to normal sounds, unfortunately they become incredibly painful.

“I suppose the nearest analogy is if you imagine for a normal person to walk on normal ground and then you imagine walking barefoot on glass.”

Goldscheider has to wear ear defenders to carry out everyday household tasks such as preparing food.

Especially upsetting is that he had been unable to listen to his 18-year-old son Ben – one of the country’s outstanding young French horn players.

The Royal Opera House argued that acoustic shock does not exist, and that if it did, Mr Goldscheider did not have it.

Their case was that he had developed an entirely natural hearing condition, known as Meniere’s disease, at exactly the same time as the super-loud, high intensity noise burst behind his right ear.

However, Mrs Justice Nicola Davies took a different view, stating: “I regard the defendant’s contention that Meniere’s disease developed at the rehearsal as stretching the concept of coincidence too far.”

The ROH also argued that the artistic value of the music produced by its orchestra meant some hearing damage to its players was inevitable and justifiable.

Mrs Justice Davies disagreed, ruling that “the reliance upon artistic value implies that statutory health and safety requirements must cede to the needs and wishes of the artistic output of the Opera company, its managers and conductors.

“Such a stance is unacceptable. Musicians are entitled to the protection of the law, as is any other worker.”

Reacting to the ruling, Chris Goldscheider said: “As you can imagine a law suit of this magnitude takes its strain on everyone. Not just on me but my family, my children.

“Here we are [today] and I’m just so overjoyed at the judge’s decision and I hope it will prevent any more musicians being injured from today onwards.”

Speaking of the impact of the decision, Chris Goldscheider’s solicitor, Chris Fry of Fry Law, said: “This case has huge significance and will send shockwaves across the music business.

“It has considered itself exempt from the same regulatory requirements as all other sectors because of the artistic nature of its output. This, in our view, has always been a dismissive view from an industry which creates and sells ‘noise’ as a product.”

The Royal Opera House and other orchestras will now need to re-assess policies and procedures and the design of orchestra spaces and could face claims against them by other musicians.

In a statement, the ROH said the expert medical advice it had consistently received was that long-term hearing damage could not be caused by an isolated incident of exposure to live music.

“We have been at the forefront of industry-wide attempts to protect musicians from the dangers of exposure to significant levels of performance sound, in collaboration with our staff, the Musicians’ Union, acoustic engineers and the Health and Safety Executive,” it continued.

“Although this judgment is restricted to our obligations as an employer under the Noise Regulations, it has potentially far-reaching implications for the Royal Opera House and the wider music industry.

“We do not believe that the Noise Regulations can be applied in an artistic institution in the same manner as in a factory, not least because in the case of the Royal Opera House, sound is not a by-product of an industrial process but is an essential part of the product itself.

“This has been a complex case and we will consider carefully whether to appeal the judgment.”

According to Musicians UK, the leading UK charity for professional musicians: “The unfortunate circumstances surrounding Chris’s tragic hearing loss reflect a growing number of hearing related issues, as highlighted in our 2015 hearing survey, where 59.5% of musicians said they had suffered hearing loss and 78% said working as a musician was a contributor to their hearing loss.”

Chris Goldscheider began playing the violin at the age of five and the viola from about 21. He studied in Prague and the UK and played with the Royal Liverpool Philharmonic and BBC Symphony orchestras. In 2002 he joined the viola section of the ROH orchestra as number eleven viola and was promoted to number six. Career highlights included playing on stage with Kylie Minogue and with the Three Tenors to 100,000 people in Barcelona.

“Following my injury I spent 18 months trying to recover, recuperate and get back to playing, and unfortunately I couldn’t do it,” he said.

Goldscheider left the ROH in July 2014 as a result of his injuries.

Listen Up: ‘Employers must provide the same level of hearing protection to all workers under amended PPE Regulations’

a weighted, with peaks of around 120. Bigger issue was the fact they knew the noise would be in the UAV and didn’t make it mandatory to wear hearing protection or mark the zone.
They left it up to the artist to decide when it was appropriate to wear.