A former British Airways pilot who was more than four times over the alcohol limit when he reported for duty has been jailed.

Julian Monaghan was arrested just minutes before the British Airways Boeing 777 to Mauritius was due to take off on the evening of 18 January 2018.

He was subsequently charged with performing an ancillary activity to an aviation function with 86mg of alcohol per 100ml of blood in his system. The legal limit is 20mg. 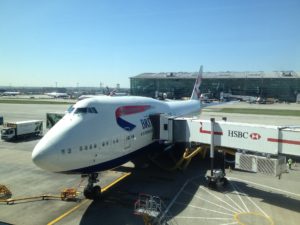 Monaghan, 49, a resident of South Africa who had worked for BA for 17 years, pleaded guilty at Crawley Magistrates’ Court on 6 June and was yesterday sentenced at Lewes Crown Court to eight months’ imprisonment – reduced from 12 months due to his early guilty plea.

Commenting on the trial, Alice Trodden from the Crown Prosecution Service said: “The defendant was four times over the prescribed alcohol limit when he reported for duty as first officer for the flight.

“The defendant was arrested just 10 minutes before the flight was due to push back and the potential consequences, had he been required to take control of the plane while impaired in the event of an emergency, cannot be underestimated.

“In the face of the overwhelming evidence put forward by the police and CPS, the defendant pleaded guilty at the first available opportunity.”

Monaghan maintained that he had obeyed the airlines rule of not drinking up to eight hours before a flight but the prosecution stated that given the alcohol reading taken over an hour after the flight was due to leave was so high, he must have drunk “a significant amount” shortly before the eight-hour cut-off.

Detective Constable Stuart Macpherson, the Sussex Police officer in charge of the case, added: “Monaghan was reported to us through the diligence and integrity of the aircraft technician who smelt alcohol on his breath and alerted the authorities as appropriate.

“Although he offered mitigating circumstances and was not an operating pilot on the day in question, he was still an active member of the flight deck and could have been called upon at any moment. Therefore his mitigation does not alter the fact that he potentially put the lives of more than 200 people at risk.

“There are no laybys at 30,000ft and had Monaghan been required to take control of the aircraft in the event of an emergency on the flight deck in the early stages of the flight, his judgement and abilities would have been impaired.”