A company and three of its bosses have been fined more than £2m over the death of a worker who suffered catastrophic head injuries at a scrap metal recycling plant in Oldbury.

Father-of-one Stuart Towns, aged 34, had been working for Alutrade Ltd just three months when the tragedy happened at the Tat Bank Road site on 24 July, 2017.

CCTV footage shows Mr Towns had walked into an area underneath a hopper, which housed powerful engines used to feed a conveyor belt with scrap metal for processing.

The video below shows footage from the West Midlands Police investigation.

A gate preventing workers from getting to the area had broken, and the machine should have been shut down and isolated if any kind of maintenance or cleaning work needed to be done on it.

Minutes later, his body was discovered by distraught colleagues. He’d suffered catastrophic head injuries and died at the scene.

Four days earlier, forklift driver Mr Towns had been told not to work so close to the hopper after being spotted by Managing Director Malcolm George.

He was spotted on CCTV working dangerously close to the machinery 40 minutes before his death, but George, who was stood nearby, took no action.

A major investigation by West Midlands Police detectives and the Health & Safety Executive saw an entire month’s worth of CCTV analysed, with hundreds of breaches found. They included:
•    Workers jumping up and down on metal in a hopper to clear blockages
•    A forklift truck driven by Malcolm George being used to lift Mr Towns 18ft into the air to clear a blockage, with no safety rigging.
•    Staff walking on a conveyor belt to clear blockages.

Last month at Wolverhampton Crown Court, Alutrade Ltd admitted corporate manslaughter. They were sentenced at the same court on 25 March.

George, 55, of Bromsgrove, Director Kevin Pugh, 46, from Sutton Coldfield, and Health and Safety Manager Mark Redfern, 61, of Rowley Regis, were initially charged with Gross Negligence Manslaughter, but instead pleaded guilty to breaches of the Health and Safety at Work etc Act 1974.

They admitted the charge on the basis that their failings didn’t cause the death, but together the management of the company amounted to corporate manslaughter. 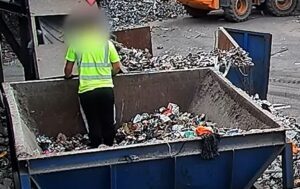 Senior investigating officer Det Insp Hannah Whitehouse said: “Stuart’s death should never have happened, but sadly it was an incident waiting to happen.

“He and other staff at Alutrade Ltd were operating in a culture where dangerous working practices were regularly overlooked.

“You do not need a detailed understanding of health and safety legislation to know from watching the footage that workers were frequently allowed to risk their lives.

“The company put profit before health and safety and it cost Stuart his life. I hope today’s convictions and hefty fines act as a deterrent to anyone else involved in the industry who hasn’t got their workers’ safety as the top priority.”

Mr Towns’ family said today: “After five years we now feel we can start to focus on the happy times we shared as a family with Stuart.

“We hope that lessons can be learned from the way that Stuart died and hope that no other family goes through what we have been through.

“It’s now time for us to focus on the good memories we have of Stuart.”

HSE inspector Jan Willets said: “Serious injuries to workers in waste and recycling are too common; and robust health and safety management by employers would reduce the risk.

“If the gates preventing access to the conveyor had been repaired, workers would not have been put at risk and Stuart Towns’ fatal injuries could have been prevented.”

Listen today!
Scrap metal firm fined £2m over death of worker A company and three of its bosses have been fined more than £2m over the death of a worker who suffered catastrophic head injuries at a scrap metal recycling plant.
Safety & Health Practitioner
SHP - Health and Safety News, Legislation, PPE, CPD and Resources