Construction firm Montway Ltd has been fined £144,000 after a worker was seriously injured when he fell off a roof during demolition work. There was no scaffolding provided and the work was not being supervised.

Southwark Crown Court heard that on 25 February 2013 two workers were working on the roof of a two storey detached house in Golders Green in London.

Romanian labourer Ioan Vancea fell five metres from the partly demolished roof to the ground and sustained a series of injuries including a fractured spine. He was in an induced coma for two weeks and remained in hospital for three months. 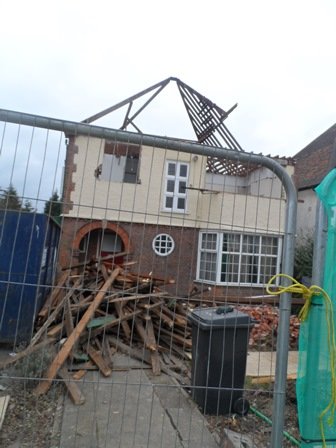 The site was inspected by the Health and Safety Executive (HSE) two weeks after the incident and unsupervised demolition work was still being carried out. A number of serious matters were identified including asbestos which had been removed from the house and was found in a pile by a neighbouring property’s hedge and in broken pieces mixed in with other debris. Enforcement Notices were immediately served to ensure workers and members of the public were protected.

Montway Limited of Batchworth House, Batchworth Place, Church Street, Rickmansworth, Hertfordshire, WD3 1JE pleaded guilty to breaching Section 2(1) of the Health and Safety at Work Act 1974 and was fined £144,000 and ordered to pay £43,606.15 in costs.

Montway Ltd originally pleaded not guilty, but changed their plea and sought a Newton Hearing to determine numerous issues it disputed. The Newton Hearing took place before District Judge Roscoe between 23-24 May 2016.

“Mr. Vancea’s injuries were life changing and he could easily have been killed.”

“This serious incident would have been avoided if scaffolding had been provided. Montway Ltd’s site documents even identified it was needed.”

“Montway Ltd sought a Newton hearing so they could dispute numerous issues in front of a District Judge. They were unsuccessful and the Judge’s ruling confirmed she was satisfied that their approach towards the welfare of their employees was lax and casual, and it was their overall poor management of health and safety that directly led to this incident.”

Listen today!
£144k fine after labourer fractures spine Construction firm Montway Ltd has been fined £144,000 after a worker was seriously injured when he fell off a roof
Lauren Applebey
SHP - Health and Safety News, Legislation, PPE, CPD and Resources