Ian joined Informa (formerly UBM) in 2018 as the Editor of SHP. Ian studied journalism at university before spending seven years in online fantasy gaming. Prior to moving to Informa, Ian worked in business to business trade print media, in the automotive sector. He was Online Editor and then moved on to be the Editor of two publications aimed at independent automotive technicians and parts distributors.
March 19, 2021

Drayton Manor theme park has been fined £1m over the death of an 11-year-old schoolgirl who fell from one of its rides and drowned. 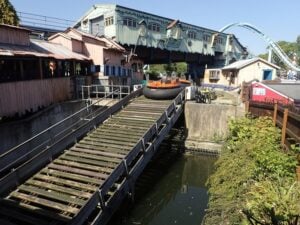 Eleven-year-old Evha Jannath, from Leicester, was on a school trip when she fell from the Splash Canyon ride at Drayton Manor theme park on 9 May 2017. She died after being struck by a boat as she tried to get out of the water.

Evha, who couldn’t swim and was unsupervised on the ride at the time of the incident, fell from the vessel when she stood up at the ‘worst possible time’ and was ‘propelled’ into 12ft deep water and subsequently drowned, the inquest heard.

Lawyers for the HSE said the operators oversaw “systemic failures of safety” on the river rapids ride. Speaking on behalf of the HSE, James Puzey, told the judge that “the control measures they had were failing every day.”

Drayton Manor Park Ltd (in administration), of Tamworth, Staffordshire pleaded guilty to breaching Section 3(1) of the Health and Safety at Work etc. Act 1974 and was fined £1 million.

Mr Justice Spencer added: “In my judgment, it would be wholly inappropriate to do other than impose the fine which the offence merited.

“The public and Evha’s family must not be led to think that this serious offence, which resulted in the death of a child, can properly be met by only a nominal penalty.”

He added: “I bear in mind there are other similar rides in the United Kingdom, I bear in mind that this theme park has been sold to another operator and the staff transferred over.

“It is important that lessons are learned and the seriousness of the defendant company’s failing, in this case, is marked by an appropriate punishment.”

Speaking after the hearing, HSE Principal Inspector Lyn Spooner said: “As a result of Drayton Manor’s failings, 11-year-old Evha Jannath died at the end of what should have been a fun day out.

“The risks from ejection from the raft had been evident to Drayton Manor for some time, yet they still failed to take the action that could have prevented Evha’s death. This tragic event should never have happened and my thoughts and the thoughts of HSE remain with Evha’s family and friends.”

Evha’s family welcomed the decision to prosecute, when it was announced in October 2020. Her brother, Mohammed said: “We would like to thank the police, our solicitors, and the community for their help. We have lost our darling Evha forever. Nothing will bring her back.”

Former MP Keith Vaz took up the case when he represented the Leicester East constituency and continues to support the family. Mr Vaz said: “They are pleased that this matter is now drawing to an end.”

In December 2019, a coroner urged theme parks to address water ride safety concerns following the inquest into the drowning.

Margaret Jones, the Assistant Coroner for South Staffordshire, wrote a report for the Prevention of Future Deaths to UK theme park managers after concluding an inquest into the death of the 11-year-old.

According to Staffordshire police, a member of staff who had accompanied the group, waited by the exit of the ride with another pupil, who did not want to ride. The school’s Head Teacher Erfana Bora said that this was in line with the school’s health and safety policy on the day.

She said: “We can’t stipulate teachers must be on rides, as there will be instances where some children would not wish to be on the ride, and so in those cases it’s safer overall for the teacher to stay with that child… they make the assumption the park staff are responsible for overall safety on that ride.”

The inquest was shown CCTV footage of the incident, which showed Evha standing as the vessel hit the ride’s side wall, sending her head first into the water. The footage then showed her wading along the ride, trying to return to her friends. She then attempted to climb an ‘algae-covered travellator’ and falling off into a ‘much deeper’ area of water.

Eleven minutes passed before the girl was spotted on camera, before she was pulled out of the water, lifeless. At the hearing, judge heard but for the bystander intervening, “no-one [park staff] would have noticed”.

The South Staffordshire Coroner’s office said the cause of death was “blunt force chest trauma”, however this has since been changed to drowning.

A statement released at the time in the incident, by Drayton Manor Director, George Bryan, read: “We are all shocked and devastated and our thoughts are with her family and friends and this tremendously difficult time.”

Jones said that during the inquest “the evidence revealed matters giving rise to concern”. She added: “In my opinion there is a risk that future deaths will occur unless action is taken.”

Identifying six “matters of concern”, she said it was “not possible to adequately monitor CCTV” on the ride that day because staff had other tasks to complete, and also highlighted the fact only half the ride’s route was covered by cameras.

She added there had been no safety warnings given to guests boarding the ride’s boats, warning signs were incomplete, and in some cases were illegible due to wear and tear.

The coroner said no water rescue equipment was available to staff and they had not been trained in such rescues. She also said that ride staff had “no clear understanding” of emergency procedures.

Concluding, she added: “Management staff did not accept that guest safety measures (CCTV, safety instructions and signage) had failed.”

“In my opinion, action should be taken to prevent future deaths and I believe you have the power to take such action.”

The coroner also drew attention to a water ride safety notice issued to all theme parks immediately after Evha’s death, by the HSE.

She asked for a detailed response from Drayton Manor’s manager to the concerns raised at the inquest, and replies regarding actions taken as a result of the HSE notice from all theme park managers nationally.

The coroner has given until January 8 for the parks to respond with what actions they are taking, although that period can be extended.

Copies of the report have been sent to Evha’s family and school, the Chief Coroner for England and Wales and Staffordshire Safeguarding Children Board.

Following Evha’s death, a mother claimed she warned Drayton Manor about the dangers of Splash Canyon back in 2013, after her ten-year old son fell on the same ride.

Vikki Treacy’s son left his seat as the boat hit the side of the ride, causing him to topple into the water. He was unable to return to the boat on his own – struggling for grip – and was pulled to safety by someone else in the boat. “Had there been another boat close it could have crushed him. He was very lucky”, she said.

The ride, which has been closed since the incident, will not be reopened without approval by the HSE.

Evha’s death came less than a year after Merlin Entertainments were fined £5m for rollercoaster crash on the Smiler ride at Alton Towers, which left five people seriously injured.

Listen today!
Drayton Manor death: £1m fine for safety failings which led to schoolgirl death Drayton Manor theme park has been fined £1m over the death of an 11-year-old schoolgirl who fell from one of its rides and drowned.
Ian Hart
SHP - Health and Safety News, Legislation, PPE, CPD and Resources

There seem to be a lot more serious accidents taking place involving amusement parks and water rides. Is it the media focussing in on bad news or is there a fundamental problem/are standards dropping? Does anyone have first hand involvement in this industry to comment?