Ian joined Informa (formerly UBM) in 2018 as the Editor of SHP. Ian studied journalism at university before spending seven years in online fantasy gaming. Prior to moving to Informa, Ian worked in business to business trade print media, in the automotive sector. He was Online Editor and then moved on to be the Editor of two publications aimed at independent automotive technicians and parts distributors.
April 9, 2019

An investigation has been launched by the HSE after a teenage boy was injured when part of Brighton Pier’s Air Race ride came loose. 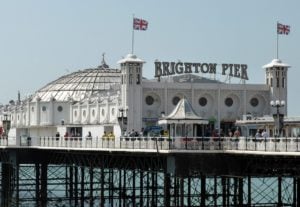 Emergency services were called to the scene at around 3pm on Monday (April 8) and have since commented that “initial indications” suggested no one was seriously injured. The HSE has subsequently opened an investigation into the incident.

Local media reported that a teenage boy suffered leg injuries and was stretchered from the pier and taken to hospital, which was confirmed by South Each Coast Ambulance.

“We have responded to an incident on Brighton Pier today in which it was reported at approximately 3pm that a piece of a ride had come loose. A teenage male has been taken to hospital with a leg injury.”

We have responded to an incident on #BrightonPier today in which it was reported at approximately 3pm that a piece of a ride had come loose. A teenage male has been taken to hospital with a leg injury. Others were shaken but uninjured. We are clearing from the scene.

In a statement, Anne Ackford, CEO of The Brighton Pier Group, said the company would open its own investigation.

“An incident occurred today when part of one of our rides (Air race) became detached during the ride cycle and a passer-by was hit by the part of the ride.

“We believe that he is not seriously hurt and has been taken to hospital to ascertain any injury.

“The ride has not experienced any issues before and we have been in immediate contact with the manufacturer to ask them to send a team of engineers to investigate.”

Melvin Sandell, Senior Consultant and Expert Witness at Finch Consulting Ltd, who is formerly the HSE’s Operational Lead for Fairground and Theme Park Safety, told SHP that pier fairgrounds should apply the same rules and regulations as any UK theme park attraction: “The regime for test and inspection is the same for all such machines, no matter where and what.

“All rides are subjected to an annual test under the ADIPS regime and the operators should also do their daily running and maintenance checks in accordance with the manufacturer instructions.

“I’m sure the HSE will be looking closely at these and how diligently they were carried out.”