Jamie Hailstone is a freelance journalist and author, who has also contributed to numerous national business titles including Utility Week, the Municipal Journal, Environment Journal and consumer titles such as Classic Rock.
July 26, 2018

Heatwave: ‘Heat-related deaths could treble in the UK by 2050’

The Government should consider introducing maximum workplace temperatures, according to a new report. 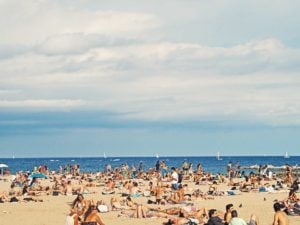 The report by the Environmental Audit Select Committee has been published as Britain continues to swelter.

In the report, the committee warns heat-related deaths could treble in the UK by 2050 unless the Government takes action.

In particular, it calls on ministers to consult on introducing maximum workplace temperatures, especially for work that involves significant physical effort.

It also calls on Public Health England to issue formal guidance to employers on when to relax dress codes and allow flexible working during heatwaves.

The report also recommends head teachers be issued with guidance about safe temperatures in schools and when to relax school uniform policy during hot weather.

Earlier this week, the Met Office issued a heat health watch warning and advised people to ‘stay out of the sun’ for the remainder of this week as temperatures soar.

A level 3 or amber alert has been put in place and will remain until 09:00 on Friday for the majority of the east and south-east of England.

“The Government needs to do more to warn the public of the health risks of heatwaves, particularly when they fall outside of the summer period, and should appoint a minister to lead work across Government,” said Committee Chair, Mary Creagh.

“The Government’s new adaptation plan promises no effective action to prevent overheating in buildings. It must change building regulations and planning policies to ensure homes and transport networks are able to deal with extreme heat, and that local authorities and cities have green spaces and heat-resilient infrastructure.”

Commenting on the report, TUC General Secretary Frances O’Grady said: “The law only gives minimum working temperatures, but the hot summer we’re having has shown the need for a maximum limit too. It’s great to have support from MPs for this common sense policy, and we hope the government will take quick action.

“Meanwhile we encourage employers to keep on being sensible while the hot weather goes on. Relaxing dress codes and being flexible on working times to avoid the hottest part of the day can make things much easier.”

To read the report’s conclusions and recommendations, click here.

Can the spread of workplace illness be avoided, post-COVID, by increased remote working?