‘You could have killed her’ said Magistrate in food allergy case 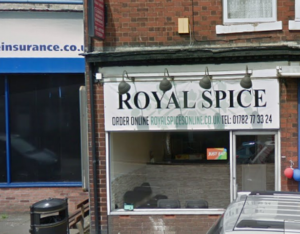 A pizza takeaway owner pleaded guilty to two charges relating to a customer allergy reaction, from eating a pizza.

Jehangir Hussain owner of pizza restaurant, Royal Spice in North Staffordshire, pleaded guilty to charges involving the mislabelling of food and hygiene products, and one charge of ‘engaging in a commercial practice which is a misleading action containing false information’.

It was reported that the couple bought a chicken tikka masala pizza from Royal Spice on March 2019. The customer had seen an allergy warning on the menu and asked if the pizza was free from nuts, because his girlfriend had an allergy.

After a few bites, the victim started to suffer from an itchy throat, swollen lip and struggled to breathe. The injury was so severe that she had to use her Epipen medication for the first time, as well as vomiting on the way to Royal Stoke University Hospital.

Lucy Daniels, prosecuting on behalf of Staffordshire County Council’s trading department explained that: “He spoke to a different person on the phone. This person told him that he was lying about the incident.”

Mr Hussain later called the victim’s boyfriend back, apologised and offered to cover any costs incurred during the medical alert.

An investigation by the Council revealed that Royal Spice had no system in place to correctly label allergens or ingredients. Hussain was also displaying a four-out-of-five-star hygiene rating sticker despite not being rated by Newcastle Borough Council. He was later awarded one-star.

He was fined £5,231.82 and ordered him to pay a £90 victim surcharge, given a 12 month community order which includes 8- hours of unpaid work and 30 rehabilitation activity days.

Paul Jenkins, mitigating, said: “The defendant has very limited financial means, to the point where the business is on its knees. He’s trying to offload the premises but is having difficulties in that respect”, as the court also heard Hussain is £10,000 in debt from buying the Royal Spice.

Paul added: “He accepts that he was the person who conversed with his chef that this could be made without nut allergens. He was front-of-house, the chef at the time was assuring him that it could be made free from almond powder but there would be coconut powder. Whether there was some communication lost between him and the chef, I know not.”

Following the case, Councillor Gill Heath, cabinet member responsible for trading standards, said: “Food allergy and intolerance is a growing concern for our trading standards service and something that can be life threatening. Our team takes the matter very seriously and works with food businesses to ensure they understand the need to know exactly what is in the food they serve and the importance of clearly labelled food products and menus.

“This successful prosecution sends out a clear sign to food businesses that we will take action against those who do not follow the simple rules to ensure food safety. We’ve had a number of serious incidents in Staffordshire where people have ended up in hospital as a result of being served food that has given them a severe reaction. Our job is to help keep people safe and if people choose a food outlet and are in any doubt about what’s in their food, they should walk out and contact us immediately.” 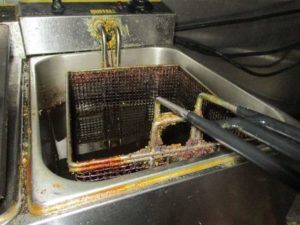 A former Director of a food company has pleaded guilty to offences under the Food Safety and Hygiene Regulations 2013.

On 29 January, Peterborough Magistrates’ Court heard that Nigel Marsh, former Director of Hospitality Bars Ltd, which ran George’s public house in March, pleaded guilty after an investigation by Fenland District Council found that he had repeated failures to adhere to food safety regulations.

In February 2019, Environmental Health officers carried out an inspection on George’s and found several serious food hygiene breaches including:

The kitchen was closed voluntarily while the issues were addressed.

Enforcement notices had been previously served and Environmental Health officers had offered advice and guidance on past visits, as well as in letters to Mr Marsh.

The Council had previously inspected George’s prior to the visit in February 2019, where enforcement notices, advice and guidance was given to Mr Marsh by Environmental Health officers.

However, the latest inspection revealed that standards had deteriorated again.

Given the seriousness of the breaches and the past poor history of compliance the Council decided to bring prosecution proceedings against Mr Marsh as the director of Hospitality Bars Ltd.

On sentencing, the magistrates found that Mr Marsh had a high level of culpability due to his poor food safety record and considered the offences serious. In mitigation, the Magistrates noted that Mr Marsh had pleaded guilty at the earliest opportunity, had accepted ultimate responsibility and had no relevant previous convictions. Mr Marsh was fined £2000 with a £170 victim surcharge and ordered to pay £1000 costs.

Councillor Samantha Hoy, portfolio holder for housing said: “These were serious offences and the defendant has a history of poor compliance with food safety and hygiene laws. It is only by chance that there was no food poisoning outbreak linked to the premises.”

“The council does not take decisions to prosecute lightly but sometimes it is necessary to protect the public and reassure compliant food businesses that poor food hygiene and safety standards will not be tolerated” she added.

Pub fined highest ever fine in borough of Waltham Forest

During an inspection in September 2018, by Waltham Forest council, officers discovered a “large and active mouse infestation”, at The Goose in Hoe Street pub.

The council immediately acted by temporarily closing the pub for having inadequate pest control measures. However, The Goose has since reopened since the closure in 2018.

On 7 February, at Thames Magistrates’ Court, Stonegate Pub Company, owner of The Goose, was fined £53,333 and costs of £4,042, as well as a victim surcharge of £170. The total sum of £57,527 is the largest ever fine for a food business operator failing to meet safety standards in Waltham Forest.

Following improvements implemented following the closure, The Goose is currently rated four out of five on the Food Standard Agency’s food hygiene rating database after its most recent inspection in January 2019.

Cllr Clyde Loakes, Deputy Leader and cabinet member for the environment, said: “Having the correct pest control measures in place is not difficult and it’s hard to understand why the owners of The Goose failed so badly. Food businesses know they must do all they can to make sure that customers are not in danger of illness or worse because of vermin or nasty bugs in their kitchens or premises, it’s that simple.

He concluded: “This huge fine, the largest we have seen in Waltham Forest, sends a clear message to food businesses: There is no excuse for not taking your responsibilities seriously. We will always press for the harshest penalties against those who seek to cut corners and through doing so play games with their customers’ health.” 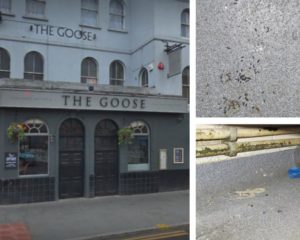 The owner of a Chinese restaurant has been banned from running a food business after consistently ignoring warnings over food safety.

York council inspected the restaurant in December 2018 and February 2019, and on both inspections, it failed to deliver a hygiene rating higher than one.

The investigation revealed that there were issues such as:

The restaurant had also failed to comply with an earlier hygiene improvement notice issued in October 2017.

Wu, who is also the director of the restaurant’s operating business Infinity Hardheadedness Ltd, was prosecuted earlier in August 2018 for failing to comply with five hygiene improvement notices and protect food from contamination in the kitchen.

He was fined £4,430 over his consistent breaching of food hygiene regulations over a five-year period. Wu was issued with a hygiene prohibition order preventing him from running a food business, which is the second order issued by City of York Council this year.

Coun Andrew Waller, City of York Council’s Executive Member for Economy and Strategic Planning, said: “York is home to a variety of food establishments, and we will continue to ensure that standards are met and that customers are confident in the quality of the food they are being served in the city. The takeaway was given advice and multiple opportunities to improve, which it repeatedly failed to abide by.”

A luxury spa chain has been fined for breaching five nutrition and health claims and nine other charged for failing to declare allergens on its food dishes.

Champneys, a chain which had counted Princess Diana, the Beckhams and Dame Judi Dench among its guests, allegedly made multiple false claims on its food menus, misleading the public with information.

It has also been charged with failing to tell its guests about allergens, such as gluten, mustard, eggs and soybean, in its food and selling a Vegan Tofu Pad Thai dish which contained milk.

It was reported that the spa also told its guests, who paid up to £230 a night, that its apple crumble could cut the risk of cardiovascular disease and diabetes as well as cancer, and at its Forest Mere resort in West Sussex, the company is accused of failing to inform guests it had a food hygiene rating of two out of five.

Champneys denied all the charges.

The firm was due to go on trial on Tuesday 18 February at Brighton Magistrates Court after West Sussex Country Council launched a prosecution against it on 19 charges relating to food safety, information, nutrition and consumer protection laws.

However, the case was adjourned at the last minute when neither Champneys or the county council attended the court, a spokesperson for West Sussex County Council said it had come to an agreement with Champneys which would mean court proceedings would be dropped.

Judge Amanda Kelly said: “I’m rather annoyed by counsel not turning up for this Champneys trial. There are no words. If found guilty, the spa chain could face an unlimited fine.”

A spokesperson for the Council said: “The Council and the company came to an agreement as to how the various charges would be dealt with and recorded and, as a result, no trial of the charges was considered to be in the public interest. The Council considers the agreement reached was a satisfactory outcome and meant that the investigation and action taken had been beneficial.”

Food safety news round-up: Nine-month prison sentence for a woman for failing to comply with food hygiene regulations and a takeaway restaurant guilty of five offences