Safety and Health Practitioner (SHP) is first for independent health and safety news.
May 16, 2018

Two companies have agreed to pay nearly £30,000 to a Norfolk charity after admitting their respective roles in a river pollution incident. 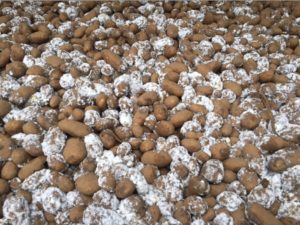 The pollution stemmed from rotting potatoes being stored in a warehouse rented by Lamb Weston/Meijer UK Ltd on land owned by Ralph Harrison & Co Ltd at Little Snoring Airfield, Norfolk.

As the potatoes decomposed they released liquid that entered the surface water drains at the site and subsequently passed into a tributary of the River Stiffkey at Little Snoring, near Fakenham, Norfolk.

The incident was reported to the Environment Agency in November 2015 and investigations were undertaken. Environment Agency officers found that the liquid from the decomposing potatoes contained nutrients which affected a tributary of the River Stiffkey, reducing the dissolved oxygen in the water. This resulted in the death of fish and invertebrates in a 1km stretch of water.

It was found that Ralph Harrison & Co Ltd’s negligence had led to the pollution.

No written lease agreement was in place between the parties and no risk assessment had been prepared to set out what action would be taken to prevent the escape of polluting liquid.

Having taken into account the circumstances of the case, in particular the localised nature of the environmental harm, the action taken to prevent any further occurrences and the companies’ lack of previous convictions, the Environment Agency decided that in this instance, it would be appropriate to deal with the matter through Enforcement Undertakings.

Both companies agreed to take action to prevent such an incident happening again.

Ralph Harrison & Co Ltd dredged the watercourse to remove remaining pollution and installed new valve and pump systems at the site to prevent any future incidents.

The companies now also have a written lease agreement, which had not previously been in place.

Marcus Sibley, Norfolk Environment Manager said: “Enforcement undertakings allow those who commit offences to restore the environment and to take steps to prevent a recurrence.

“When appropriate, they allow a quicker resolution than a prosecution and help offenders who are prepared to take responsibility for their actions to put things right voluntarily working with their local communities”.

The EU was offered in relation to an offence of pollution under Regulation 38 of the Environmental Permitting (England and Wales) Regulations 2010.

The EU was completed in February.

Discover how you can advertise with us
Companies pay nearly £30,000 to river charity after pollution incident at airfield Two companies have agreed to pay nearly £30,000 to a Norfolk charity after admitting their respective roles in a river pollution incident.
Safety & Health Practitioner
SHP - Health and Safety News, Legislation, PPE, CPD and Resources