After the Scottish Government commissioned a series of independent inquiries into building safety and the effectiveness of the Scottish Building Standards system, a study was undertaken to identify whether a new firestopping certification scheme should be implemented. 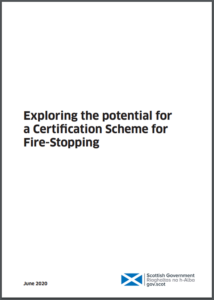 A sample of stakeholders, including local authorities, contractors and insurers were interviewed as part of the research, which concluded that “a certification scheme in firestopping is seen as potentially beneficial for public safety, consistency and customer confidence”.

The report, commissioned by the Building Standards Division, consequently concluded that a certification scheme should be introduced on firestopping to cover both active and passive fire safety measures.

It should be noted that within this investigation, the term ‘firestopping’ referred to all aspects – both passive and active – of the protection of buildings from fire. Certification currently operates under The Building (Scotland) Act 2003, which allows “suitably qualified and experienced building professionals to act as Approved Certifiers”.

Research participants were however divided on the potential commercial/financial benefits, with contractors concerned that it would just add another layer of bureaucracy and costs to their roles. There are, after all, already four approved certification schemes in Scotland – all voluntary – where Approved Certifiers undertake regular audits which are managed via approved Scheme Providers.

Local authorities also raised concerns that a scheme would be unlikely to relieve pressure and the workload related to building inspections, as inspection standards would still need to be met to the same degree.

A consensus was not reached on whether the scheme should be made mandatory – this was deemed the best long-term approach, but difficult to implement in practice.

Overall, based on the results, the report made several key recommendations:

The immediate first steps proposed are to “focus activities on improving and reinforcing all the training and qualifications related to fire safety”.

Read the full 66-page report: Exploring the potential for a Certification Scheme for Firestopping.

Access your free download
Scotland explores potential for firestopping certification scheme After the Scottish Government commissioned a series of independent inquiries into building safety and the effectiveness of the Scottish Building Standards system, a study was undertaken to identify whether a new firestopping certification scheme should be implemented.
James Moore
SHP - Health and Safety News, Legislation, PPE, CPD and Resources

Lessons from Grenfell: Why aren’t we learning?