Playing with fire water?  It’s time to close in on pollution containment 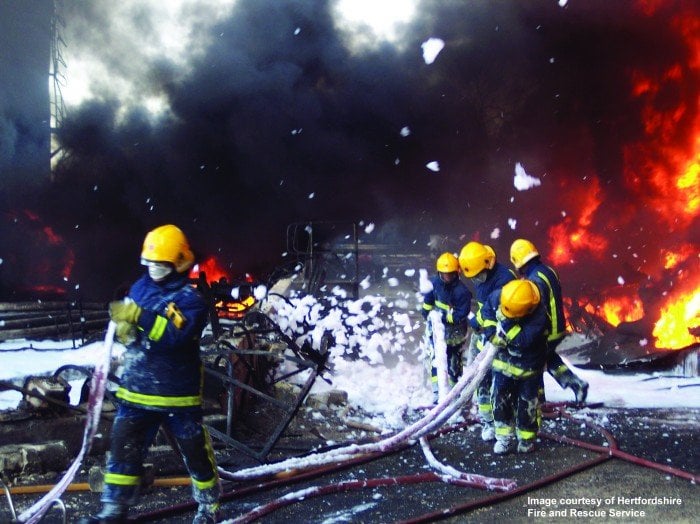 People are often surprised when I tell them that the most likely environmental damage caused by fire at an industrial site is not a result of the fire itself, but the water that is used to fight it.

It’s not air pollution or even the combusting materials themselves that most often cause serious environmental harm in major industrial accidents, but the huge quantities of fire water discharged in a very short time to get the fire under control.

What’s more, when such events occur, the water has a habit of finding routes to flow across a site in directions no-one had ever expected, let alone mapped, before ending up in a river or sewer.  Such a pollution incident can lead to crippling costs to pay for the cleanup and to put right the environmental damage, and most companies are unlikely to be insured against the losses.

To give an idea of the quantities of fire water involved, a fire at a plastics recycling operation in Smethwick in 2013, notoriously thought to be started by a Chinese lantern, needed 14 million litres of water simply to contain it, equivalent to six olympic swimming pools, according to the West Midlands Fire Service.

After the Buncefield disaster in 2005, the Health and Safety Executive found that protective bunding had many flaws that caused large volumes of fuel, foam and fire fighting water to leave the site.  The site’s last line of water pollution defence – so-called tertiary containment – was practically non-existent, amounting only to the sites surface drainage systems which were not designed to cope with any large-scale releases.  In July 2010 five companies were fined a total of £9.5 million for their part in the Buncefield disaster.

Of course, you may believe that catastrophes of such magnitude are unlikely ever to happen. Nevertheless, it’s no longer enough for organisations to feel lucky and take a punt that it won’t happen to them.  Given the financial and reputational risks, it’s clear that taking steps to avoid such a scenario is highly commercially advisable.

Furthermore, regulatory authorities are now clamping down with big fines and stricter expectations on organisations to provide proof of the measures they have taken to protect themselves and the surrounding environment.  If they cannot provide such proof then they may be forced down the route of expensive remediation that might otherwise have been avoided.

As government funding is cut back, environmental authorities are being forced to relinquish their advisory role and are increasingly enforcing regulations through prosecution.  Fines can be significant.  In the worst cases, a pollution conviction can even include the option of custodial sentences for company directors.

Sites that store or use hazardous or polluting substances, in particular, need to take steps to ensure they do not escape into the environment.  Pollution containment is critical for sites operating under the Control of Major Accidents and Hazards (COMAH) 2015 or Environmental Permitting (England and Wales) Regulations (EPR) 2010.  It should also be integral to any compliant Environmental Management System (EMS) – or for those companies working to IS0 14001.

These kinds of regulations are not restricted to the UK, of course; California’s Industrial General Permit 2014-0057-DWQ, for example, places the state’s industrial sites under similarly stringent environmental regulatory conditions.

In the early stages of a fire, thousands of litres of water are discharged into the environment every minute.  The surface water runoff created will pick up the pollutants and contaminants of whatever burning or hazardous substances are present, and if a site is not fully contained, they will escape into the local environment.

Even for sites where the substances stored are not hazardous in themselves, fire fighting water can still be a concern.  Vehicle and loading movements on- and off-site can also be a flashpoint for pollution spills.  Fires at waste handling and recycling sites have been a particular focus for concern in recent years, for example where metals or plastics are handled.  There is even the potential ‘worse case’ scenario of fire water and heavy rainfall combining to overwhelm a containment area.

The UK’s central industry guidance document for pollution containment was significantly revised in 2014 in the light of lessons learned, particularly from Buncefield.  At the time, I was invited as by the Environment Agency to advise on the publication of the new guidance based on my experience in the industry.  I was a member of the Project Steering Group and a number of the case studies were based on my experience and Hydro International provided a case study for best practice pollution containment for the document.  CIRIA 736 Containment Systems for the Prevention of Pollution sets out clear guidance on the steps to take for water pollution containment.

To provide water pollution containment, most companies begin by installing isolation valves in the outlets to surface water drainage to prevent flood or fire water escaping from the site and contain it until it can be safely removed and tankered away.  In addition sometimes bunds or physical barriers can be constructed, especially around hazardous areas, such as oil or chemical tanks to contain spills.

This is a great start – as long as the valves are of the correct design.  Often I see sites where a penstock valve is installed.  The word ‘penstock’ represents many types of valves that do not all have the ability to drop seal low pressure flows fully; if a site is looking to contain pollution then the valve must contain the entire flow.  Penstocks are closed by the force of the ‘head’ of water rising in the drain. That means that if the pressure is insufficient, then polluted water could still trickle through the opening and out into the environment.  Since 1998 I have developed many of the current containment valves on the market today. In 2013 I was involved in the development of the  latest Drop Seal Valve technology to provide a watertight, failsafe solution that has been installed at more than 150 sites across the UK.  The latest version is called the Hydro-Isolator® pollution containment valve.

So, with the right containment valves installed that should be job done, shouldn’t it?  Probably yes, for most small incidents. However, how do you know that in a serious incident, when flood or fire water starts to fill up your containment area, it won’t overwhelm the surface water drainage, overtop your bunds and flow out of those pathways you didn’t know were there? In its 224 pages, CIRIA C736 recommends that companies begin with a full assessment based on the source-pathway-receptor model to aid in a holistic containment strategy.  For many companies, both large and small, finding the time and expertise in-house to complete the necessary steps can be a challenge.

Hydraulic modelling techniques can be used to map the surface water pathways on and off a site.  Every client that we have worked with has been surprised by the results.  The beauty of hydraulic modelling is that it can be used to test out and prove any valves, bunds or temporary storages measures that are designed to ensure full containment of the site.  A solution can then be designed and constructed in the safe knowledge that any potential incident will be fully-contained.

Furthermore, operators end up with a professional, consultative document that can be presented to the Environment Agency, Fire Service and other regulators to provide evidence of robust pollution containment.  Now, you can really say “job done”.

Hydro International supports this approach, and it could be that an insurance underwriter is persuaded to discount premiums based on the evidence provided.  Even without this extra benefit, the proof of provided should be sufficient to see the advantages of effective risk management.

Click here for more information and to view this Fire Safety eBook
Playing with fire water?  It’s time to close in on pollution containment   By David Cole, Water Pollution Manager, Hydro International People are often surprised when I tell them that the most
Roz Sanderson
SHP - Health and Safety News, Legislation, PPE, CPD and Resources