Adam Bannister is Editor of IFSEC Global. A former managing editor at Dynamis Online Media Group, he has been at the helm of the UK's leading fire and security publication since 2014.
April 24, 2019

The Notre Dame blaze has been described as a ‘wake-up call’ for the guardians of the Palace of Westminster, with restoration works on the crumbling structure not due to start until the mid-2020s. 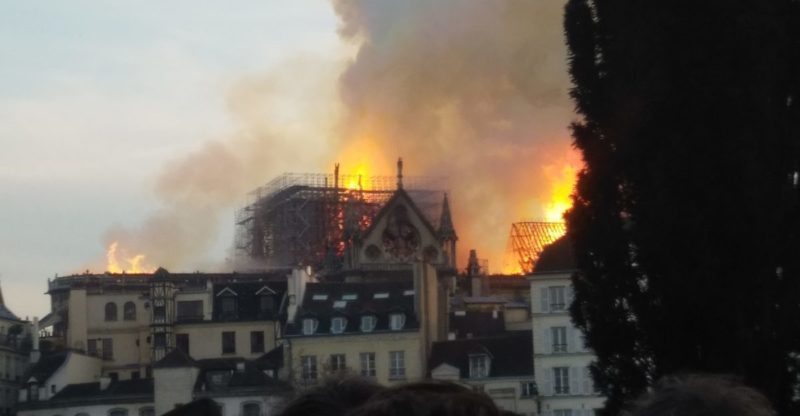 MPs and peers voted last year to vacate the venerable building while a multibillion-pound programme is carried out.

But the fire that ripped through the 850-year-old Parisian cathedral a week ago, devastating the roof and causing the spire to collapse, will surely have spooked those responsible for protecting historic buildings the world over.

Fires in heritage buildings are at once enormously costly in cultural and financial terms and uniquely vulnerable to myriad fire risks. Often built hundreds of years ago, any fire engineering they might have is unavoidably bolted on rather than built in from the outset.

This article collates advice on this fiendishly complex issue from the Fire Protection Association, Fire Industry Association and Devon and Somerset FRS – as well as a characteristically ill-informed suggestion to avoid from the current occupant of the White House.

The Notre Dame blaze, believed to have begun just below the roof, is believed at present to have been accidental.

Some officials have suggested extensive renovation works taking place at the cathedral might have been involved – with one expert in fire science noting a long history of churches, synagogues and temples going up in flames while under repair.

A lengthy, complex investigation will also examine the suitability of fire prevention systems and frequency and thoroughness of maintenance work at the cathedral.

A spokesman for Notre Dame insisted fire detectors had been installed “all over”, together with a computerised security system equipped with 24-hour surveillance.

Round-the-clock fire safety patrols have saved the Palace of Westminster from catastrophe countless times in recent years. Forty fires broke out, and were promptly extinguished by wardens, between 2008 and 2012 alone.

Given an ageing electrical system and lack of fire compartmentalisation experts have warned that fire could spread quickly and unpredictably through the neo-gothic building’s maze of shafts and corridors.

“Heritage buildings offer a unique challenge to the fire risk assessor and fire engineer,” according to an article on the Fire Industry Association website. “Historic buildings seldom have any significant fire engineering in them and are frequently used for a purpose completely different to their original intent. Often they are open to the public, which means we have to concentrate on means of escape.”

Older buildings also often have hidden voids and cavities supported by dry timber construction through which fire can travel undetected.

Said Paul Bray, Community Safety Protection Manager at Devon & Somerset FRS: “The challenges of fighting a fire in a terrace of ‘heritage’ or buildings of substantial age are substantial. The fact that the fire is hidden also makes it almost impossible to tackle internally and externally without a major dismantling of the building fabric.

How to mitigate fire risk in heritage buildings

So how can you mitigate fire risks in heritage buildings?

Said Paul Bray: “Even with the most attentive fire prevention and protection measures (such as fire alarms and fire separation), it cannot always be guaranteed that a fire will be contained and prevented from causing destruction. It can be significantly reduced through by the development of a comprehensive pre-survey of the impact on surrounding buildings during the construction phase.

Devon & Somerset FRS notes that there is no standardised format for recording or presenting the findings of a fire risk assessment. However, those responsible for protecting heritage buildings should always produce and regularly review clear and comprehensive documentation. Once the risks are identified and assessed, they can then set out to reduce them.

The Fire Risk Management in Heritage Properties handbook from the Fire Protection Association (published 2014) provides comprehensive guidance and advice on managing the risk of fire, fire risk assessments and complying with legal requirements. Aimed at all employees of heritage, traditional or listed buildings, it balance the imperative of preserving historic aesthetic features with the requirements for fire safety.

The Fire Industry Association wrote that “The fire industry understands the sensitivity needed to preserve the aesthetics of historical buildings and has provided solutions compatible with these environments.

In an article covering Fire Detection and Alarm, Emergency Lighting and Signs, it continued: “Above all, it is most important that heritage premises, like any other commercial building, comply with UK fire safety law to protect the staff, visitors and structure itself from fire.”

FIA on alarms: The BS 5839-1 “Code of Practice takes a broad brush approach and doesn’t give specific advice for heritage buildings. Neither the law nor the Codes of Practice say how fire detection and alarm systems can be installed and remain sensitive to the historic nature of these buildings. We clearly don’t want red cables or conduit visible on lovely facades and wireless systems offer an obvious solution.”

FIA on emergency lighting: “It is worth bearing in mind that required emergency light levels have increased dramatically since the late 1990’s. Regrettably, enforcers and installers were slow to realise this, which means that most emergency lighting systems in heritage building are lamentably poor.”

FIA on signs: “Operators of heritage buildings are often tempted to put extinguishers out of sight. Most people see extinguishers every day in workplaces and public buildings and, for the most part, develop a blind spot to them. If you’re tempted to hide them, you must still indicate their location with signs.”

Fire Systems for Historic and Heritage Sites offers advice on assuring orderly, safe evacuation and eliminating unwanted alarms to minimise visual or auditory disruption to the experience of tourists and visitors.

Marking the one-year anniversary of a fire that destroyed the UK’s oldest hotel – the Royal Clarence Hotel – Protection of historic buildings from fire emphasised the importance of conducting regular fire-risk assessments.

(In the wake of the Royal Clarence Hotel blaze, fire safety consultant Alan Cox posed a series of questions that need answering if lessons are to be learned.)

Donald Trump on how not to fight fires in heritage buildings

President Donald Trump, meanwhile, was roundly mocked after suggesting French firefighters should have deployed techniques used to tackle forest fires. Never shy of holding forth on topics in which he has no expertise, he tweeted that “perhaps flying water tankers could be used to put it out. Must act quickly!”

But Lt Col Michael Bernier, a Fire Chief from France’s civil defence organisation, said releasing even one load from a Canadair water bomber used to fight forest fires on the world-famous tourist site would be “the equivalent of dropping three tonnes of concrete at 250 kilometres per hour (155mph)” on” the ancient monument.

It would have caused the entire structure to collapse as well as endangering lives of firefighters and anyone in the area. “Neighbouring buildings would have been hit by flying blocks of hot stone, and the whole area would have had to be evacuated.”

Click here for more information and to download this eBook
Notre Dame wake-up call: The dos and don’ts of protecting heritage buildings The Notre Dame blaze has been described as a 'wake-up call' for the guardians of the Palace of Westminster, with restoration works on the crumbling structure not due to start until the mid-2020s.
Adam Bannister
SHP - Health and Safety News, Legislation, PPE, CPD and Resources