Ian joined Informa (formerly UBM) in 2018 as the Editor of SHP. Ian studied journalism at university before spending seven years in online fantasy gaming. Prior to moving to Informa, Ian worked in business to business trade print media, in the automotive sector. He was Online Editor and then moved on to be the Editor of two publications aimed at independent automotive technicians and parts distributors.
October 17, 2018

SHP caught up with London Luton Airport Fire Station Manager Paul Allen, to find out about a unique training course being run from the station to prepare staff on site how to deal with a potential terror attack. 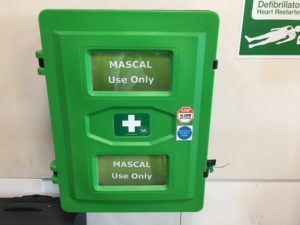 MASCAL, or Mass-Casualty training, came about following the Brussels airport attack in 2016, which killed 16 people. A large number of those victims died because of blood loss from lower limb injuries, caused by shrapnel from the device. This got Fire Station Manager Paul Allen thinking about how he could address that situation, should something similar arise at Luton. “With the number of staff on site, we should be in a position where we are about to stem blood loss and maybe save someone’s life while we wait for paramedics to arrive.”

The fire station is responsible for any emergency on the site, from dealing with aircraft, small building fires and medical emergencies. They need to be able to respond to any incident on the complex within two to three minutes from the time of call, substantially quicker than it would take for an ambulance to be at the scene. For that reason, the firefighters on the airport are all medically trained to just below the level of a paramedic.

Having studied the footage in the aftermath of the Brussels bomb, Paul set up a meeting with one of his first aiders to see if there was a course available to better prepare airport staff for such a situation. With nothing matching what they were after already on the market, Paul and his team set about creating their own course, using the previous military experience of two of his team, Paul Renforth and Matt Bryan. One was in the Territorial Army and the other was a former paratrooper and together they were able to utilise their skills and experience to design a suitable training programme.

Paul Renforth presented the ideas to airport CEO Nick Barton, the board and other staff within the airport, during which he outlined what they were looking to achieve. The idea was to put a series of MASCAL boxes across the airport, accessible to trained staff in an emergency. Paul explained what the boxes would be for, what they would contain and where they would be located. From this, Paul Allen was able to gain the support of his senior directors and ‘lean on’ other departments within the airport to enable him to gather sufficient budget to get the ball rolling on the project.

London Luton airport now has 14 green MASCAL boxes in strategic places within the terminal building, each containing about £1,000 worth of kit to enable the treatment of casualties following a major incident. Within each box are four bags, each containing tourniquets and military-style dressing, designed to treat injuries in a warzone. The boxes have a 10-year shelf life, are tamper-proof and placed strategically to avoid blasts, meaning they should always be accessible in an emergency. 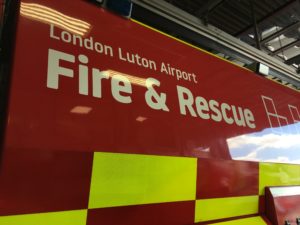 With a substantial amount of downtime, Paul looks for other ways to keep his team busy, compliant and to generate income for the station. With that in mind, he runs training courses, using some of the specialist skills of some of his team. Some of the courses on offer to airport staff include Compartment Fire Behaviour (CFBT) training, first aid, defibrillator training, manual handling and airline training. The training gives the firefighters a chance to bump up their salaries and keep their compliance up. The added income is an enormous help to Paul when it comes to running the station.

The newly designed MASCAL course would slot nicely into the station’s portfolio. Once the trio had come up with the course, each of the fire station’s four ‘watches’ were put through the training, the content being tweaked after each session, following feedback from the crew. This has culminated in an externally verified course which has gone through clinical governance.

With the full backing of the board, the course has been rolled out to all staff within the airport and made accessible to anyone who works within the terminal. “Those staff would be our critical first responders in the event of an emergency and so it’s crucial that they are up to speed with what we’re trying to do”, said Paul.

Paul added that the two-hour course has been designed in a way “to show the workers what they could face, without giving them the full horrors of a post-bomb attack”. The feedback has been overwhelming, both from a content perspective and from the enthusiasm in which Paul’s team of firefighters have delivered the presentation. The airport police, Special Branch, ground handlers easyJet Staff, Terminal Team and airport security have also undertaken the training over the 18 months since the project started.

Paul estimates that 65% – 70% of all airport staff have now gone through the MASCAL training and his trainers are now overseeing maintenance programme, topping up competence, with the courses running a little less frequently.

Such is the interest from around the country, the team are looking to bring more trainers on board with a view to rolling the training out to other airports in the future.