It’s not just the owners of a building that are responsible for upholding fire safety, and “ignorance is not bliss” when it comes to fire safety responsibilities, says Kizzy Augustin, Partner at Russell-Cooke.

Speaking at FIREX International, Augustin considered the legal ramifications of the Grenfell fire, and what it could mean for future fire safety prosecutions. 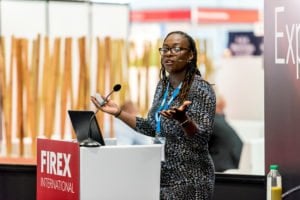 “Who are the duty holders?” asked Augustin. “Who needs to know about what’s going on in the law? For those of you who practise in fire safety, whether you’re practitioners, consultants, installers, whatever you do this affects you. Because it’s not just about fines for companies, it is about the possible imprisonment for individuals.”

The Grenfell Tower fire occurred just a year after a refurbishment of the bottom four floors and Augustin stressed the importance of duty holders being aware of their responsibilities.

“We are not just talking about local authorities and tenancy management associations. We are talking about duty holders who have been involved in a refurbishment, remodelling, installing, designing, constructing etc. There is a whole tranche of duty holders who could potentially be affected by fire safety investigations.”

She listed questions about how the duty holders acted: were residents of Grenfell heard when they complained about certain aspects of fire safety? Were fire authority regulators right to give the tower a medium risk rating? Did those carrying out the refurbishment fulfil all their responsibilities? These questions, she said, will be answered in the inquest and any subsequent prosecution, but her point was that “It’s very important for every duty holder within an organisation to know what their responsibilities are.

“Very few duty holders deliberately breach the law and deliberately disregard the safety of a premises. Most are trying to achieve a compliant approach, but things are very difficult. Through education I think we would be able to achieve that… Because you can’t use the excuse that you didn’t know. Ignorance is not bliss in safety law.”

At the moment there are “very few prosecutions” brought under Section 6 of the Health & Safety Act, which says that anyone supplying or installing has a duty to ensure that whatever they are supplying is installed in a way that doesn’t cause harm to the people that use it.

However, says Augustin, “I think that will change because of the likes of Grenfell. We are not looking just at the owners of a building or the person in control of the building. There are many other duty holders we rely on.”

Enforcement, says Augustin, could see huge fines based on the new sentencing guidelines introduced in 2016.

“At the moment fire authorities are exempt from the sentencing guidelines because they felt that they have enough sentencing powers to sentence suitably. I think post-Grenfell that will change.

“One of the main criticism’s from Judith Hackitt is that enforcement powers are not robust enough. They won’t create new enforcement powers – they’ve got them and they’re working. Million pound fines are acting as a huge deterrent to a number of organisations and individual duty holders.”

Most fires will fall into the top category when establishing a risk of harm, as there is always a risk of death in a tower block fire. For a large organisation (one with a turnover of over £50 million), a Category A offence will have a starting point of a £4 million fine.

“Most duty holders won’t be comfortable with this sort of fine, but this is the regime that might well be adopted post-Grenfell.

The contrast is seen when comparing a similar fire and another offence tried more recently. The Lakanal House fire spread through a number of flats in a South London block in July 2009, killing six residents and injuring at least 20 more. Southwark Council was given a £270,000 fine after pleading guilty to four charges of breaching safety regulations.

Haslington Hall in Cheshire, meanwhile, was the subject of a prosecution carried out several weeks ago. There the owner of the listed building, which was used as a wedding venue, was jailed for 20 months for his failure to take general fire precautions.

“Have we learned from Lakanal House? Perhaps not, because a similar fire has happened. The question is why?” asked Augustin. “We’ve got to look at culture, and I think from Judith Hackitt’s point of view culture change is very important, but we’re not going to get there just by saying it. The review is great on paper, but we don’t really know how we’re going to get there as a fire safety industry. It’s looking at educating those at the top who can influence down. In health & safety we’ve had it for years – leading from the top. It’s about understanding what you are meant to do as a duty holder, as an organisation and as an individual.”

Grenfell could spark more prosecutions for extended duty holders It’s not just the owners of a building that are responsible for upholding fire safety, and “ignorance is not bliss” when it comes to fire safety responsibilities, says Kizzy Augustin, Partner at Russell-Cooke.
Edward Perchard
SHP - Health and Safety News, Legislation, PPE, CPD and Resources

If I was CDM Coordinator on this project I would be feeling quite scared now.

I wouldn’t. On the face of it (given the scarcity of detail in news reports) this looks like a case of “value engineering” gone wrong. It was common practice under CDM2007 for Principal Contractors to “value engineer” finished designs without informing the CDM-C of these “design changes during construction”. Replacing fire resistant cladding with its flammable equivalent would be a “no-brainer” for someone looking to minimise costs.

The question also has to asked, given that new buildings are required to have water sprinklers fitted, then why did the government in power at the time of these changes decide that existing buildings were exempt from the change. Interestingly this was the Labour Government of Brown and Blair. Putting cost savings first were they. Clearly both should be hanging from a rope.

I feel there is still along way to go in designers and Clients understanding their duties to meet CDM. Also who what is the old CDM C the new Principal Designer. Kept in the dark most of the time!