Jamie Hailstone is a freelance journalist and author, who has also contributed to numerous national business titles including Utility Week, the Municipal Journal, Environment Journal and consumer titles such as Classic Rock.
June 26, 2019

Fire safety community has to ‘get on board’ with technological changes

The next generation of tall buildings being constructed around the world will require new ways of fire-fighting, an expert has warned. 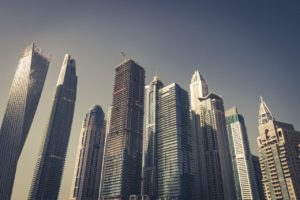 Speaking at FIREX International, the Chief Executive of Tall Building Fire Safety, Russ Timpson, said the fire safety community has to “get on board” with all the technological changes that are happening around the construction of tall buildings.

Mr Timpson said that around 541 new tall buildings, over 20 floors high are going up in London over the next five years alone.

“We are going to see significantly more tall buildings,” he told delegates. “They will be taller, more complex and vertical villages. They won’t be single use anymore.

“They will have offices, apartments and viewing galleries all in the same building.”

He also quoted the example of the proposed Sky City building in the Chinese city of Changsha, which has been designed to stand 838 metres tall with 202 floors and house 30,000 residents.

“The architect said you can be born, grow up, meet your partner and get a job all without having to leave the building,” said Mr Timpson.

But he added that new materials, like timber will be used in the construction of tall buildings in the future, particularly as nations look to reduce their carbon footprints.

“We are going to build tall buildings out of timber,” he insisted. “It’s going to happen. It’s a natural material, but the challenge is we have to do it safely.

“The fire safety community has to get onboard and you will see a tall timber building coming to a city near you very soon, and it will probably have lots of greenery on the outside.”

He also raised the idea of having a fire safety rating system for buildings, similar to the ones already in place for energy and sustainability.

And he warned that construction fire safety in the UK is “very poor”.

“I spend a lot of my professional time going around doing fire safety audits on tall building sites, and it’s very poor here in the UK and we are lagging behind other countries.

“I strongly feel we will have a tall building construction fire here in the UK and construction workers could be killed.

“Only the other day, I was on a building on the 30th floor, and when I asked ‘where is the wet riser?’, they ‘said there is no wet riser on this building, there is only a dry riser, but it finishes on the 20th floor’. How the hell do you expect fire fighters to fight fires on construction sites when they have no access to water?

‘If we have 541 tall buildings being built [in London], then we better have a serious look at construction fire safety.’

He also added that architects need to do away with assembly points outside buildings, because they are dangerous.

“In a world of new dimension risks, I think they are a terrorist target. We all have to move to a philosophy of evacuate and disperse,” he explained.

“When you leave the building, you should signify you are doing that via your smart phone and disperse. We need to move and embrace technology.”

And Mr Timpson also predicted that drones will play a much larger role in fire safety in the future.

“I can see high value tall buildings having a drone built into the building itself. It will be activated by the alarm system, go and find where the fire is. We are probably not far away from that and it could be part of a standard fit for tall buildings going forward.”

Click here for more information and to view this Fire Safety eBook
Fire safety community has to ‘get on board’ with technological changes Tall building fire safety expert warns that construction fire safety in the UK is currently “very poor”.
Jamie Hailstone
SHP - Health and Safety News, Legislation, PPE, CPD and Resources

Hi Russ,
Neil O,Connor of MHCLG said that “ we must do what is right , it is common sense” with respect to changes in design criteria for future buildings and refurbishment of HRRB’s and other residential buildings. How as a group of professional bodies can we get together and integrate possible changes ( eg. Sprinklers in all HRRB’s, 2nd Stairs for fire fighting and alternative means of escape, fire fighting refuge lobbies on all floors) without a change in prescriptive legislation?
Reg. 7 changes exemplifies this,
Paul Bussey
RIBA, FIFire E

The entrance/exit doors in the UK are mostly fitted with the traditional letter plate for mail deliveries. This is a publicly accessible opening element and it undermines the vital specifications of the door, including security, fire resistance and environmental. Putting an unprotected letter plate on a fire entrance/exit door runs the risk of utterly catastrophic consequences. And with these doors, the fire could be easily started by arson through the letter plate if someone wanted. RISCAuthority regards arson as a problem that has grown since the 1950s to the extent that over 40% of all fires in industry and commerce… Read more »