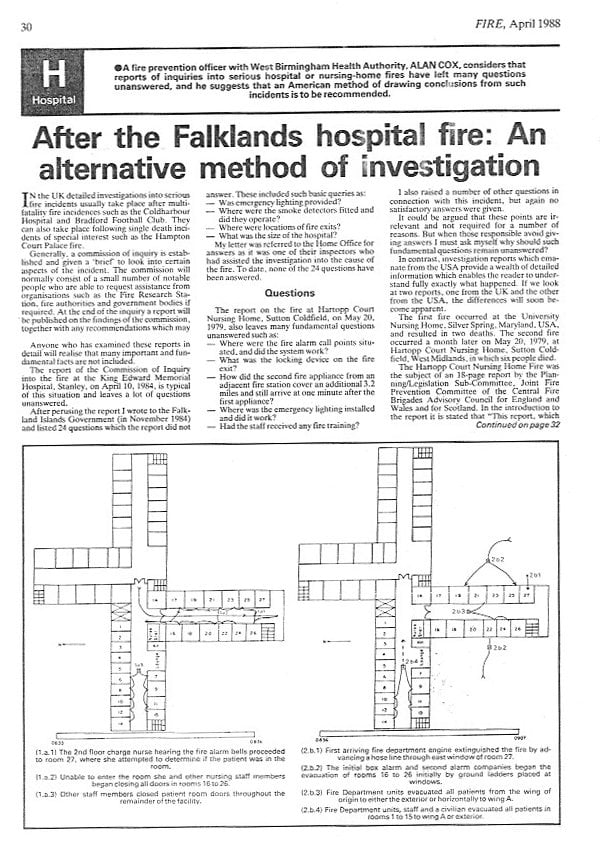 The original newspaper cutting investigating the fire at the Falklands hopsital

When an investigation into a fire on the Falkland Islands was halted, Alan Cox thought that was that. Some years later, investigating a fire elsewhere, he came across an incredible coincidence.

I have just returned from a visit to the Falkland Islands that was partly for pleasure and partly to see what has happened since the fire at the King Edward Memorial Hospital in 1984 where 8 people died.

The official cause of the fire is described in the following paragraphs “We have eliminated arson, the electric heater in the bathroom, an electrical fault, spontaneous combustion of the mattresses stored in the rooms, and an external source of fire as the causes of the fire. We are left with the probability that the fire must have been due to an accidental internal source of fire, inadvertently caused by either a patient, member of staff or an intruder.”

At this time I had keen interest in hospital fire safety and having studied hospital fire safety in the US and fire investigation I had a look at the official report and tried to apply a system of mapping used in the US to the official report but because this report did not contain the information that I required I wrote a letter to the Falklands Islands Government asking 24 questions that would enable me to complete the investigation. As the report had been done by one of the HM Inspectors of Fire Services the letter was sent to them but despite several reminders they never answered those questions, which was quite disappointing.

The questions were fairly simple questions such as What type of fire alarm was installed, what was the method of securing the fire escape doors, where were the fire hydrants, was emergency lighting installed and what was the size of the hospital – it was quite surprising that a report like this into a fatal fire did not cover these critical aspects. One of the other questions that I asked was about the actions of a certain individual who was a member of HM Forces who had been identified by the “mapping system” as someone who during the fire did not fit the timeline but as the Home Office declined to answer any questions I could not take it any further.

As I thought that the whole question of fatal fire investigation was in need of improvement I wrote an article describing the “mapping” system used in the US in Fire and this was published in April 1988. The article looked at the fire in the Falklands together with the fire at Hartopp Court in 1979 and looked at how, in comparison to fatal fire reports in the US, what we had in the UK left a lot to be desired.

Some years later I was asked to investigate a “non fatal fire” at a private hospital and during the investigation I asked to see the staff records of the persons that were on duty at the time of the fire. One name came up that I recognised from my investigation into the Falklands Hospital Fire and his records confirmed that he had been there at the time of the fire. In view of my investigations I felt that the case should be reopened and I wrote to HM Government presenting the new evidence but they showed no interest in reopening the case so I took the information to the media who presented the facts to the public.

Shortly after this information was published I received a call from the Falklands Island Police who indicated to me that they had never believed that the fire was accidental and that they would like to come and see me, which they subsequently did and were able to answer all of my 24 questions. I was also informed that this individual had been present during a number of fires at military bases where he was serving together with the fact there was no appetite for reopening the case by HM Government because of the cost and reputational issues.
When this individual was questioned he admitted two cases of arson at the private hospital and was sent to a psychiatric hospital.

In 1989 police opened a new investigation into the Falklands Hospital Fire and this person was charged with the manslaughter of 8 people but the judge ruled that the jury could not be told about the two cases of arson at the private hospital or the incidents that happened on army bases where he was stationed.
At the end of the trial he was acquitted.

It was interesting speaking to some of the Falkland Islanders because none of them believed the official report that the fire was an accident and some had a very vivid recollection of the fire. Obviously, in a small community like this these incidents are hard to forget.

Alan Cox is a consultant and during his career has worked for Warwick County Fire Service, West Midlands Fire Service, West Birmingham Health Authority, where he was responsible for developing a computerised hospital fire evacuation program that was used in many major hospitals. He also worked for HSBC before setting up his own fire and safety consultancy in 2005. During his career he has published a number of books on fire safety and made many specialist technical videos on subjects such as hospital evacuation, fire protection of electronic data protection areas, fire doors, and mail room safety.

Click here for more information and to view this Fire Safety eBook
Fatal fire investigation and an amazing coincidence When an investigation into a fire on the Falkland Islands was halted, Alan Cox thought that was that. Some years
Safety & Health Practitioner
SHP - Health and Safety News, Legislation, PPE, CPD and Resources

‘I help keep kids safe, and there is nothing more rewarding,’ SHP meets Jenna Merandi