Coping with the moving target of high rise buildings

Simpler and more readily-available information is needed for firefighters and residents to react to fires and other emergencies within high rise buildings, says US fire expert Curtis Massey.

Massey, a former firefighter and one of the first responders at 9/11, is now one of the world’s top high rise fire instructors.

Grenfell, he told the FIREX International conference on Thursday (21 June), has brought high rise fires into the public eye, but such fires will keep happening: “Complacency rules the day. It’s the reason most people perish in these fires, and after Grenfell it’s the government who should be sitting in this theatre. 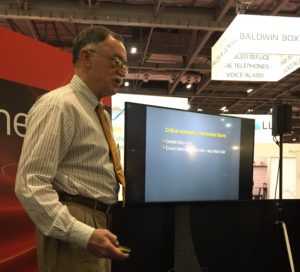 “These fires are going to happen again and again and again. Because we can’t learn from history and the people who make these buildings are allowed to get away with murder, sometimes literally.”

Summarising a number of recent high-rise fires, such as the fire at New York’s Trump Tower in April, Massey highlighted the threat presented by the buildings and how first responders have to contend with a lack of information to fight the fires.

At Trump Tower only one man was killed, though it would have been much worse had the Fire Department of New York not been able to send 150 firefighters to the blaze within 30 minutes. In all but a handful of cities, he said, that wouldn’t have been possible.

In Honolulu, Hawaii, for example, where less than a month after Grenfell a fire on the 26th floor of a tower block killed three people.

These dangers are both perpetuated by poor building standards and a lack of information for firefighters and residents. “They’re building buildings in London with one stairwell. You need one for fire attack and one for evacuation,” said Massey.

To get to a fire on the 15th storey of a building, firefighters will be unravelling 50-metres of hose, and with heavily-equipmented crews heading to the fire, a single-stairwell building can quickly be impassable: “If we’re going up, you’re not coming down.”

Massey showed a picture of a training exercise and how stairwells act as a funnel for smoke. As soon as a door opened, clouds of would-be toxic smoke rose several floors and cut off all visibility in a cramped space already full of firefighters.

He listed some recent fatal North American high-rise fires: six dead in a Chicago office building, five dead in two New York apartment firs and six in a Toronto hotel fire. All 17 victims were found in an ‘attack stair’, well above the floor containing the fire, dead from carbon dioxide poisoning.

The danger, he says, is “repeating the same mistakes over and over”.

Not knowing about the makeup of buildings can also harm the response of firefighters. Building managers, Massey said, often offered blueprints, but the information they need is not in there, and in any case, firefighters are not trained to read such documents.

Response would be greatly aided by easy-to-read, easy-to-digest diagrams that they can put to use, containing just the vital information: where to get water, how to ventilate the building and how to get in and out.

This information can also be used to inform other emergencies like gunfire, flooding and terrorist attacks, so that emergency services can know where to evacuate and where to send police instantly. To do that, says Massey, they need the information to be available.

Massey, through his company Massey Disaster Planning, has developed an app that provides this information and enables building owners to send messages and orders to residents, letting them know where not to go, either to avoid harm or to let emergency services do their job.

The app allows building managers and the emergency services to set and view preplans and view specific instructions created to coincide with specific incidences. The app is being used in most major North American cities, but is not available outside of America. But, says Massey, this level of planning and information is essential to prevent the multiple deaths that can arise from high-rise incidents.

Access your free download
Coping with the moving target of high rise buildings Simpler and more readily-available information is needed for firefighters and residents to react to fires and other emergencies within high rise buildings, says US fire expert Curtis Massey.
Edward Perchard
SHP - Health and Safety News, Legislation, PPE, CPD and Resources

‘A catalogue of fire risks’ found at Victoria Coach Station