Ian joined Informa (formerly UBM) in 2018 as the Editor of SHP. Ian studied journalism at university before spending seven years in online fantasy gaming. Prior to moving to Informa, Ian worked in business to business trade print media, in the automotive sector. He was Online Editor and then moved on to be the Editor of two publications aimed at independent automotive technicians and parts distributors.
November 20, 2019

Bolton fire: ‘A reminder of the depth of issues within England’s building regulations and fire-safety regime’

In the aftermath of a fire which ripped through a block of student flats in Bolton on Friday night, a fire safety expert has said that sound understanding of building and fire science is needed. Meanwhile, Greater Manchester’s mayor has called the cladding on building a cause for ‘concern’. 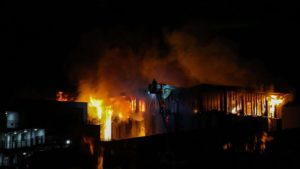 A fire has partially destroyed the Cube building in Bolton, home to over 200 students. Two people suffered minor injuries in the blaze, which broke out at 20:30 on Friday 15 November.

Urban Student Life (USL), the firm which manages the property, said that around 200 firefighters tackled the blaze and that a full evacuation of the building took place. An investigation into the fire is now underway.

In a statement, it said that will be working with the University of Bolton to provide temporary accommodation and emergency supplies for the affected students.

“Valeo USL is deeply sorry that the fire in the Cube building it operates in Bolton has displaced all of the 221 students that were resident in the building and is of course concerned about the distress and disruption that the blaze has caused to the lives of those students.

“Valeo USL’s first priority has been for the safety and security of the students who were resident in the building and Valeo USL’s on the ground team led the evacuation of the students and assisted the fire and rescue services throughout the night and today. Thankfully it appears that the prompt response of our staff and the amazing work of the emergency services has meant that the residents have remained safe.”

Greater Manchester’s mayor said that while the cladding on the building was not the same as the aluminium composite cladding (ACM) material used at Grenfell Tower, where 72 people died in 2017, he told a press conference on Saturday that it did have a form of cladding that “raises issued that will have to be addressed”.

“We know that the prime minister is visiting later and we will be looking to work with him to understand what happened last night and see if we need to go further to remove cladding from these buildings and give families peace of mind,” he continued.

It’s believed that the material used in Bolton is high-pressure laminate (HPL). The government has been accused of downplaying the risks associated with HPL cladding, some critics have said.

The Guardian has reported that within the last two weeks there has been calls for the removal of HPL panels, similar to those used at the Cube, which the government has dismissed.

Some of the residents affected by the fire have also criticised the fire alarms in the building, saying that they are a cause of confusion. One resident told the BBC that fire alarms go off “almost every day”.

The Fire Protection Association (FPA) has highlighted that the incident provides a stark reminder that the problem facing UK fire safety is the result of many issues, and not just Grenfell style ACM cladding. A number of key concerns have already been raised, such as the part played by HPL and timber cladding components on the building, the fact that combustibility bans should be based on risk of buildings rather than height, and changes to the regularity of tests being carried out on high integrity alarm systems.

Jonathan O’Neill, Managing Director of the Fire Protection Association, commented: “The fires at the Bolton student block, Worcester Park in London and the Beechmere care village in Cheshire, prove we cannot be housing people in buildings made from combustible materials. This issue needs to be addressed urgently; it simply cannot wait. We urge this issue to be a priority for the new Government.”

The FPA is particularly concerned with why fire and building regulations have to solely be related to height – ‘risk is a combination of many factors, of which height is only one’.

Spread of the fire

USL said that the rear block of the building, which is in two blocks, was where the fire occurred. “The fire started on the rear block on level 4 and spread to the 6th floor. The floors below have considerable water damage,” an initial statement read.

First responders expressed their concern at how fast the fire spread. Assistant Chief Fire Officer Dave Keelan, of Greater Manchester Fire and Rescue Service (GMFRS) said: “The fire… really did spread very quickly and that was evident to see on the footage that’s on social media.”

In another statement, The General Secretary of the Fire Brigades Union described the way in which the fire appeared to travel as “deeply troubling”, and called for a “complete overhaul” of UK safety standards.

“This is not how any building should react to a fire in the 21st century, let alone a building in which people live,” he said.

How is this not headline news??? Over 200 students homeless with absolutely nothing. Personally, all I have is the pajamas I was in as I ran out my flat and my phone that was in my hand as I smelt smoke. This is mental I have no idea what to do now… #boltonfire pic.twitter.com/8TkB4ZQktt

Fire-safety expert Tom Roche, Senior Consultant for International Codes and Standards at FM Global, said that the fire is a reminder of the depth of issues within England’s building regulations and fire-safety regime. “The quick spread of the fire, injuries, the need to help evacuate people and the damage caused should rightly prompt renewed concern about the performance of numerous buildings in the face of fire.

“The HPL cladding used was clearly combustible. The discussions around the height of the building and whether it was within certain parameters of the building regulations guidance may be important from a technocratic perspective but to all those watching the end result was the same; the fire clearly spread up the building. It did not matter whether it was 17m or 18m, it failed to stop the fire from spreading across its external surface, making both the property and its inhabitants extremely vulnerable to a fire.

“This failure highlights the importance of properly testing building materials for their intended use, irrespective of height. Most importantly, there is a need to ensure that those involved in designing and refurbishing buildings have a sound understanding of building and fire science. This should drive the proper selection of materials.

“In recent months there have been a number of significant fires that have destroyed or severely damaged a building that was used and enjoyed by many people. The Cube fire has repeated that pattern as there are many people now displaced and seeking alternative accommodation. This impact will continue for many months. Quite plainly this building was not resilient to fire and again we would renew the call that regulations need to change to consider property protection.

“Moving forward, we must hope that building owners take account of a clear lesson from The Cube fire; that to protect their properties from fires they must go beyond current life-safety focused regulations – building resilience, and resulting in a better outcome for all.”

Click here for more information and to download this eBook
Bolton fire: ‘A reminder of the depth of issues within England’s building regulations and fire-safety regime’ In the aftermath of a fire which ripped through a block of student flats in Bolton on Friday night, a fire safety expert has said that sound understanding of building and fire science is needed. Meanwhile, Greater Manchester’s mayor has called the cladding on building a cause for ‘concern’.
Ian Hart
SHP - Health and Safety News, Legislation, PPE, CPD and Resources