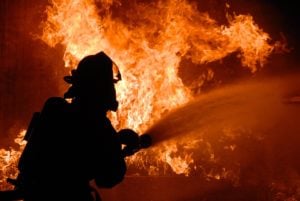 One of the most important sessions on the day examined the Grenfell Tower tragedy and its implications for the fire protection sector.

Mr O’Neill discussed the background of the FPA’s attempts in the lead up to the fire to change government policy, with 14 June 2017 turning the “world upside down”. With no review of building regulations in 14 years, he shared the FPA and insurers’ own document that was created as a response.

He also addressed the work that the FPA had done to lobby government, such as the Safe Futures campaign of 2013, before discussing modern methods of construction (MMC) and their risks, specifically in terms of the use of combustible materials in increasing quantities within the structure, insulation, and cladding of buildings.

Howard Passey discussed competency, the responsible person, the role of the Regulatory Reform (Fire Safety) Order 2005 [FSO] in defining both elements, and the Hackitt Review’s recommendations on this, including the Joint Competency Authority (JCA).

His view was that a “safety case will need to be produced” that “layers of protection” through guidance would be required; and that the implementation and management of the JCA would be a “massive undertaking”.

As previously reported by SHP Online, the ABI’s Director of General Insurance Policy, James Dalton, used his speech at Fire Summit 2018 to argue that government plans to ban the use of combustible materials for all new high-rise residential buildings taller than 18 metres, “runs the risk of unnecessarily limiting the public safety benefits” that the proposals are supposed to achieve in the first place.

Graham Watts from the Constructive Industry Council also spoke about the Hackitt Review saying when Dame Judith commented the UK was “behind other parts of the world and lacked a coherent approach” was “being kind”.

Mike Wood, independent consultant, joined the construction debate with a presentation on the importance of fire doors, commenting “as a developer I want to be able to sleep at night”.

Perhaps understanding, there was an overwhelming air of uncertainty during Fire Summit 2018’s Brexit session.

Anthony Burd, Head of the Built Environment at the British Standards Institute started by saying that “for us, it’s business as usual” as not much will be changing with standards, but as he believes firmly in continuity, if the Brexit negotiations result in a no deal, guidance on trade would be affected.

Paul Pope, Director of the Fire Industry Association, believed that the fire industry effects are a risk to business, because “potential recertification could happen” and this could affect orders dramatically, as 80% of global trade needs product certification.

He commented that we “really don’t know what it means for us” so we must prepare for the worst. Howard Passey, Principal Consultant at the FPA stated that at this stage “nobody knows” what the implications are, so it’s important that as laws could be changed “at a whim”, the fire industry must undertake “effective surveillance” on government changes.

Rounding off the day’s talks, FPA chair Chris Hanks stated that “Grenfell’s profound effect” was still being felt 18 months later and acknowledged that there were still challenges to face.

He also stated that it was both the FPA’s and the insurance market’s belief that current controls “are not working and are not fit for purpose”, and a “culture change” is needed.

The FPA is holding its Hackitt Review Update Seminar in central London on Monday 3 December.

The event will examine the implications on British Standards and testing, product selection and legislative change and the impact this may have on business, the event is aimed at those concerned with the implications of the Government response to the Hackitt Review.

The event will be chaired by BAFE’s Douglas Barnett and speakers include:

Professor Richard Hull from the University of Central Lancashire and Nigel Chantler from the Residential Sprinkler Association.

“And we want assurance that systems are in place to regularly review building standards to ensure that the UK can never experience a tragedy on the scale we witnessed at Grenfell – on our or any future generations’ watch.”

Access your free download
The heat is on – looking back at Fire Summit 2018 One of the most important sessions on the day examined the Grenfell Tower tragedy and its implications for the fire protection sector.
Jamie Hailstone
SHP - Health and Safety News, Legislation, PPE, CPD and Resources

We desperately need an official/legal definition of “combustible” because there are almost no materials that are will not burn given the degree of fineness, as powder, fine fibres, or conventionalcross sections, plus high enough temperatures. The thermite reaction for instance involves rust on steel and aluminium dust, and concrete dust forms explosive mixtures. The definition must therefor include the permissible form in which the material is used, where permissible depends on an agreed test of a complete element and where grades of acceptability may be needed for particular applications. One would also like a move lessening perfect safety where this… Read more »