Sprinklers must be made mandatory for all residential new-builds, says LFB

The London Fire Brigade (LFB) is urging the government to make the installation of sprinklers mandatory on all new-build residential developments – whatever their height. 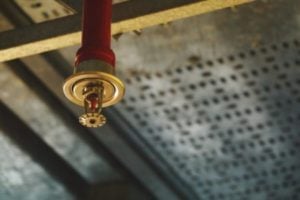 Only two out of 15 of new tower blocks in London had sprinklers installed during spot checks made on developments for which planning applications were made in 2016.

The LFB says the failure of so many developers to heed its advice to fit sprinklers on new residential developments proves the industry “cannot self regulate” and that developers are “consistently ignoring” advice.

At present sprinklers are only a legal requirement in England in new residential blocks taller than 30 metres. The LFB wants the government to bring English law into closer alignment with Wales, where sprinklers are mandatory in all new domestic buildings, and in Scotland, where they are compulsory in residential buildings – including care homes, sheltered housing and schools – above 18 metres.

However, the government is so far – to the dismay of many fire safety experts as well as the LFB – maintaining that a sufficient level of fire safety is achievable without retrofitting sprinklers.

“Sprinklers save lives, they’re not a luxury,” said LFB Commissioner Dany Cotton, who expressed hope that new legislation will be introduced after a government consultation on building regulations, which ends in March. “We think they’re essential in every high-rise building, and in places where our most vulnerable residents live – places like care homes.

“The LFB are campaigning on vital things like sprinklers because we think that no community should ever have to suffer in the way Grenfell has.”

Labour’s housing spokesperson Sarah Jones said: “It is outrageous that developers continue to ignore our fire services – and that the Government let them. The government cannot continue to deny councils the funds for retrofitting of sprinklers by claiming they are non-essential.”

Housing Minister James Brokenshire said: “I will be considering all submissions, including the LFB’s, carefully, in informing next step. There is nothing more important than ensuring people are safe and feel safe in their homes and I welcome LFB’s input into our consultation on fire safety regulations.”

Click here for more information and to view this Fire Safety eBook
Sprinklers must be made mandatory for all residential new-builds, says LFB The London Fire Brigade (LFB) is urging the government to make the installation of sprinklers mandatory on all new-build residential developments – whatever their height.
Safety & Health Practitioner
SHP - Health and Safety News, Legislation, PPE, CPD and Resources