Adam Bannister is Editor of IFSEC Global. A former managing editor at Dynamis Online Media Group, he has been at the helm of the UK's leading fire and security publication since 2014.
October 1, 2019

One in two (51%) care home workers who reported fire safety concerns were dissatisfied with the actions (if any) subsequently taken, according to research released today. 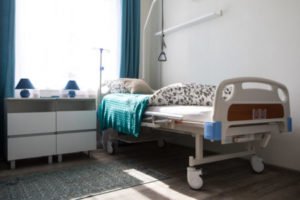 56% percent said they have reported concerns about fire safety in care homes.

“These highly concerning findings underline how crucial fire safety is, and the fundamental role that fire doors play – especially so in light of recent instances of damaging care home fires which have threatened the lives of residents,” said Helen Hewitt, Chief Executive of the British Woodworking Federation, which organises Fire Door Safety Week.

Fire doors must withstand fire for 30 minutes, validated by test evidence, to be classed as compliant. Survey respondents predicted, on average, that it would take 25 minutes to evacuate their care home, with a quarter expecting it would take longer than 30 minutes.

Continued Hewitt: “Evacuation strategies in care homes are very specialised, accounting for the fact that many residents will need assistance. These strategies rely on the ability of fire doors to perform their function in holding back fire and smoke to allow adequate time for rescue.

“We all need to feel protected inside buildings, and especially so when we are asleep. Care homes and other specialised housing provide a living place for some of the most vulnerable people in our communities.

“The companies and other operators that run and maintain them have a responsibility to ensure their residents’ safety – and as an industry we need to continue to provide our expert support to ensure the correct specification, installation and ongoing maintenance of fire doors. We hope that through raising awareness during Fire Door Safety Week, lives will be saved through a reappraisal of fire doors and safety arrangements in multiple occupancy buildings.” 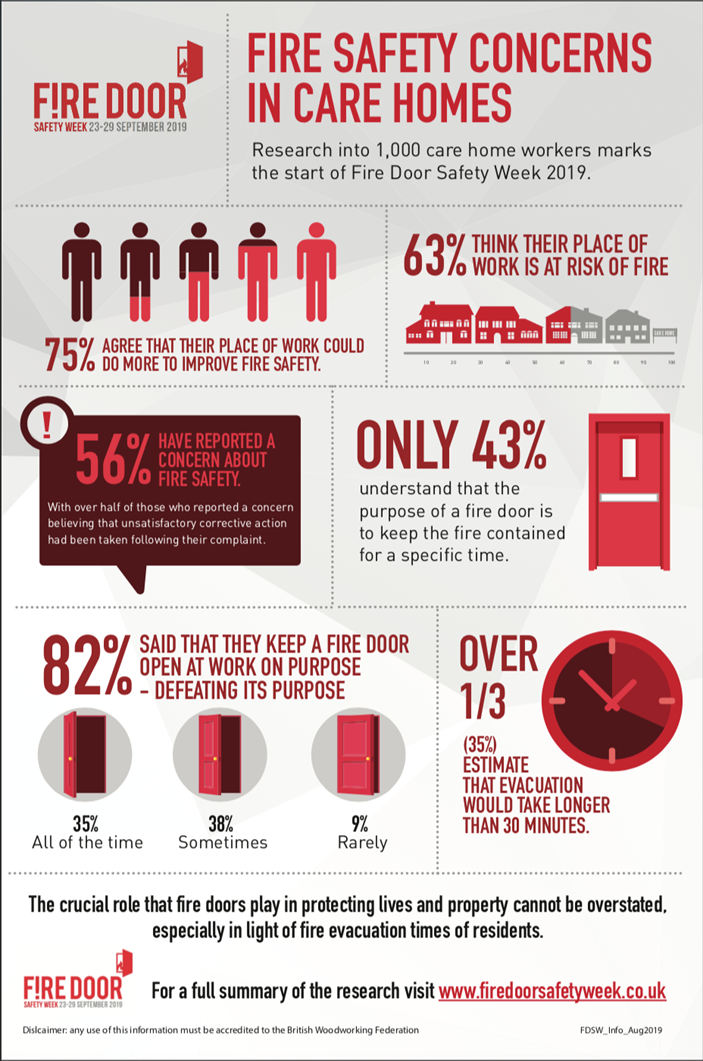 Most care home residents are elderly with poor mobility and eyesight – which is often exacerbated by medication. London Fire Brigade (LFB) has ramped up inspections of care homes in the capital this year.

“Earlier this year we found that of 177 care homes inspected in London, a third had inadequate or poorly maintained fire doors,” said LFB Assistant Commissioner, Dan Daly. “These are one of a number of measures that need to be in place to help keep people safe from fire.

“We would urge all care home providers to ensure that they have a proper and up to date fire risk assessment and ensure they know what to do in the event of a fire to help protect some of London’s most vulnerable residents.”

Now in its seventh year, Fire Door Safety Week is focusing on buildings where people sleep for its 2019 edition, including those housing society’s most vulnerable members. As well as care homes this includes children’s homes, sheltered housing, houses in multiple occupation and communal properties.

Fire Door Safety Week, which is backed by the Home Office’s National Fire Safety campaign and the National Fire Chief’s Council, kicked off yesterday with an interactive mock criminal trial. Organised by the London Health & Safety Group (LHSG) and Russell Cooke Solicitors the event was designed to help various duty holders identify and mitigate against potential liabilities in the event of a fire.

The campaign has also launched a hard-hitting video underlining the powerlessness of tenants and residents to protect themselves from fire if responsible authorities fail to heed and fulfill their responsibilities – see below.

Landlords can also learn how to comply with the law and protect residents and other building occupants using a free toolkit of resources, also of use for tenants and anyone else with an interest in fire safety.

Helen Hewitt said: “Every year, Fire Door Safety Week raises awareness and helps save lives. We need to root out fire doors that are ill-fitted, damaged or poorly maintained and ensure that all buildings are equipped with fire doors that are fit for purpose.

“Tenants and residents need to have confidence in them and have clear guidance about fire safety plans and measures, and be able to report concerns that are then actioned. The time has come for all parties to fully play their role in the critical matter of fire safety.”