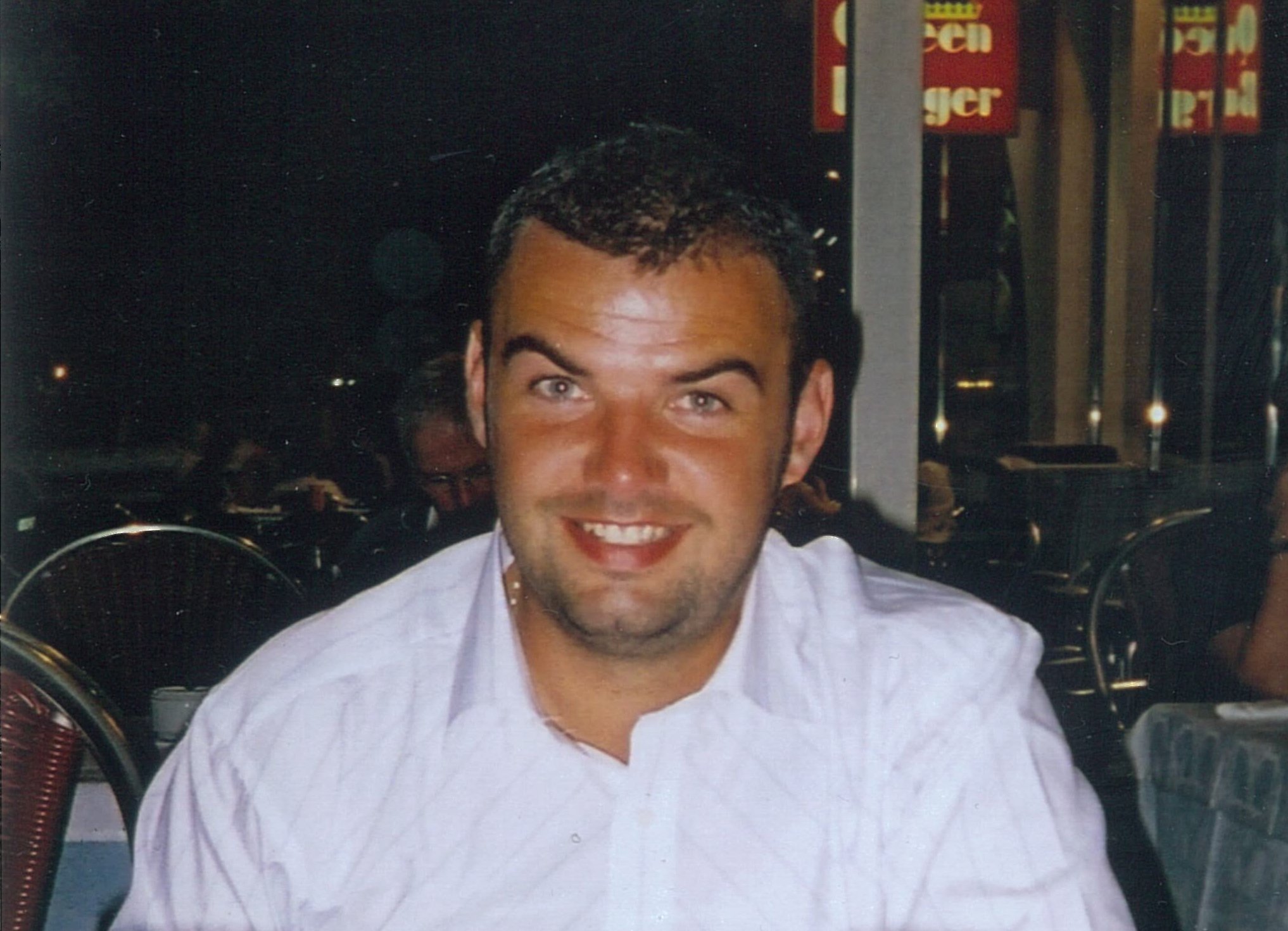 Louise Taggart bravely tells the story of her brother Michael, fatally injured at work, in the hope of helping raise awareness of the fundamental importance of safe systems of work.

“Michael’s been in an accident in Dundee. We’re on our way to the hospital.”

Those were the words my  mum said to me on the evening of 4th August 2005.

Assuming it was a car accident, I didn’t ask, during the brief call, what had happened to Michael.

Later that evening, I kissed my wee brother’s forehead and said goodbye for the last time as he lay dead in a hospital bed, with barely a scratch on him.

He hadn’t been in a car accident – he’d been electrocuted at work.

Michael was an experienced spark, 26-years-old and engaged to be married.  It had never for one minute crossed my mind prior to his death that he might leave for work one morning and not return home. Yes, of course electricity is dangerous, but it can – and should – be worked with safely…shouldn’t it? 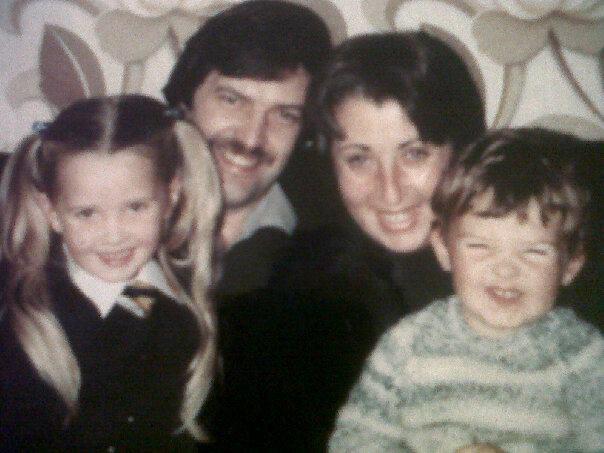 He had cut a cable marked ‘NOT IN USE’, which was in fact wired into a distribution board and was not safely isolated.  It took more than three years for the case against the company that employed him to get to court, and for us to find out the fundamental failings in implementing safe systems of work that led to Michael’s entirely preventable death.

The HSE press release issued after the trial outcome said: “Michael Adamson’s death could have been prevented had his employer ensured that safe working practices were being carried out in accordance with the company’s own written procedures.”

I’m driven by the need to have no-one else ever have to hear those or similar words.

I want his story to reinforce why safe systems of work need to be in place, not only on paper, but also in practice.

The method statement of my brother’s employer said that “before working on electrical equipment, it should be isolated and secured by means of a padlock”.

However, the devices for lock-off/tag-out were not provided by Michael’s employer.  Instead the practice on site was to use insulating tape.

The HSE’s specialist electrical inspector wanted to get hold of examples of the lock-off devices to show as evidence at the trial.  He was asking for them in Edinburgh, in major industry wholesalers, and at every turn he was being told “Nah mate, sorry, we don’t stock them.  No demand from industry for them.”

This fundamental safety procedure, each spark had been taught during his or her apprenticeship for around 20 years prior to Michael’s death, was not being implemented by the electrical contracting industry.

So, a key failing appeared to be an industry-wide one.  But there were also a catalogue of other failures specific to Michael’s employer, including a failure to ensure he and the other sparks on site had access to the testing equipment they needed in order to do their jobs safely. 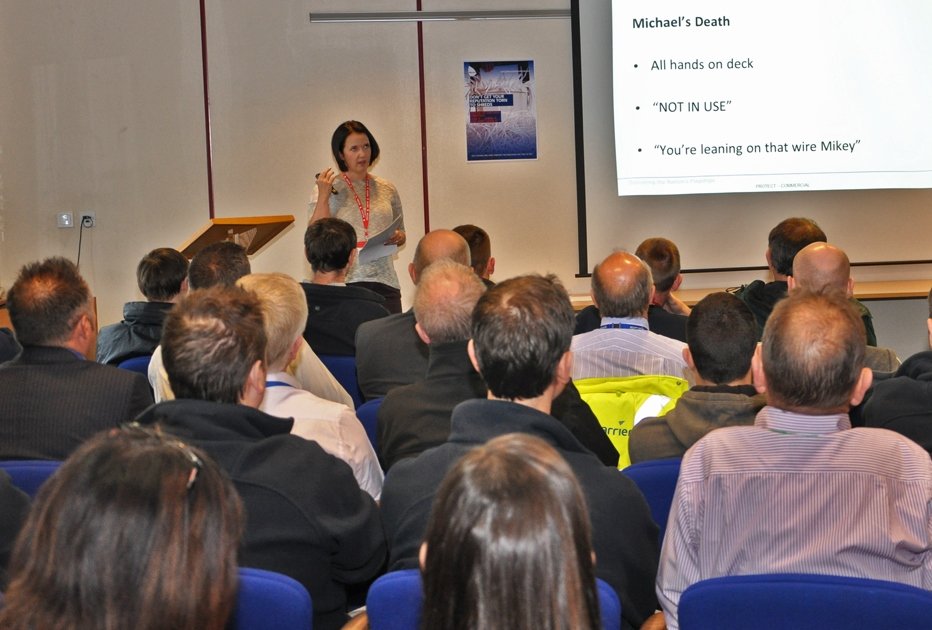 In addition, the risk assessment for low voltage electrical work was described by the mechanical project manager as a “living document”.  Well, during the course of the fit-out, the distribution boards were energised and work on them continued.  However, the risk assessment was not revisited and was described by the HSE as “completely inadequate”.

And there was a critical failure in supervision and management. The electrical supervisor was to tell the HSE during his investigation interview that “I don’t regard it as part of my job to ensure safe working practices were adhered to at all times.”  I consider that to have been a fundamentally important part of an electrical supervisor’s job.

As well as Michael’s employer being charged with breaching the Health and Safety at Work Act, so too were the managing director, operations director and technical services manager. Mistakes were made by the prosecutor. Those three individuals were to walk free from the dock. The lawyer for the company then referred to his client as being the “invisible man” now sitting in the dock.

It didn’t take too long for the jury to find the invisible man guilty as charged. But that provides my family with little in the way of justice, and nothing in the way of comfort.

So that’s why I want to tell his story: to stop this from happening to anyone else, and to stop any other family from having to go through what we have gone through, and will forever continue to go through.

I want his story to reinforce why safe systems of work need to be in place, not only on paper, but also in practice.

I want it to reinvigorate supervisors and management in the role they must play in driving safe working practices.

I want it to give people the courage to speak up when they see something unsafe.

And, above all, I want Michael’s story to stay with people for a long time, sparking conversations and actions and contributing in whatever small way to people going home safe to their loved ones at the end of every shift.

It makes me sad and angry in equal measure to repeatedly have to read stories about work-related deaths that “could and should have been prevented had the employer ensured” that proper risk assessments were undertaken; or that adequate training was provided; or that machinery was properly guarded; or that a safe system of work was being followed; or that its own written procedures were adhered to.

Michael was a son, a brother and a fiancé, who should by now be a husband, an uncle and a dad. I can’t bring him back. So my biggest hope is that, through the telling of his story, it stops any other family from having to walk in my family’s shoes.

Should you think the telling of Michael’s Story could help further enhance the safety of your colleagues, Louise can be contacted at [email protected] to discuss.  Or, for more information, visit www.michaels-story.net.

Great article – I have had the privilege of working with Louise when she shares Michaels’ Story with those working on our sites be it core employees, contractors, client representatives, Apprentices and cannot thank her enough for her ongoing support and remain amazed at her strength of character to share Michael’s story in such a full, frank and personal fashion which in itself is inspirational. Michael’s death like so many others, could and should have been prevented – there are lessons to be learned and not only from an electrical perspective. We just need to step back, reflect, look, listen… Read more »

Sadly there are too many stories like Michael’s. Employers not providing a SSOW, inadequate risk assessment, poor supervision…same old, same old. Only until convictions properly reflect the severity of the offence in terms of fines and custodial sentences will we see a change in attitudes. Yes, there is an element of ‘it won’t happen to me’. However, enforcement is the key to deter others who can’t be bothered with ‘elf and safety.

A friend of mine was also electrocuted and killed during the course of his work. And although it was almost 20 years ago and H&S and its application has supposedly improved, it is clear that there are still many cases of ‘common practice’ being used every day rather than the correct procedures. Businesses are all too happy to overlook this because works have to be done, there are deadlines to meet and it is almost always expected to be done quickly, as long as no one gets injured or killed, companies are only to happy to declare ‘we have a… Read more »

My son Daniel was killed in 2003 at the age of 17 it took 5 years and a judicial review to get his employer to court and after all that he had a 10 month jail sentence . I see his employer regularly running the same business nothing has changed for him while our lives have been completely ruined mentally physically and financially a never ending sentence imposed

Anthea, I recall this tragic and avoidable case and it must be very painful for you. It reminded me of the Simon Jones tragedy (can’t bring myself to say ‘accident’), another young man whose life was taken needlessly by an employer who should have ensured his health, safety and wellbeing. I don’t understand why in both cases the CPS were reluctant to prosecute. Don’t know all the facts with Daniel’s incident, but at 17 he should not have been carrying out high risk work unsupervised. It appears the employer got off lightly with a 10 month sentence in comparison with… Read more »

I have to applaud Louise for her bravery in doing what she is doing for raising awareness about workplace safety systems . I can assure you that it is not in vain . This has brought back memories about the “accident” that happened to me over 20 years ago . Coincidentally I was also 26 years old and an electrician too . In my case all systems were in place , ppe provided , tools and equipment available but ignored all of this and paid heavily for my choices . I made contact with 11000v while working at height .i… Read more »