Forget GDPR. You are emitting data and you don’t even know it

Diversity of thinking is essential when it comes to security. That’s according to Dr Pippa Malmgren, the founder of DRPM Group and a former adviser to the White House. 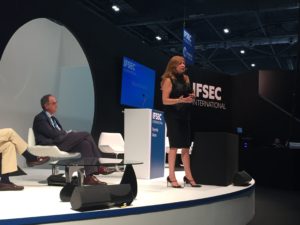 Speaking to delegates in the Keynote Arena at IFSEC 2018, running alongside Safety & Health Expo, she took part in a thought-provoking masterclass on how the world is becoming increasingly data driven and why our understanding of situational awareness needs to change. The masterclass was chaired by Edward Lucas, Columnist at the Times. It also included a section by Professor John Mallery, Research Scientist at MIT and involved full section of audience comment and participation.

The biggest vulnerability we all have is that we tend to follow the same patterns of thinking, it was said during the masterclass. But we are in a period where computational power is key to being secure.

Two weeks ago the Americans announced they have a new computer called Summit. That supercomputer can do the same calculations it would take a human being 63 billion years in 1 second. China’s Tianhe-3, due in 2020, will be capable of at least a billion billion calculations per second.

“If you think your passwords are safe, think again. The only person who isn’t going to know your password is you. This world is one where you are giving away data. Forget GDPR. You are emitting data but you don’t know you are.”

Seams of clothes increasingly have RFID chips inserted in them, revealing exactly where the wearer is. Mobile phones, meanwhile, can identify the user from the way he or she walks.

You are constantly emitting data without even realising it; if you walk passed a camera in a shopping mall, even when you go to the cinema. Why have a test audience when cameras can capture the emotions of a live one.

The masterclass discussed how artificial intelligence can now use computational power to connect the dots between the silos of previously generic data, meaning people are no longer anonymous and generic.

The most valuable start-up in the world, according to a masterclass participant, is the Chinese AI company SenseTime, which specialises on analysing faces and images on an enormous scale.

Shared workspace companies are also attracting huge values as cameras capture data about how people behave in the workplace.

“This ubiquitous data environment is something we all need to get a grip on if we’re really going to think seriously about resilience and understanding the world around us,” it was said.

One way to think about it is all these data points create a polygraphic data sphere. It will give you a clearer view of reality than you could ever have looking at reality itself.

In the masterclass it was said that one problem with data is that it is quite backwards-looking so it is essential to look at the qualitative as well as the quantitative.

Resilience will be strengthened if you put both together. Having the data alone will not give you the correct answer.

Listen to the webinar for free
Forget GDPR. You are emitting data and you don’t even know it Diversity of thinking is essential when it comes to security. That’s according to Dr Pippa Malmgren, the founder of DRPM Group and a former adviser to the White House.
Safety & Health Practitioner
SHP - Health and Safety News, Legislation, PPE, CPD and Resources