Apprentices: Building blocks for the future 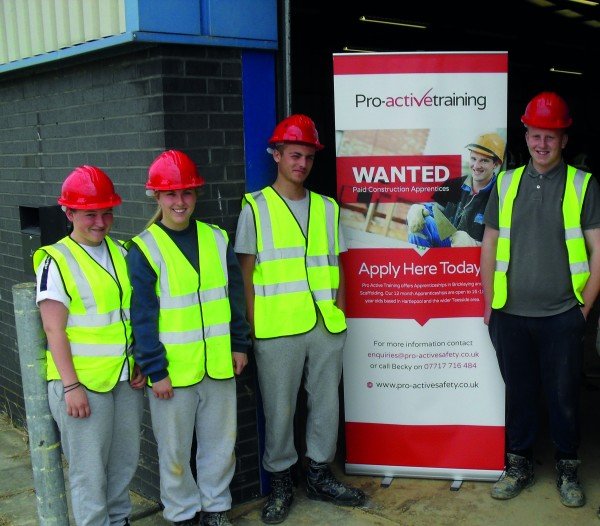 Brickwork Services Limited (BWS) is a major supplier of bricklayers in the Northeast and works with all of the major primary construction companies in the local area.

As Steve Willis, CEO of Brickwork Services, points out: “The construction industry has suffered an acute shortage of qualified bricklayers in recent years and this has been primarily due to a lack of apprentices coming into the industry over the last decade.”

BWS has partnered with longestablished training provider Northern Construction Training (NCT) and Hartlepool-based health and safety consultancy Pro Active Safety Ltd to foster the growth in apprentices for the sector.

NCT is based in Newcastle and has been successfully training 100-120 construction apprentices each year for the last six years. Pro Active Safety has built a strong local reputation, offering northeast-based companies advice and guidance on health and safety-related issues.

The partnership began in late 2014, when NCT approached BWS to see if it could offer 10 of NCT’s Newcastle-based apprentices work placements, which meant the individuals could complete their apprenticeships. In December of that year, Pro Active Safety health and safety officers inducted the apprentices before placing them on a construction site in Newcastle and South Shields.

Since then, all of the apprentices have been regularly monitored on site by qualified NVQ assessors, and have received on-going health and safety training from BWS site supervisors, which involves weekly health and safety toolbox talks and site-specific training

For instance, on the Newcastle site BWS bricklayers had to be trained in the use of powder-actuated tools to fix ties to steelwork; the apprentices attended the training and received a certificate of competence to add to their NVQ portfolios.

Future planning
The success of the joint venture has prompted BWS to plan for the future and it is offering eight apprentices full-time employment once they complete the programme later this year.

Rob Morton, operations director at NCT, said: “It’s been fantastic working with BWS over the last year. The company shows so much commitment to training apprentices, it’s like a breath of fresh air to the industry.”

In recent months, the partners have decided to expand the scheme to cover a BWS site in the Tees Valley area. After months of searching, a suitable location was found and a team of workmen was given the task of renovating a disused factory in Hartlepool.

“Location was very important. We wanted the centre to be close to bus and train routes so we could accept applications from not only Hartlepool but also the surrounding areas,” said Mr Willis.

After only six weeks, the newly refurbished training centre opened its doors in July 2015, offering an eight-week traineeship in bricklaying. Traineeships are designed to prepare young people aged between 16 and 18 for their future careers by helping them to become ‘work ready’.

Invaluable knowledge
Social media and local youth support groups were used to advertise for suitable students. However, other campaigns were also used. One that involved placing posters in local fast food outlets proved to be particularly successful, with 90 young people coming through the doors on the first morning.

Many of the students had never worked before, so the traineeship will enable them to gain invaluable knowledge and skills in bricklaying. The partners’ aim is to provide the students with work experience on local construction sites over the eight-week period.

However, for this to happen the students first have to pass their Construction Skills Certification Scheme (CSCS) test and a Pro Active Safety team has worked with the students to assist them in preparing for this test.

Health and safety training
Throughout the traineeship health and safety will form a major part of the students’ learning. Construction sites can be extremely dangerous environments to place young people. For this reason, it is vital that the programme ensures that students are fully trained before they start work on site.

The students will have to complete a raft of health and safety training during the eight-week programme. Initial training in basic health and safety is reinforced by Pro Active Safety’s tailored training package, which includes asbestos awareness, safe abrasive wheel usage, facefit testing, ladder awareness, safe manual handling and working at height. The students also have to sit a one-day IOSH working safely qualification.

Throughout the training students are assessed and offered guidance and advice to help them achieve their own personal goals. After successfully completing the programme, 60 students will be offered a place on the BWS apprenticeship programme. The 30 students that have not been successful will work away from the traineeship and will gain valuable experience and a BWS health and safety passport, which records all the health and safety training the students have received. The passport can be viewed on the BWS website and is designed to show future, prospective employers what the students can do.

Starting this September, the successful candidates will join a full framework bricklaying apprenticeship. This includes a diploma and NVQ level 2 in bricklaying and functional skills. The 60 students will be split in to two groups of 30, with one group based in the training centre studying for the diploma and the other out on site with BWS bricklayers collecting evidence for their NVQ. Again, the apprentices will be fully inducted on all site-specific health and safety issues by BWS supervisors. The groups will rotate each month to embed both practical and theory in to the apprenticeship qualification.

Partnership for success
The primary reason this scheme has been set up is to provide BWS with future bricklayers. The partnership hopes to better the 80 per cent success rate achieved by the previous Newcastle-based apprenticeship programme – in real terms this would mean over 50 young people would progress into a career in construction.

“We are not training young people just for the sake of training. We are offering them the opportunity to get real jobs in an industry that can continue to lead the UK out of the recent recession,” said Mr Willis.

Working with local authorities, the partnership hopes in the future to work with unemployed people and ex-service personnel to give them the health and safety training that enables them to return to work.

The partnership is also planning to offer young people in the northeast further opportunities. Discussions have already started with local scaffolding and building companies to start a scaffolding and general operatives’ traineeship/ apprenticeship before the end of the year. The future looks bright for young people on Teesside.