Ian joined Informa (formerly UBM) in 2018 as the Editor of SHP. Ian studied journalism at university before spending seven years in online fantasy gaming. Prior to moving to Informa, Ian worked in business to business trade print media, in the automotive sector. He was Online Editor and then moved on to be the Editor of two publications aimed at independent automotive technicians and parts distributors.
September 3, 2018

One fan was taken to hospital and another four were injured trying to get into Sunday’s Old Firm game between Celtic and Rangers at Celtic Park on Sunday. 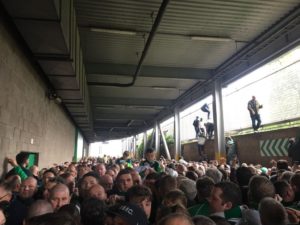 The hospitalised fan was injured after falling from a wall, thought to be trying to escape crowd congestion, while the other four were treated at the scene.

It’s been claimed that the stadium entry points had been changed and many Celtic supporters were said to have been forced to climb over a high fence to escape the resulting crush.

The indecent happened about 20 minutes prior to kick-off with hundreds of fans caught in a two-way correfoc under the stadium’s North Stand.

Chief Superintendent Brian McInulty from Police Scotland said a “dynamic situation” unfolded in the build up to kick-off but ‘police and stewards reacted quickly’.

Celtic Football club and the local police have said they will be reviewing their procedures. The club released a statement which said: “We are aware of the issues caused by congestion prior to kick-off. We are pleased that stewards and police were able to assist quickly and we thank our supporters for their patience shown while the matter was being dealt with.”

A police statement said: “We work closely with Celtic Football Club to ensure the safety of all fans attending matches, We plan and practise various scenarios to ensure that if an incident occurs it will be dealt with a quickly as possible, as happened in this case.”

Reacting during the incident, police set up a cordon to prevent further fans accessing the stadium using that entrance.

Get your free ticket today
Five fans injured in ‘crush’ incident at Old Firm derby One fan was taken to hospital and another four were injured trying to get into Sunday’s Old Firm game between Celtic and Rangers at Celtic Park on Sunday.
Ian Hart
SHP - Health and Safety News, Legislation, PPE, CPD and Resources