Dr Tim Marsh PhD, MSc, CFIOSH, CPsychol, SFIIRSM is MD of Anker and Marsh. Visiting Professor at Plymouth University he is considered a world authority on the subject of behavioural safety, safety leadership and organisational culture. As well as many of the world's most recognisable industrial names Tim has worked with diverse organisations such as the European Space Agency, the BBC, Sky TV, the RNLI and the National Theatre in his 25 year plus consultancy career. He has key noted and chaired dozens of conferences around the world including the closing key note at the Campbell Institutes inaugural International Thoughts Leaders event in 2014. He has written several best-selling books including Affective Safety Management, Talking Safety, Total Safety Culture, the Definitive Guide to Behavioural Safety and Organised Wellbeing. Previously he led Manchester Universities ground-breaking research team into behavioural safety methodologies in the 1990s.
December 14, 2020

Or, why I really hope I’ll be seeing you at a drinks reception soon… 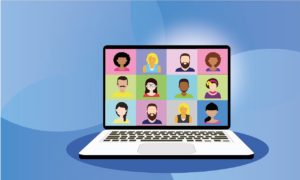 Recently I’ve been involved in some panel discussion that seemed to have been as well received as anything I’ve ever been involved with. (Including a session on Safety Culture for SHP’s Webinar Wednesday series). Several have had a substantial three-figure audience and kind comments have come in afterwards from all over the world, including New Zealand and Africa, with some delegates commenting explicitly that ‘attending this excellent event was only possible because it was online’.

More than that, the panelists logged were in their local pub, walking the dog or otherwise relaxing at home within minutes of it finishing. (Except for a panelist from Texas who, having risen early, went off for brunch!). Again, the very real benefit to work life balance and spending quality time with loved ones was clear.

However, though Zoom conferences are here to stay, I’m increasingly certain that they will remain, for several vital reasons, merely an important element of the “thought share” field. Indeed, I suspect that once the pandemic is under control, they will return to be a small element quite quickly.

In her book “Regional Advantage”, about the tech companies of Massachusetts and Silicon Valley, AnnaLee Saxenian makes the case that back in the 1970s bigger, more profitable East Coast companies looked so much better set up to be a commercial success than those shoe string – set in a region that was once full of apricot farms, based in a garage – affairs on the West Coast. However, in a mystery of modern economics, it, of-course, didn’t work out that way at all and the few companies from the Valley have done quite well indeed! (Almost none in Massachusetts even exist today).

The difference, she suggests, was that out East the businesses were spread along a highway quite a distance apart with few obvious after workplaces to congregate. Nearly everyone worked – then went home. However, out West, they tended to go to a cluster of bars and clubs to ‘hang out’ and share ideas. Steve Jobs’ right-hand man (the legendary Steve Wozniak) claims the best idea he ever had – the microcomputer – came to him at a homebrew beer club.

Does there really have to be beer and/or coffee involved now given the technological advances?

For example, the equally legendary Chris Briggs of JCB once told me that he attends conferences for ‘nuggets’ saying that if he’s inspired to note something with the thought ‘now, that I can use!’ only two or three times in a two-day event then he’s a happy delegate. This shouldn’t be compromised online – especially as the opportunity for follow up questions or even follow up ‘networking’ sessions are now ever more structured. And after all we’re all inspired by books and plays written by long dead writers, who we obviously can’t hit with clarification questions.

However, any experienced presenter or delegate knows that the best questions, conversations and connections don’t happen at formal Q&A sessions, or even formal networking events, but invariably ad-hoc in corridors, bars and over coffee. (Though quite possibly directly following a formal network event!) As the old advert – where we cut from the over-confident on-line sales team to a clearly warmer round table discussion – has it “there’s just no substitute for actually being there”.

Is the ‘So Convenient’ Honeymoon Period Already Over?

I think I’ve already noticed a clear trend. ‘Presenting’ at a recent conference where every year there have been 300 plus in the room, I’ve noticed there were only 100 online. Two days later at a conference where there are always around 100 in attendance just 30 online. So, these events are convenient – but already proving surprisingly unpopular.

And, of course, not every ‘black box’ has someone paying full attention behind it because there’s a self-selection ‘echo chamber’ effect at play to an extent. Making the effort to physically attend events means ‘getting your monies worth’ is a priority and to do so ‘since we’re here’ we sit in on talks we might not. Online we cherry pick talks we think will be of interest and crack on with other things like work mails or social media. (Then there’s that chap from CNN caught addressing other temptations and distractions!).

I can think of dozens of talks at live events where I really wanted to nip out to make calls but felt I couldn’t because I was sitting in the front row – then found I was glad I hadn’t. (How can I not have seen the relevance of Arjen’s theory of planned behavior before? And this, ironically, introduced in a talk on presentation skills. Or the vital importance to culture of the concept of ‘taboo’ – both raised in talks I’d have skipped based on their titles).

I’ve developed a habit of paying my £10 and watching Newport County by ‘live stream’ on a Saturday afternoon – texting old friends watching online back in Newport as I do. This is good fun – especially as we keep winning at the moment – but the first chance I get I’ll be stood next to them on a terrace again even though it’ll involve the time and expense of a 400 mile round trip and some seriously dodgy coffee and pies. So, whilst I need to queue on the M6 (or at Manchester airport en-route to an event) like an extra hole in my head I find I’m relishing the chance to do so again soon and I think I’ll not be alone in that.

Finally. I can only speak for myself as a presenter, but whilst interactive panel discussions are almost as much fun online as off (and are attracting large appreciative audiences) if I never have to present something I have passion for and think important to a sea of utterly inert black boxes ever again… it’ll be too soon!

Listen today!
Zoom conferences and COVID-19 Tim Marsh discusses how, despite the relative success of conference calls and webinars during the pandemic, he hopes to be seeing you at a drinks reception soon...
Tim Marsh
SHP - Health and Safety News, Legislation, PPE, CPD and Resources

I think it’s “Ajzen’s Theory of Planned Behaviour” (ref in article is Arjen)…?

Hi Tim, thanks for your article, there are many points to reflect on, but I just wanted comment on one if that’s okay? If we believe that non-verbal cues are an important aspect of communication, the little black box, generally sat down approach may affect communication. Dr Stephen Porges’s polyvagal theory posits that to feel safe and build trusting relationships, we need close contact and in particular eye contact. So, it would appear that your in the bar theory, has some science to reaffirm, what I imagine most of us would anecdotally agree with. With a bit of luck, your… Read more »

Hi Simon – thank you and yes. There’s been recent research that suggests the absence of / slight lack of sync RE micro expressions is stresseful for all and very stressfulf for some … Tim

Hi Tim. I think the more creative and comfortable we get with the technology, the better online conferences will be. Recently I ran an event for 80 civil servants. I had breakout sessions going, with the nominated ‘speaker’ giving feedback from their discussion on chat, I ran a series of polls, we used the raised hand function and got dialogue going on chat. My sense is that people could really get engaged with the session and the material in a way which they would struggle to do in a live session. I took more questions than I would normally do… Read more »

All very salient points Nick.But I still think: A) it’ll contribute to the (pre-existing) mental health crisis. And B) I’ll never learn to enjoy presenting to a sea of black boxes!