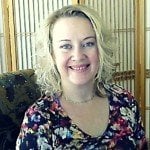 Dr Flis has a BA SSc and a PhD in organisational social psychology and is passionate about helping people who lead and work in organisations create better workplace experiences and improving work cultures. Get free resources and tactics on appropriately dealing with negative online and offline workplace behaviours at www.drflis.com or contact Dr Flis at[email protected] or  LinkedIn. You can also follow Dr Flis on her blog Twitter or Facebook.
September 13, 2016

Is the ability to recognise the difference between a bully boss, tough manager or incompetent supervisor important to workplace safety? Dr Felicity Lawrence explores the ways employees can recognise bullying traits in their boss. 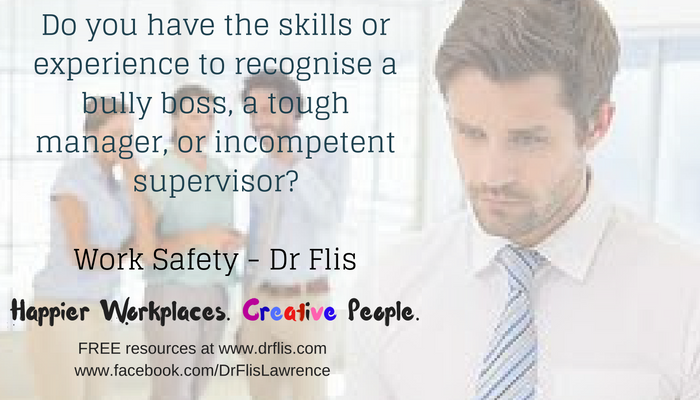 Surprisingly, the ability to quickly identify if your boss is a bully, a tough manager, or is socially inept – or perhaps a bit inexperienced and incompetent – is a skill that can be crucial to your career prospects, and to workplace safety. This type of skill allows you to accurately place the different traits and to quickly decide on the best interaction strategies. Even more importantly, this skill provide insight into how different types of bosses impact workplace safety.

In brief, tough managers may exhibit highly directive (sometime grating) communication styles yet are generally focused on working with people. From their perspective, people deliver results so it makes sense to create a safe workplace where individuals feel confident in raising issues before these manifest into costly problems. A bully boss is more focused on gaining power, protecting their turf and maintaining personal control. While bully bosses are also focused on delivering results, their abusive treatment undermines people’s confidence. Individuals working to bully bosses tend to feel less confident about raising potential work issues and workplace safety gradually erodes over time.

Recognising an incompetent or clueless boss

Some bosses can have the best of intentions, yet are clueless about why their plans aren’t working. Nor are they interested in hearing why. Research has found that incompetent or inexperienced co-workers, supervisors or managers can have a negative impact on other individuals and the organisation, and erode workplace safety.  The general rule of thumb is to watch your boss over time and view the content, context and the consistent outcomes of their behaviours. For example, you might initially be wary if your boss stuffs up your performance bonus. However if you find out your boss did so because of an oversight, and once this was reported to them, they did their best to rectify it, then you may be dealing with an inexperienced or incompetent boss.

8 signs you’re dealing with an incompetent or clueless boss:

Managers who are a bit incompetent and socially inept can sometimes first display as unethical. This could be due to a number of factors such as inexperience, low emotional intelligence, and only basic communication skills by which to understand, and communicate, the “why” behind their actions.   Socially inept bosses are so uncomfortable dealing with people they prefer to deal with their team through email.

This could include job requests, project changes, or the more sensitive performance appraisals. In this way, socially inept or inexperienced bosses have the capacity to undermine workplace safety as this behaviour can foster confusion, mistrust, and place other team members in the unenviable position of stepping up to fill the leadership gap. Unfortunately, this kind behaviour then leads to more confusion about roles and responsibilities.

1.    Your boss may appear nervous in large groups, stutter, blush, look at their feet (or your feet) when talking, struggle to hold one-on-one eye contact, or glower in a slightly aggressive or hostile way.
2.    In social situations, your boss may do or say something socially awkward, silly, slightly aggressive or inappropriate.
3.    Rarely initiates conversations and if they do, are very clumsy and tend to only ask questions that can appear intrusive or hostile. This can be confused with the “vague boss” who is so focused on their own thoughts and “in the clouds” that they struggle to maintain the thread of a conversation.
4.    Tends to look a bit desperate or remote during conversational pauses.
5.    Are unable to maintain a conversation without a lot of help from other people.
6.    May interact only through email or telephone. Face-to-face interactions may be conducted in a slightly aggressive or aggrieved manner, because they feel so uneasy talking directly to others.
7.    Rarely leaves their office other than to come to work or leave to go home.
8.    Appears to have few workplace networks and appear as a bit of a loner.

Tough bosses are generally equally respectful, or tough, with his/her colleagues and subordinates. Note that this behaviour may change if someone stands in the way of their ability to deliver. To reassure a tough boss that tasks are being delivered to schedule and budget, arrange a meeting and sit down to clarify what they expect from you, and how to report progress and raise issues.

1.    They are equally tough on everyone, including themselves.
2.    Clearly interested on delivering results for the organisation. Their intentions are crystal clear and without manipulation.
3.    Is focused on delivering results because they have been given a clear mandate to do so from their boss(s).
4.    Their communication style may need polishing, but their delivery focus is consistently clear.
5.    Will help you deliver their goals, and will expect individuals to step up and help them deliver good results.
6.    Thanks people for outstanding work because they know simple forms of recognition and valuing people’s hard work results in loyalty and/or individuals continuing to strive.

1. Lying and withholding information. Repeatedly lying, prevaricating and consciously not telling the truth.
2. Intimidation and mood swings. Overt or covert (veiled) threats around salary, bonuses, staff allocation, budget, allocation of programs etc. and creating a work environment where employees feel that they’re walking on egg shells due to the frequently and unexplained changing moods and emotions.
3. Ignoring or isolating staff. Consciously ignoring or avoiding a specific member of their staff for no apparent reason.
4. Rationalisation and projection of blame. Excusing and rationalising bad behaviour by blaming one or more members of their staff.
5. Minimisation. Minimising, discounting, or failing to address a staff member’s legitimate concerns or feelings, and undermining the person’s confidence in raising workplace safety issues.
6. Diversion. Dodging issues or pretending to be oblivious to workplace safety issues that are important to other members of their team.
7. Shame, guilt and criticism. The bully boss will shift responsibility of an issue onto a junior staff member, and guilt or criticise the junior staffer for their work or behaviour.
8. Undermining work through the removal of responsibilities and constant change. Deliberately delaying and blocking an employee’s ability to progress a task by inexplicitly re-allocating or removing job responsibilities, constantly changing expectations or scope.
9. Pitting employees against each other. Bully bosses use this tactic to gain power and control by dividing and conquering. This tactic fosters the potential for unsafe workplace practices.
10. Setting impossible or changing work expectations. Placing impossible expectations and no support onto inexperienced junior staff.
11. Taking credit. Stealing credit for other people’s work and contributions without acknowledging them. Once employees identify this tactic they either leave or become less productive.

71% of workers in the UK do not feel completely safe in their buildings, according to study

How to protect workers from falls from height: In conversation with Corentin Barbieux

I’ve just chuckled and shuddered in equal measure whilst reading this article. A very incisive piece of writing from Dr Flis and disturbingly true.
The interesting thing was reading through the personality traits and recognising behaviours that we all exhibit on occasions, myself included.
At least self awareness is a step on the way to change. I hope.

I guess all of us have had the misfortune to misfortune to work with such an inept and clueless boss or supervisor at least once in their life. Great article!