Dr Tim Marsh PhD, MSc, CFIOSH, CPsychol, SFIIRSM is MD of Anker and Marsh. Visiting Professor at Plymouth University he is considered a world authority on the subject of behavioural safety, safety leadership and organisational culture. As well as many of the world's most recognisable industrial names Tim has worked with diverse organisations such as the European Space Agency, the BBC, Sky TV, the RNLI and the National Theatre in his 25 year plus consultancy career. He has key noted and chaired dozens of conferences around the world including the closing key note at the Campbell Institutes inaugural International Thoughts Leaders event in 2014. He has written several best-selling books including Affective Safety Management, Talking Safety, Total Safety Culture, the Definitive Guide to Behavioural Safety and Organised Wellbeing. Previously he led Manchester Universities ground-breaking research team into behavioural safety methodologies in the 1990s.
February 19, 2021

Tim Marsh takes a look at the David Omand book and applies some of its findings to health and safety. 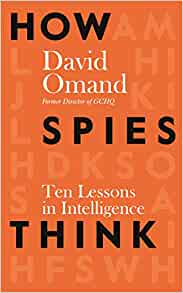 The former Director of GCHQ, David Omand, has written a fascinating book subtitled “10 lessons in intelligence”. In our ‘post truth’ world it’s a fascinating read, with his analytical and dispassionate description of what happened in the US election of 2016, particularly terrifying.

Essentially, Omand makes the case that ‘big tech’ knows more about us than we’ll even admit to ourselves – and that there are countless malign agents out there (political and commercial) that are queueing up to exploit that information. To part us from our money, to confuse us, to invert alternative realities with ‘deep fake’ technology, to influence world events or to just sew chaos. He coins the term WMCs “weapons of mass control”.

The basic model the book is based on is S.E.E.S – essentially situational awareness; explanation; estimation and strategic wariness about what the future holds. The book was written too early to address the January 6 storming of the Capitol, but you can clearly see how that might be applied to those events and their resonance. Indeed, one line from the book jumped out at me: “Populist politicians follow the crowd to see where they are going – then dart in front and shout ‘follow me’”.

It’s all good stuff but throughout the book, however, there are sections of direct relevance to the health & safety community though, primarily as it reinforces many principles we’ve been embracing more and more in recent years.

The Devil is in the Detail

Apparently, this in relation to Richard III at the battle of Bosworth. It’s hardly surprising that a spy would be strong on attention to detail and how noticing little things that can tell you a lot! We know that one misjudged comment at the national safety day from the CEO can undermine years of hard work and that critical incidents are key. When push comes to shove, the canteen will say “and they did / didn’t do; said / didn’t say X did they?!” in one of two entirely different ways … both of which will have a huge impact on the culture and hence behaviours – and hence the risk levels.

More than that though, we know that a strong safety culture is built one observation, one practical enhancement, one bit of facilitation and one quality dialogue at a time and that we tend to get the culture – and hence the incident rate – that our efforts deserve. (The Heinrich principle or the ‘grift’ principle in the world of wellbeing). The vital importance of diligence and hard graft is stressed and “always double check your calculations” is another principle Omand oft repeats.

In short, in the data gathering espionage, world, as in safety, it would appear that you get what you deserve – not what you wish for.

Omand doesn’t reference Freud but stories of denial, distortion, rationalisation and projection abound. As well as the Iraq war controversies the QAnon phenomenon and other conspiracy theories are explained rationally and dispassionately. A case study of a senior CIA figure who was duped by a double agent he was keen to believe, but who then overreacts is fascinating. It ends this side of the pond with MI6 investigating UK Prime Minister Harold Wilson as a Russian agent. When senior MI6 personnel report that ‘er … we checked carefully, and he isn’t’ the response “well they’re obviously in on it too! Just how far does this conspiracy stretch?!”

Ignorance. During the Challenger inquiry the head of safety at NASA declared that she thought everything was fine as there were no reports that things weren’t. The inquiry asked, ‘but we know that things go wrong every day… what did you do to find out what they were and if they were important?’ A now notorious silence followed and this an excellent illustration of a reactive safety culture. Attachment is of course holding on to an idea even when evidence contradicts this and is seen in a million and one ways but generically when management, addicted to a command-and- control mindset, still ask ‘but we pay them to do as they are instructed and we tell them how to be safe – why do we need to do more?” (Let’s walk around the site and talk about “safety as said” and “safety as done”).

Blame and anger of course can readily flow when something expensive and inconvenient then happens and we all know that blame is just toxic to a strong culture. (Just culture models showing that more often than not it’s the victim that is being blamed. (Worth stressing here that although most of us react badly to blame even when we’re bang to rights fair blame must apply. Failing to hold someone genuinely reckless to account is both symbolically and practically dangerous).

A couple of other principles in the book address the whole issue of self-fulfilling prophecies and about setting up virtuous not vicious circles. These principles are increasingly important as we take a more holistic approach to wellbeing and engagement. But the man’s a spy and not naïve so stresses:

For example, I won’t check your files every day to see if you engage and empower your workforce as well as you say you do – I want to build a strong relationship based on mutual trust. However, what I will do is just pop out every now and again and ask a couple of simple but important questions of the front line. Frankly, if the answers are encouraging the paperwork is irrelevant – and if the answers alarming then, again, the paperwork is irrelevant!

He addresses the politics of information flow and how desperately subjective and defensive people can be. His solution is to ask the right people the right question in the right way at the right time. We know in the world of safety, using ABC or temptation analysis, that asking people proactively what anonymous colleagues might be tempted to do tells us all we need to know. ‘No names, no pack drill’ as they say.

Stay calm and dispassionate. Try and build win: win relationships. Try not to make assumptions but since you will … get into the habit of checking them thoroughly. You may be thinking that there’s nothing here you wouldn’t find in books by Sidney Dekker, Matthew Syed (or the author for that matter) and you’d be right frankly! But it’s ever so reassuring that should the very clever people in charge of national security ever attend a good safety conference – they’d be sitting there nodding away! (Of-course they’d probably be at the back, in the shadows … before slipping quietly away unnoticed …).

Listen today!
What health and safety can learn from the book ‘How Spies Think’ Tim Marsh takes a look at the David Omand book and applies some of its findings to health and safety.
Tim Marsh
SHP - Health and Safety News, Legislation, PPE, CPD and Resources

Tim Marsh’s “What health and safety can learn from the book “How Spies Think” – Great and fascinating read…I’m off to get the book!

Thank you Maria – that’s very kind of you!

Tim You are an inspiration to me and the world of safety. Thanks for bringing this book to my attention.

Thank you Dave. That’s very kind of you too. Tim

I have bought the book and have just started reading it. I think it may change my way of thinking in some areas.