Heather Beach is Founder and Managing Director of The Healthy Work Company and has been running businesses in health and safety for over 20 years. Having run Barbour, SHP and Safety and Health Expo, she is now running her own business. The Healthy Work Company provides solutions which drive the wellbeing agenda to enable thriving in the workplace at all levels. Offering more than simply training, it delivers strategic support for your wellbeing programme. "We are driving the mental health agenda towards how human beings thrive in life – often through work, not in spite of it!" Heather can be reached on [email protected].
June 12, 2018

Luton Airport is arguably the most mature adoption of Safety Differently exemplified in the UK and Simon is passionate about the approach.

Here Simon talks to Heather Beach from The Healthy Work Company about why he believes it isn’t just safety which should be done “differently”.

Simon you’re an early proponent of safety differently but in spite of having adopted lots of its approaches, you don’t believe you can say you are a 100% “Safety Differently” until you have “Business Differently” What do you mean by that? 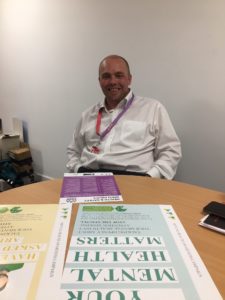 Simon Bown (SB): “I mean that for Safety Differently to be 100% embedded in the business I believe all departments  within the business need to be practicing the principles for safety differently – giving people autonomy, trusting your staff, listening to them, engaging with them. Let them tell you how to do their role. They are the experts.”

Why do you think the two are tied in so strongly?

(SB): “A lot of people talk about safety culture, I personally don’t feel you can sectionalise safety culture. Safety isn’t the absence of accidents it is meeting the business objectives successfully.  Everyone has a role to play – HR need to recruit the right people, procurement need to procure equipment of the correct quality. Operations need to be realistic around the goals they have to deliver. So many interrelating factors.

“If you look at the factors which relate to safety performance, which the safety team actually control, they are only a small percentage. You have to build a culture which means people make decisions for themselves within the right context – and safety can help create that which then creates a ‘Business culture’.”

Given that safety has been so siloed in the past, how does it put itself in the right place to influence business culture?

(SB): “You need to have and cultivate the right lines of influence. I am fortunate in that I report directly to the CEO and am also on the SMT. Safety people talk about culture an awful lot – they are seen as people who create culture and create strategy so why wouldn’t the safety person influence others to do things a bit differently? Seeing the way safety is done differently and seeing success you can then show the benefits of that approach.

What would your advice be for someone who isn’t in the fortunate position you are of working directly for the CEO?

(SB): “Take every opportunity to influence people in key positions. Share successes – don’t be shy.  Talk about what is working and engage people in operational positions too.”

Can you see other departments being influenced already?

(SB): “Yes – I do impart a lot of my knowledge of the concepts behind Safety Differently and they are showing interest in the restorative just culture model which I am starting to develop now.”

You have simplified your health and safety policy (see below) and made it consistent with Safety Differently. What has the response been?

(SB): “I have actually had internal emails from staff saying that they love the policy! People really get that it is very different – they have been very complimentary and I have had requests worldwide for copies. I was very careful not to launch it until some of the aspects mentioned were already up and running – so it doesn’t sound like conceptual management speak but people recognise it as real.”

What’s next for your implementation of Safety Differently?

(SB): “This year it is more focus on work as imagined vs work as done – really understanding what is written down against what we actually do. We have started to really build the trust – now we think we will start to see work as done. Our KPIs are now mostly against surveys and all positive – so we have no target for (lack of) accidents for example. They are recorded and investigated but this is not our measure.

“We are measuring such things as ‘Do you feel empowered to self manage risk at work as well as you do at home?’ 80% said yes. ‘Would you recommend friends and family to work at Luton from an H&S perspective?’ 84.81% said yes.

“Safety Differently isn’t an either/or with traditional safety – they can comfortably co-exist as they compliment each other, but it is a more engaging way to look at a subject which traditionally has been full of doom and gloom.” 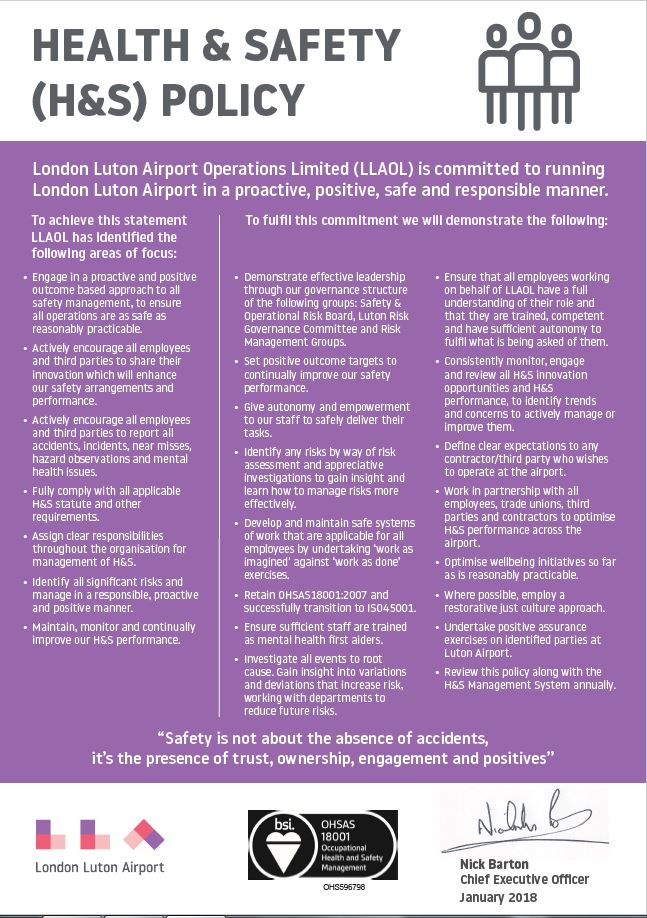 Download Barbour’s free director’s briefing
Safety differently to business differently? Simon Bown is Head of Health and Safety for London Luton Airport, arguably the most mature adoption of Safety Differently exemplified in the UK. Here Simon talks to Heather Beach from The Healthy Work Company about why he believes it isn’t just safety which should be done “differently”.
Heather Beach
SHP - Health and Safety News, Legislation, PPE, CPD and Resources