Work-related accidents and injuries cost the world approximately €2680 billion a year, according to new global estimates revealed at the XXI World Congress on Safety and Health at Work.

The findings were presented by the European Agency for Safety and Health at Work (EU-OSHA) and International Labour Organization (ILO). At this level, work-related injury and illness results in a loss of 3.9% of GDP across the globe.

It also discovered that the 28 countries making up the EU lost €476 billion to ill-health and injury in the workplace – around 3.3% of the GDP across the EU. 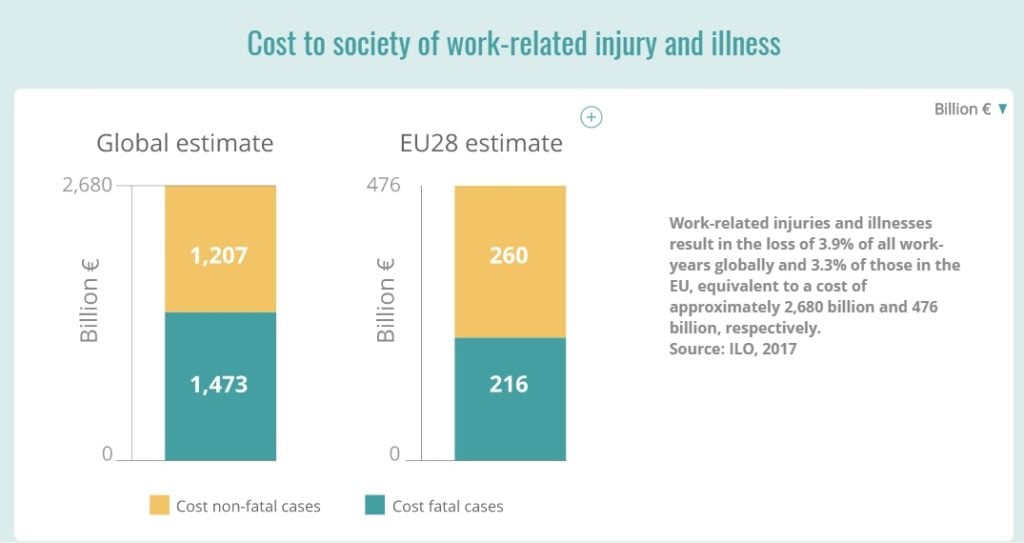 Speaking ahead of the World Congress, the director of EU-OSHA, Dr Christa Sedlatschek, said: ‘Safe and healthy work is a fundamental human right but these new estimates of the costs of poor or non-existent OSH measures show that the economic case for OSH has never been stronger.

“Work-related ill-health and injury is costing the European Union 3.3 % of its GDP. That’s €476 billion every year which could be saved with the right occupational safety and health strategies, policies and practices.’

Good practice in OSH can help make businesses productive, competitive and sustainable, as well as reducing healthcare costs and other societal burdens. But the costs of poor OSH are high — for individuals, business and society. Through the costs and benefits project, EU-OSHA has taken steps to identify and evaluate the data that is available in the EU and worldwide to develop accurate and up-to-date estimates of the costs of work-related diseases and injuries.

Further findings presented at the World Congress include:

A new data visualisation tool, developed by EU-OSHA as part of the project, was also unveiled at the World Congress.

It shows the global costs of work-related illnesses and accidents in an accessible way. Key results are presented as infographics, allowing researchers and policy-makers to explore the findings quickly and easily. With transparency and ease of use in mind, the visualisation tool also provides a glossary of frequently used terms, and a guide to the methods used.

EU-OSHA is one of the Congress’s supporting organisations and co-organising two symposia. One related to the costs and benefits project; the other examined evidence-based good OSH practice in micro and small enterprises, with reference to EU-OSHA’s work in this area and its OiRA (Online interactive Risk Assessment) project.

Conducting research – The importance of definitions and strategy

IOSH: Employers have ‘fundamental duty’ to ensure health and safety