Dr Tim Marsh PhD, MSc, CFIOSH, CPsychol, SFIIRSM is MD of Anker and Marsh. Visiting Professor at Plymouth University he is considered a world authority on the subject of behavioural safety, safety leadership and organisational culture. As well as many of the world's most recognisable industrial names Tim has worked with diverse organisations such as the European Space Agency, the BBC, Sky TV, the RNLI and the National Theatre in his 25 year plus consultancy career. He has key noted and chaired dozens of conferences around the world including the closing key note at the Campbell Institutes inaugural International Thoughts Leaders event in 2014. He has written several best-selling books including Affective Safety Management, Talking Safety, Total Safety Culture, the Definitive Guide to Behavioural Safety and Organised Wellbeing. Previously he led Manchester Universities ground-breaking research team into behavioural safety methodologies in the 1990s.
August 31, 2021

In the latest part of his SHP blog series, Tim Marsh describes how the ‘coupling’ concept can help organisations minimise the amount of knee jerk blame that can impact on a company’s culture.

Some academics can be a bit sniffy about Malcom Gladwell’s research, but he always writes a very interesting book. His latest, “Talking to Strangers” is no different and has great relevance for the world of health and safety, incident investigations and, in particular, the designing of layers of defence.

What the book discusses is that we are simply not anywhere near as good as reading people as we’d like to think we are and need to make huge efforts to be objective. Specifically, though we’re excellent at picking shifty people being dishonest and people with integrity being honest… when its honest people who look a bit shifty and shifty looking people who are being honest, research shows that it’s a 50:50 coin-toss!

Luckily, no employees who have the unfortunate luck to look shifty ever make genuine mistakes and no people who have the good luck to always look like ‘butter wouldn’t melt…’ ever con or cheat or deny wrongdoing with a straight face! In short, as often as not the heartfelt assertion that ‘you can just tell’ turns out to be… well total deluded b*****s.

As trainers we have lots of fun running workshops for clients where we walk them through basic and advanced techniques of incident data collection, collation and analysis – interspersed with examples of such psychology. However, this short article isn’t an attempt at marketing it’s to introduce the hugely important concept of “coupling”. Not the old sitcom with the great ‘perhaps …perhaps’ soundtrack and the dozy Welshman – funny as it was – but how a widespread understanding of the ‘coupling’ concept can help organisations minimise the amount of knee jerk blame that causes the resentment and erosion of trust that’s so toxic to a strong culture.

Gladwell’s ‘coupling’ is the notion that something catastrophic might happen if a certain person is in a certain place at a certain time. What some call ‘fate’. What’s important is that if that fateful opportunity is missed then the event may simply never happen at all. (Anyone familiar with Reason’s Cheese model of holes in layers of defence opening and closing and often never aligning will be familiar with this concept). An everyday example from the book, covers the regulations making it difficult to buy enough drugs to kill yourself in one or even two visits to a chemist. Instead of taking their life they instead get arrested screaming whilst attacking the window of a closed chemist in intense frustration, fall down drunk, whisky bottle from which they’ve been liberally swigging in hand or just come across someone kind… In short, this “new” thing “coupling” is just mainstream validation of what we all know in the safety world as ‘breaking the chain’. (But no need to be sniffy as mainstream validation always helps).

At this point it’s worth name checking Elvis and stressing Dekker’s work on the dangers of hindsight bias. (As in: “Yes, now we can see that they zigged when they should have zagged but before they acted both zigging and zagging looked equally valid). Elvis I’ll get back to.

Perhaps the key bit of psychology that’s relevant here is the notion of the ‘fundamental attribution error’ (FAE) which states that we are all prone to personalising error especially if it’s costly, painful or inconvenient. Unless, of course, the error is ours – in which case we tend to be fully aware of all environmental issues and throw in a few iffy excuses too.

For example, imagine you’re driving along in traffic when you’re tired, stressed, distracted by a hands-free argument on the phone and/or the fact that your sat nav is playing up. ‘Suddenly’ a car appears in that blind spot you’ve been meaning to do something about for months and you cause them to swerve. Your response is probably to take a deep breath, hold up a hand and say ‘ok… ok… sorry…’ thinking ‘take it easy, bit scary yes but no harm done… and certainly no need for that!’ as they gesture at you that they are really rather annoyed with what’s just happened… 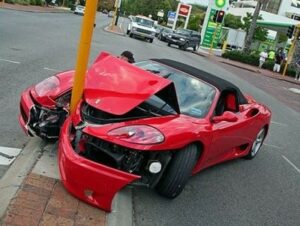 Now imagine you’re in the same car and someone nearly drives you off the road whilst overtaking you in a Ferrari talking on a hand-held phone. Then, minutes later, you come across the ‘perfect’ crash. The Ferrari is wrapped around a pole, clearly a right-off but the driver is standing next to it unharmed. Two questions:

Elvis is quoted as saying we should always walk a mile in a person’s shoes before we judge them. Most usually, this will take time and effort and the patient and systemic application of objective analysis techniques. We all think we’re astute and objective about others and their motives – but typically we’re just not – especially when they’ve inconvenienced us in some way. The best we can do is to learn some effective techniques like ‘curious why’ and refine and embed them through practice. Like almost everything else in life this requires years of hard work.

Before you abuse, criticise, and accuse walk a mile in my shoes”, Elvis Presley.

There is good news though. Using pro-active techniques such as the ‘pre-accident investigation’ or ‘temptation analysis’ (based on ABC) before there’s a need to find excuses for pain, inconvenience and expense are far easier to do well! Assuming we’re clever and insightful and everyone else stupid and wrong is lots of fun. It’s just not very useful.

As always, Tim manages to highlight the things that as humans we should all have worked out already; but somehow never actually got around to. Hence we’re the ones shouting and shaking our fists a other drivers!

Thank you Chris – but you might like to talk to the young man in the flash merc that just cut me up at a set of lights … I was assuming ‘arrogant’ and ‘couldnt be bothered to queue’ all over the place and at volume! (Though from his demeanor not necesarilly innacurately!)

Presley sang the track during his two seasons in Las Vegas in 1970.
Presley was quoted as saying ‘Don’t criticize what you don’t understand, son. You never walked in that man’s shoes.’

Thank you Neil – much appreciated. (Though I have to say ‘Instinct, Analysis and Joe South’ just doesn’t have the same ring to it. … He says having cast accuracy aside for the sake of a catchy sounding title!)