Group Health and Safety Manager, Joe Smith, tries to get to the bottom of why people do, or don’t, follow the rules and why it takes supervision or disciplinary action before some toe the line and work safely all of the time. 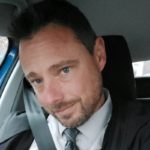 My greatest challenge (and perhaps every other practitioner’s challenge) is getting people to follow rules. I get there in the end using the full toolbox of coaching, instructing, cajoling, bribing, disciplining. Whatever is appropriate for that person. But I’ve always struggled to understand why some people require varying levels of pressure beyond training and instruction. Some people only need told once and that’s it. Why do others need disciplinary action or only do it when the supervisor is around?

After much thought over the years my best theory is this; humans are constantly making calculations. It’s how we arrive at decisions. It’s most often an automatic process. The safety practitioner though, because of their training, work their professional decisions out in a prescribed, conscious and formulaic way: 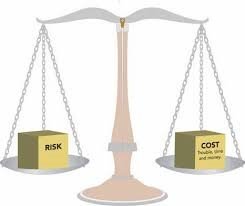 Reasonable Practicality Quantum of risk V the cost in terms of time, effort and money

Reasonably practicable, a concept we’re all well aware of. Beyond that we’ll also use our experience to say “y’know it might not seem so dangerous but I’ve had to report over seven day accidents due to something quite innocuous. I’ve also known people breaking an ankle on a little knot of wood on the floor”. So sometimes it might seem to the layman to be a little over zealous but quite often we might decide that it’s not worth the risk.

In contrast some employees have a very different calculation. Their calculation is: Perceived risk (adverse outcome) vs Making their day as easy as possible. So you have the “safety instruction” on one hand and “ease/convenience” on the other. The perceived risk calculation will depend on:

The ease/convenience will be calculated as below: It’s also more variable than the risk level and can change depending on:

If ease and convenience outweighs their perception of the risk then they are likely to opt for ignoring the instruction where they can get away with it. You might find people that you can generally rely on will cut corners too if the calculation swings towards a benefit for them.

So that’s one reason why it can be difficult to get people to work safely all the time. But it is rather simplistic. And some people may even be quite insulted by the implication that it boils down to “laziness”. I don’t think it is that simple either. The bigger issue within that calculation is the individual’s estimation of risk. The safety practitioner will calculate the level of risk by looking at both the likelihood AND severity of any potential accident. Many people seem to focus on likelihood, which may indeed be low.

You will be used to seeing the risk estimation chart below. It’s one method used to help in deciding appropriate control measures. It’s normally something like this but sometimes there’s 4 colour categories and people will score some areas differently. 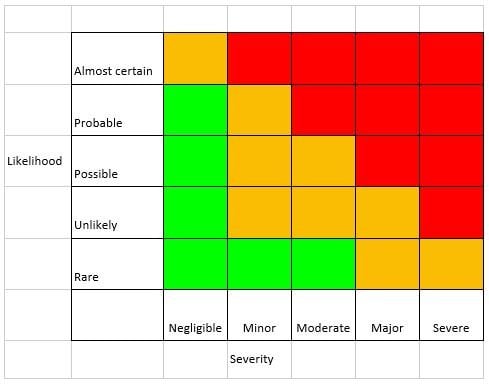 I find it particularly difficult to change behaviours when the task is one you would consider a low likelihood, high severity risk. If you use a hammer every day and every day you hit your thumb. It’s not a life changing injury but pretty quickly you’ll get tired of doing it. You’ll then find a way around it. Perhaps a holding tool, or you’ll make a conscious effort to remember to keep your hand away from where you strike the hammer. If a person sees the adverse result pretty quickly then they’ll adjust their practices. Even with low severity outcomes.

In contrast if you drive a forklift with a load raised so that you can see better. Despite being told it’s wrong in your training and site SSOW, if it helps you to more quickly navigate through the yard you might do it. You may then go on to do it dozens, hundreds, thousands of times without hurting anyone. You may even have dropped the load once and smashed it. But for it to be a life changing incident you have to firstly lose the load which is a rare occurrence, and secondly there needs to be someone there in that exact place in the entire yard where you’ve just dropped that load. The statistical chance is quite low. A person is highly likely to go an entire career without injuring anyone in spite of the unsafe practice. In fact the vast majority of people DO go through their entire careers without being involved in a serious accident. This is in spite of them often having many unsafe behaviours. So people on some level make that computation and decide that the risk is so minimal that they’re prepared to take the chance. That serious accident has a low likelihood but high severity.

So where the likelihood is very low I can at least understand people’s thought process even if I don’t like it. But then behaviours can be frustratingly difficult to change even when you’re looking at high likelihood and high severity tasks. For example working on sub-standard scaffolding or HGV drivers that insist on strapping up and working around forklift trucks whilst they are loading. This regularly ends in fatal accidents. The driver is prioritising speed of getting set off over safety. And the forklift driver is prioritising avoiding some minor conflict by not telling the driver to go wait in their cab as per the site rules.

Anything less than an immediate adverse outcome and many people are prepared to take a chance. I think there’s two reasons for this:

Fundamentally I think that people view risk very differently to those who are trying to manage safety. For the layman I’d suggest that the table below more accurately assigns their risk rating of tasks. 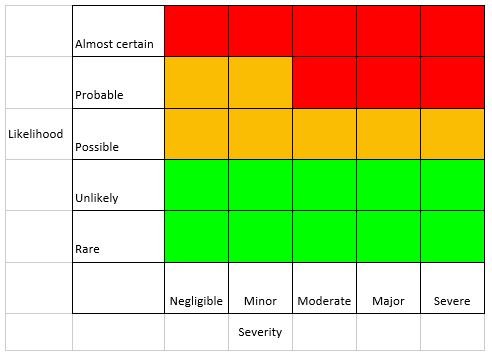 It’s only when the outcome is probable, or almost certain that people take notice.

So if this is the case then it’s the high severity that we need to focus these people’s minds on. To make people understand that it is just not worth gambling when the stakes are so high. And to make them understand that the scales between effort and convenience don’t tip so easily towards convenience if you add the weight of severity into them.

Download Barbour’s free director’s briefing
Human behaviour: Rule following and risk perception Group Health and Safety Manager, Joe Smith, tries to get to the bottom of why people do, or don’t, follow the rules and why it takes supervision or disciplinary action before some toe the line and work safely all of the time.
Safety & Health Practitioner
SHP - Health and Safety News, Legislation, PPE, CPD and Resources

This is a really important discussion. Interestingly, modern neuroscience suggests that the vast majority of the decisions we make every day are far from conscious. ” Contrary to what most of us would like to believe, decision-making may be a process handled to a large extent by unconscious mental activity”. It therefore seems unlikely that employees are often weighing up the factors discussed in this article. If we accept this then a better approach is to take away decision making as much as possible by the use of physical systems (interlocks etc) to make taking a bad decision much more… Read more »

Yeah but, no but, regardless of all being members of the “Self-Preservation Society” with legal obligations that come with Health & Safety sometimes we do need legislation averse goodwill hunting “nudge campaigns” as, presenteeism and carrying-on regardless of self-harming not limited to employees counting on a bottom-up campaign but, really, really needs as top-down ethos and I don’t mean a cascade of stuff with or without a ‘fan’.