Dr Tim Marsh PhD, MSc, CFIOSH, CPsychol, SFIIRSM is MD of Anker and Marsh. Visiting Professor at Plymouth University he is considered a world authority on the subject of behavioural safety, safety leadership and organisational culture. As well as many of the world's most recognisable industrial names Tim has worked with diverse organisations such as the European Space Agency, the BBC, Sky TV, the RNLI and the National Theatre in his 25 year plus consultancy career. He has key noted and chaired dozens of conferences around the world including the closing key note at the Campbell Institutes inaugural International Thoughts Leaders event in 2014. He has written several best-selling books including Affective Safety Management, Talking Safety, Total Safety Culture, the Definitive Guide to Behavioural Safety and Organised Wellbeing. Previously he led Manchester Universities ground-breaking research team into behavioural safety methodologies in the 1990s.
July 30, 2021

‘How much film you got in that bloody camera?’ 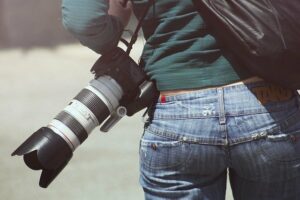 In recent weeks I’ve been able to actually visit client sites again to talk to employees about their work in situ. Recently, as we ‘re-emerge’ I had a great reminder of something so many of us preach at conferences and in board room …

Flouncing about with cameras in our brand-new PPE at a flood defence site, we approached a group of eight workers who, understandably, wondered what on earth we were up to. (Or, at least, were thinking something that broadly meant that!). We explained about the film we were making and asked would they consent to helping us out with some ‘establishing’ shots. (To add colour to the voice over). So, I got to talk about the European Championship football with them – which made the conversation look animated at least!

We then ran a genuine toolbox talk about the topic of the film (the vital importance of good quality health and safety conversations). As ever, one or two at the front had lots of interesting things to say about the way the job had been organised. Specifically, how they had to drive for four hours a day to do a job that wasn’t their speciality. This, they found especially frustrating as a local job ‘right up our street’ had gone to a contractor. (Presumably because it was cheaper… well the headline figures at least).

Regardless of the overall pounds and pence figures, once soft costs included, morale was clearly low. Indeed, one of the team was at the end of their notice period as they’d resigned some weeks earlier. It was obvious that these guys were a really tight knit group and his mates clearly didn’t want him to go but (more than) understood. He really didn’t want to go either, but as the youngest by some distance found his social life severely compromised by an alarm set for 5am every day.

So, I stepped back and the visiting management and the team had a fascinating chat about the realities of working for the company. 101 really sensible suggestions were made, noted and sincere ‘we’ll look into that and get back to you next week at the latest’ promises made. Then I joined in by challenging one chap with: ‘hey, the experienced looking one at the back there with the wry smile on his face. What do you think about all this? Anything you can add to what your mates have said?’ His, I thought both priceless and illustrative response:

How much film you got in that bloody camera…”.

As the Safety Differently movement puts it, the workers are seldom the cause of any problems but very often they have the solutions…

Listen today!
‘How much film you got in that bloody camera?’ In the latest part of his SHP blog series, Tim Marsh describes a simple ‘Safety Differently’ case study…
Tim Marsh
SHP - Health and Safety News, Legislation, PPE, CPD and Resources

Therein lies the gap between them and us, couldn’t organise a p’up in a brewery….all MBA with a pencil and piece of paper and no clue, suffered that years ago in the RAF when they started having direct entrants from University and they couldn’t make a brew for the lad’s way back then, and still probably taking their washing home at weekends for Mum, maybe now in the 21st Century still living at home ? Don’t be so arrogant and ignorant that you are to scared to like, you know, Tim get out and actually talk to your hooman resources.

Too much pussy footing around the lack of genuine meaningful and purposeful interpersonal communications in the 21st Century of Digital texting of short missives and/or e-mail instructions, so easily misconstrued, witness the street fights between girls on our sink estates due to misunderstanding of context of texts and social media cryptic comments – hahah

An interesting piece about information, how two parties don’t communicate with each other, on the one side the employee sees being sent 4 hours to do a job he’s not familiar with, when a contractor does a job closer to his home he is. The employer has not told him why. Employee Issues 1 asked to do a Job that they didn’t specialise in, 2 travel time to work, 3 fatigue, 4 someone else doing the workcheaper. Employer Issues 1 getting men skilled at alternative work, 2 Provision of vehicles 3 shorter working day 4 less skilled work of short… Read more »

Thank you for such a thoughtful response Gary.