Dr Tim Marsh PhD, MSc, CFIOSH, CPsychol, SFIIRSM is MD of Anker and Marsh. Visiting Professor at Plymouth University he is considered a world authority on the subject of behavioural safety, safety leadership and organisational culture. As well as many of the world's most recognisable industrial names Tim has worked with diverse organisations such as the European Space Agency, the BBC, Sky TV, the RNLI and the National Theatre in his 25 year plus consultancy career. He has key noted and chaired dozens of conferences around the world including the closing key note at the Campbell Institutes inaugural International Thoughts Leaders event in 2014. He has written several best-selling books including Affective Safety Management, Talking Safety, Total Safety Culture, the Definitive Guide to Behavioural Safety and Organised Wellbeing. Previously he led Manchester Universities ground-breaking research team into behavioural safety methodologies in the 1990s.
December 17, 2021

Tim Marsh discusses the importance of asking ‘How are you?’ twice… and some simple pro-active, culture creation techniques – as, in Europe, the initial response ‘I’m fine thank you’ is required by law…

Asking How Are You? Twice. 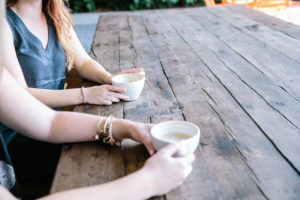 More and more companies are embracing the truth of these messages and the ‘emerging from COVID’, opportunities to create a stronger and more resilient workforce are being embraced by many. Although some are, of course, just adopting a tick box ‘train up some mental health first aiders then forget about it’ approach, others are attempting something more impactful and holistic. Unfortunately, there’s a contextual difficulty for all…

In most of the UK and Europe (and certainly, from where I come from in South Wales) we had it drummed into us at an early age that there’s only one answer to the question “how are you?” and that’s “I’m fine thank you – how are you?’. Any other response and the person you’re talking to can call the police. It’s a law. It’s a bit like when a European gets into a lift in America and others start talking to you… instinctively we’re overcome with horror, bewilderment and panic.

It’ll take a few generations to change this so in the meantime a decent technique is to remember the ‘law’ and simply return to the question some minutes later – following a decent discussion about work or life in general. Basically, when some rapport has been developed, there’s a far higher likelihood that a more personal and open response will be given.

How to talk about wellbeing at a Tool Box Talk for people who don’t like to talk about themselves… and especially their feelings.

All things equal, ‘struggling’ people are more likely to have incidents than people who aren’t. They tend to be more fatalistic, so are less likely to do the day-to-day ground-work to get the ‘luck they deserve’ they tend to be more distracted, so show less situational awareness and they are more likely to create risk around them with poor quality decisions and interactions. (This absolutely is not to point a finger at any individual but rather to point at a systemic risk factor that needs pro-active managing like any other).  Now, we can ask ‘anyone here feeling fatalistic, distracted or angry?’ but we’re unlikely to get much of a response.

Some of our clients have started showing a sexy looking graph titled the “fatalism and intolerance of individual, societal and organisational stressors index”. Bemusement fades as they explain “or the “F.I.” index for short!” Our experience is that a tool box talk containing the question “if any of you buggers have a high F.I. score today… have a word please” gets a far better response than any formal request.

However, we know that pro-active techniques are always preferable to reactive ones so the next section suggests some day-to -day habits all employees can adopt. These are aimed not at people who have begun to struggle but to develop general organisational resilience as organisations strive to give employees the benefits of ‘good work is good for you’. (People who enjoy their work tending to be mentally healthier than people who don’t need to work at all).

Writers and social scientists like Paul Zak and Peter Warr suggest the following good habits that leaders can adopt to empower those around them. They also increase levels of trust in the organisation which many consider the single most important metric of them all.

1 Use Praise. Held to be around 20 times as effective as criticism in changing behaviour so as Ken Blanchard’s ‘One Minute Manager’ stressed – get out there and “catch” a person doing something right / safe / healthy / creative / supportive…

2 Set Hard but Realistic ‘SMART’ Goals. Goals that are specific, measurable, agreed, realistic and time-set tend to deliver optimum engagement and performance and job satisfaction. I’ve highlighted agreed as, for me, it’s utterly vital for delivering the many and varied benefits of genuine volition and the following famous graph illustrates it clearly… 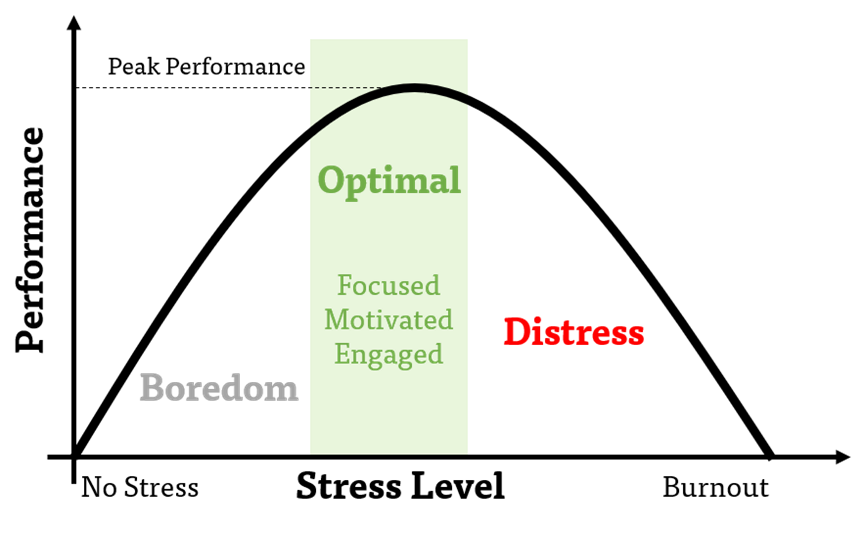 Another way of phrasing this relates to what is known as ‘flow’. Is time passing quickly because you’re in the ‘zone’ – or is passing slowly because work is purgatory?

3 Maximise Discretion, Flexibility (and Autonomy). Almost everyone agrees with the following: “I am an adult. I have been an adult for many years now and find micromanagement hugely frustrating and annoying… so within agreed parameters of responsibility and accountability give me the discretion to do what we’ve just agreed I need to do in my own way. Thank you. Now back off…

(Note that this is where individual tailoring is especially required. Some people require almost unlimited autonomy and can only really function as self-employed. Others, given that level of autonomy, would never sleep at night. Best to check!)

4 Communicate for Traction. No one wants to feel like a hamster in a wheel or a cog in a machine so let people know what’s happening and why best you can. You do not want colleagues to feel exactly as we all do at an airport or train station when we’re told nothing but ‘your flight is delayed…’. Better to say: “We simply don’t know at this time when it will depart but it’ll be at least an hour though we hope to know in 30 minutes how long it will be. So, I’ll update you in 30 minutes even if it’s to say we still don’t know…”.

5 Model and Facilitate Good Quality Personal Interaction. We know that everyone is leading by example all day every day so it’s best to do it well. This of course applies equally to all interpersonal interactions so doesn’t need expanding. However, as well as modelling interactions – starting with a ‘lived experience talk’ from the CEO perhaps – facilitating opportunities for people to talk is also key. Training supervisors that tool box talks need to contain minimum box ticking and a high degree of dialogue…

6 Encourage and Facilitate Personal Growth. We are all of us aware that life isn’t a rehearsal and that any chance to do ‘better next time’ isn’t necessarily guaranteed. We nearly all want to excel and make the most of life – and generally not just as an employee.

I’ll never forget the supervisor who sought me out to tell me a simple two day ‘soft skills’ course some months before had gotten him a promotion but changed his life. “First weekend home my son asked me ‘what have you done with my old man? Where’s he *&^*ing gone?’ then he burst into tears, hugged me and called me dad for the first time in years”.

It’s great that his company thought him worthy of promotion but that’s not what still gives me a warm glow 20 years later. 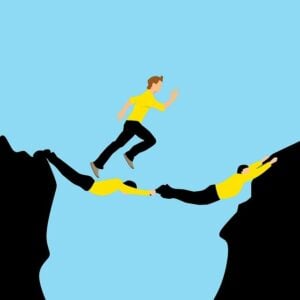 7 Be Humble (build trust). Being humble and showing humility isn’t about deference. As the saying goes it’s not thinking less of yourself – it’s thinking about others more. Patrick Leoncini’s multi-million selling book about excellent leaders and team players and Sam Walker’s book on the best team captains in sports history (“Captain Class”) both have this what’s best for the team ‘humility’ front and centre. Perhaps even more importantly, studies show that saying ‘I don’t know’ or asking for help are just about the fastest way to build trust in others and many experts say that level of trust levels is the best predictor of organisational success there is.

Zak’s list omits the (for me) utterly essential ‘learn from the experts not just for the ideas but to show you think they’re adults…’ but it fits in here perfectly.

To be fair, experience and recent history show that you can get famous and powerful despite having a big fat self-obsessed ego… but it’s rarely sustainable you certainly won’t ever find your biography easy reading! People are infinitely complex and frequently fragile but often in very predictable ways and there are many powerful techniques that organisations can use to help to help people not just survive but flourish. Many organisations currently underuse these badly. As Maya Angelou put it “it’s not about surviving, it’s about thriving with passion, compassion, humour and style”.

In these days when staff retention is key it’s also worth recalling this Angelou quote. “People may forget what you say, they may forget what you did – but they never forget how you made them feel’. Take your pick between the classic Nina Simone and James Brown songs here. They both work for me!