A principal contractor has been sentenced after he was found to have supervised unsafe excavation work at a site in Denton, which put workers in danger and rendered the neighbouring property unstable. 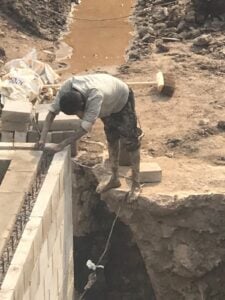 Manchester Magistrates’ Court heard how between 2019 and 2020 Mustapha Matib had employed several groundworkers to excavate land at Gibraltar Lane, Denton in preparation for the construction of a family home. An inspection was carried out at the site in August 2020 after neighbours raised significant concerns, work was stopped when serious fall risks and potential collapse were identified.

The HSE’s investigation found that as principal contractor Mr Matib had failed to prepare a construction phase plan, with risk assessments and method statements detailing how the work would be safely carried out. He also failed to appoint a site manager with suitable skills, knowledge and experience to plan, manage and monitor the work; and ensure the health, safety, and welfare of those carrying out the work or others who may be affected by their actions.

Inspectors also identified a large, deep and unprotected excavation, which gave rise to a foreseeable fall risk. In addition, excavations were not shored or suitably battered back to prevent the risk of collapse. Personal protective equipment had not been provided and some workers were working barefoot on site. The site was not adequately secured to prevent unauthorised persons from entering and a neighbouring property had been undermined with parts of the property at risk of collapse due to the excavation work.

Mustapha Matib of Allerton Road, Bradford pleaded guilty to breaching Regulations 2(1) and 3(1) of the Health & Safety at Work etc. Act 1974. He was sentenced to sixteen weeks imprisonment suspended for twelve months, ordered to carry out 200 hours unpaid work and pay costs of £5,673.

Speaking after the hearing, HSE Inspector Phil Redman said: “Inspectors will not hesitate to take appropriate enforcement action against dutyholders who fall below the required standards and put lives at risk.”

I’ts never a good thing to compromise Safety. I think duty holders should learn from this event.

2020, Manchester, bare foot workers in that environment results in a suspended sentence with £6,000 costs. What are we doing wrong?

This is shocking. What is even more shocking is the fine……or lack of it! All those breaches and the actual fine is 16 weeks prison suspended for 12 months (so not going to jail), 200 hrs of community service (really?? That wont be a deterrent) and costs of £5,673 (he saved more than that by cutting the corners he has!). I cannot see this as a victory for the HSE, it is a kick in the proverbial to all H&S professionals and potentially to insurers. It sets a very bad precedence for the future, he did a Risk Assessment alright,… Read more »

Unless corporate manslaughter charges are used against these companies, inc where that poses a risk. They’ll continue to ignore safety paltry fines are useless. With cuts in HSE budgets you’d never see an inspector unless someone struggles to get in touch, which takes forever.

Hi Pete, totally agree. All the hard work and effort that has and still goes in to making a workplace as safe as it can be is just totally diluted by such a paltry fine. It is obvious that by cutting corners like this saves time and money, he would have easily saved more than £5,673. And 200 hours community service, I cant see that being a big financial effort just an annoyance. If you get caught speeding you can go on a speed awareness course, depending on how the course is given (positive and interactive instead of dull and… Read more »

There is a H&S awareness course for the industry, it’s called SSSTS or SMSTS costs a few hundred quid, but Bodgit and Nash, Rip-off and Scarper, Norfolk ‘n Good and Weir Havingalaff Builders won’t invest in that. These fly by nights should be closed down forever, banned from the industry for good with extremely severe penalties for breaching, life changing penalties! This would give the honest, hardworking and compliant builders the opportunity to compete fairly in the marketplace. The client should be brought to account for employing them! I’m all in favour of a scheme that insists that building work… Read more »

I also find the punishment of 200 hours unpaid work and costs of £5,673 astonishing, This site was clearly a CDM catastrophe and to add to that the guy was working barefoot – yes barefoot!!!. This ridiculously lenient sentence needs to be addressed, it seriously undermines everything we are trying to achieve and provides absolutely no deterrent whatsoever. Like a previous commenter I too am very angry – this pathetic sentence is an insult, not least to his employees who deserved better.