Jamie Hailstone is a freelance journalist and author, who has also contributed to numerous national business titles including Utility Week, the Municipal Journal, Environment Journal and consumer titles such as Classic Rock.
March 27, 2019

Construction workers’ desire for a sun tan in the summer could be putting them at increased risk of developing skin cancer, according to new research. 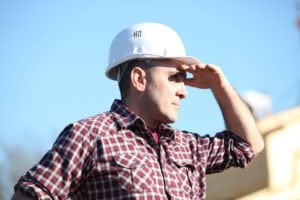 A new study funded by IOSH and led by researchers from Heriot-Watt University and the Institute of Occupational Medicine in Edinburgh measured UV exposure amongst construction workers in the UK and looked at how they could be ‘nudged’ through their smartphones to reduce the risk of skin cancer.

Builders on nine sites across Central Scotland and Greater London took part in the trial,

Messages were sent to their smartphones to encourage them to reduce exposure to UV radiation in the summer, and to increase their intake in vitamin D in the winter to make up for the lack of sun.

During the trial, the workers were issued with UV wearable sensors, which were mounted on the back of their hard hats.

The sensors measured the standard erythema dose (SED), which the workers were exposed to while working outdoors.

The International Commission on Non-ionising Radiation recommends a limit on daily exposures for a person with light coloured skin to 0.3 SED per day; above 2 SED in a day they are at risk of getting sunburn.

Around 40% of those who worked outdoors had daily exposures, which exceeded 2 SED while about 12% of the exposures for the indoor workers were above 2 SED.

In SHP’s recent Safety Innovation series, we looked at how wearable technology is being used to ‘nudge’ the wearer, making them aware of any potential risk or hazard.

The study also found almost half of outdoor workers on construction sites had insufficient vitamin D during the winter.

“In Britain we love the sun and having a sun tan, but unprotected exposure to the summer sun can cause irreversible damage to our skin and ultimately may lead to a diagnosis of skin cancer,” said Principal Investigator on the research from Heriot-Watt University, Professor John Cherrie.

“Every year there are more than 3,000 cases of skin cancer caused by outdoor work in construction and other industries. Our desire for a tan is stopping us from taking proper care to protect our skin from the damaging effects of the UV radiation in sunlight.”

OSH research manager at the Institution of Occupational Safety and Health, Mary Ogungbeje, added: “We have known that behaviour change strategies specifically targeting health risk factors can be effective. What we didn’t know is how effective the use of everyday technology can be in encouraging safe, healthy attitudes and behaviour among outdoor workers. The findings are promising but highlight that there’s some work to do as both workers and employers have a part to play in reducing the risks of excessive UV exposure.

“We encourage workers and employers to be more aware of occupational cancer and take positive steps to reduce the risks.”

Earlier this month, British Safety Council and King’s College London launched the ‘Canairy’ app for outdoor workers to measure their exposure to air pollution in London.