Four people are confirmed to have died and three people have been injured as a consequence of a construction crane that collapsed in Seattle, US on 28 April. 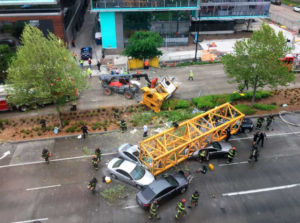 Harsh weather conditions was reportedly the cause of the crane collapsing, with strong winds causing the crane to snap in half.

Witnesses say that half of the crane was “flying down the side of the building” whilst the other half fell down to the street. Which instantly became a hazard to all pedestrians in the area.

Two employees, that were on the crane working on the new Google Seattle campus, were killed along with two pedestrians, one of them a University student that was in a car that was crushed. All four died before firefighters got to the scene.

Four companies are under investigation over the incident.

Improve your safety while working at height

Working at height is fraught with dangers. In Great Britain in 2016/17, there were 25 fatalities attributed to falls from height, with more than half of those occurring in the construction industry.

Download Barbour's "Guide to Working at Height" eBook and find out about:

Download this eBook today to ensure your strategy for working at height is effective and compliant.