Two bodies have been recovered in explosion at SSI site

Two men have died in an explosion at a former steelworks site in South Bank. 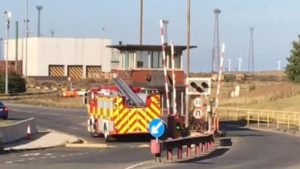 Fire crews were called to the old coke ovens at the SSI site in South Bank, Middlesbrough, at 2:15pm on 19 September.

Cleveland Police confirmed that two workers were killed in a ‘huge’ explosion.

The bodies were recovered and their families have been receiving professional support and help from Cleveland Police.

Incident Commander, Detective Superintendent of Cleveland Police Tariq Ali said: “Being able to return the men to their families has been at the forefront of everyone’s minds and I would like to thank colleagues for their professionalism in these difficult circumstances.”

The two workers were working at height inside a cherry picker, working near a gas holder when the explosion happened.

The site was evacuated, and firefighters stayed overnight at the scene, to continually monitor the site. The bodies of the victims have yet to be recovered as work continues to make the site totally safe.

Cleveland Police also reported that: “There’s been noise and a plume released at the former SSI site just after 2am today. This was expected and planned for -and may happen again. Emergency services remain on site, monitoring and responding accordingly. Thank you to local residents/businesses for your understanding”.

Tees Valley Mayor, Ben Houchen said: “We will examine every single detail of the work that was being conducted. We will make sure we do everything to understand exactly what happened.

The HSE has been informed and all work on the site has been suspended.

Two bodies have been recovered in explosion at SSI site Fire crews were called to the old coke ovens at the SSI site in South Bank, after an explosion was reported.
Samah Ahmed
SHP - Health and Safety News, Legislation, PPE, CPD and Resources