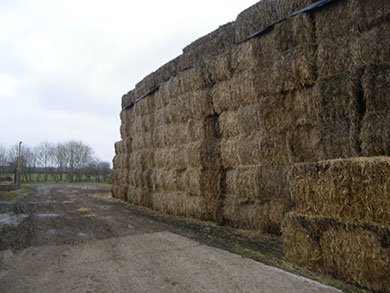 A part-time farm worker was left permanently disabled after being crushed by two straw bales that fell on him as he tried to remove them from a seven-metre stack at a farm in North Yorkshire. At the time of the incident the 40-year-old worker, who is now 40 per cent disabled and unable to return to work, was working alone and in the dark at the end of the day.
Paul Teale, from Easingwold who is married with a teenage son, sustained serious injuries to his spine, four broken ribs, a torn tendon in his right calf, lacerations and other crush injuries. He needed to have a spinal cage inserted and has had to undergo several operations. He subsequently suffered a series of minor heart attacks, following the incident at Pilmoor Grange Farm, north west of York, on 26 November 2012.
As Mr Teale was working alone he had to drag himself yards across the farm to get reception on his mobile phone so he could summon help.
Speaking of the impact the incident has had on his life, Mr Teale said: “I do not have a life anymore, it is just an existence.”
Driffield-based Pockmor Ltd, which operates the pig farming business at the rented Pilmoor Grange site, was last week (14 February) sentenced at York Crown Court for serious safety failings in a prosecution brought by HSE.
York Crown Court was told that Mr Teale, who also worked as a bricklayer, had been working a late afternoon and early evening shift. One of his regular jobs was to replace the straw bedding in the pig sheds and he used a loader vehicle to transport the bales, sometimes having to extract them from a stack that was seven bales high.
On the evening of the incident he used the loader, which had no working headlights, to lift a bale at the fourth row, tilting the load so that the two bales above would fall backwards onto the stack. However, the two bales toppled forward, bounced down the arm of the loader and hit Mr Teale one after the other. The loader itself had no protective cage against falling objects.
HSE found the system of work used by Mr Teale and others for lifting bales down with the loader was inherently unsafe. The investigation identified that he had not been appropriately trained to use the loader or effectively instructed in a safe system of work. Rather he had adopted flawed existing practices from observing colleagues, who were equally insufficiently trained.
Pockmor Ltd of Pockthorpe Hall, Pockthorpe, Driffield, East Yorkshire, was fined £16,000 and ordered to pay £4,500 in costs after pleading guilty at an earlier hearing to breaching section 2(1) of the Health and Safety at Work etc Act 1974.
In a victim impact statement, Mr Teale said: “Physically, the accident has totally destroyed me. I am currently the best I will ever be and the doctors have said I could still be paralysed at any time in my life by any kind of impact injury. I am in pain 24/7 and will be on painkillers for the rest of my life.”
After the case, HSE Inspector Geoff Fletcher, said: “This was a preventable incident that has had a permanent life-changing impact on a previously fit and hard-working man, with the consequent devastating effects on his wife, son and wider family.
“Agriculture has the second highest rate of deaths of all sectors — only construction is higher — and there were 29 fatalities in the country in 2012/13.  Pockmor Ltd had not properly assessed the risks involved in moving straw bales or put in place a robust system of work to do so. It also failed in its duties to ensure their farm workers were adequately trained to use the machinery and instructed in a safe method of carrying out this task.”