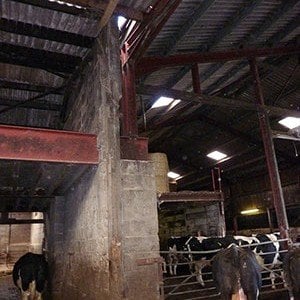 A worker suffered life-changing injuries, including a fractured skull and broken collar bone, when he plunged nearly seven metres through an unsafe roof light while installing solar power racking, it has been heard at Bradford Magistrates’ Court. The highest possible fine of £20,000 was imposed on the company who ‘totally neglected safety measures’.

54-year-old Peter Bettison, from Crossgates, sustained multiple injuries and needed to be under sedation for most of the 22 days he had to spend in hospital.

As well as a his fractured skull and broken collar bone, he suffered a head wound needing 13 staples,  a punctured lung, broken ribs along his left side, a fracture to his left hand, a broken left pelvis and chipped bones in his spine and hip. Mr Bettison returned to work eight months later but in a different role.

The fall through the rooflight, which lacked any protection, led to Mr Bettison’s employer, Duncan Plumbing, Heating and Electrics Ltd, being prosecuted by HSE for serious safety failings.

Bradford Magistrates heard on 3 June that Mr Bettison and another employee were installing the solar panel racks on a farm building roof in Ilkley on 28 November 2011.

Several had been successfully put in place, but after securing one further rack Mr Bettison stood up and unwittingly stepped on one of the roof lights. It instantly gave way, sending him crashing nearly seven metres to the concrete floor below.

The HSE investigation found that Duncan Plumbing, Heating and Electrics Ltd had carried out two site surveys in advance of the work, identified the presence of roof lights, and had loaded the information in their computer system for the design team. However, the firm then failed to take any action to protect either the workers from falls or the roof lights themselves.

HSE said a sign on the side of the barn warning of a fragile roof was also apparently disregarded.

Duncan Plumbing, Heating and Electrics Ltd., of Rudgate Business Park, Tockwith, York, was fined the maximum magistrates were able to impose — £20,000 — and ordered to pay £3,408 after pleading guilty to a breach of the Health and Safety at Work etc Act 1974.

After the case, HSE inspector Sarah Lee, said: “Mr Bettison suffered devastating injuries in this fall and could so easily have been killed. His fall may have been broken by hitting the hay bales and, if so they probably saved his life.

“The overall system of work employed by Duncan Heating, Plumbing and Electrics Ltd was inherently unsafe. They did not recognise or properly identify the dangers faced by their employees so safety measures were totally neglected.

“It is astonishing that the company, having got the information about roof lights at their fingertips, subsequently failed to do anything about it. Had they been protected from above or netted from below, this incident could have been avoided.

“Falling from height is still the biggest killer in the construction industry and also leads to many injuries. The risks are also well-known in the trade so there is no excuse for putting workers at unnecessary risk.”

Mr Bettison, a father of two and a grandfather to five, said: “I can no longer drive long distances. I can manage about an hour before I start to ache in my left shoulder and pelvis. I still get dizzy sometimes when I lie down which is a result of the accident.

“I just don’t have the strength that I used to have and this has stopped me doing a lot of things such as DIY. As a family, we don’t go for walks as much as we used to as I just get tired too quickly. The impact of the fall has been felt not just by me, but by all my family.”

How do TMVs maintain a safe water supply?

“Falling from height is still the biggest killer in the construction industry and also leads to many injuries. The risks are also well-known in the trade so there is no excuse for putting workers at unnecessary risk.”

If this statement is correct? why is it not possible for each resulting injury or near miss not to result in the same level of penalty?

We may then see improvement, and if a few were put behind bars who knows what the extent of improvement accross the boar