‘It will never happen to me’: A harrowing insight into workplace death

Matthew Hazelton told Safety & Health Expo about his personal journey following a workplace incident where two of his brothers and two other colleagues died. 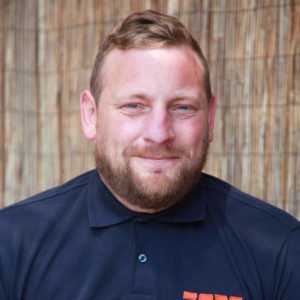 Hazelton, who won the SHP Biggest Impact Award in 2017 and was speaking on behalf of Proud2bSafe, told the audience that the workplace deaths of his two brothers and two close friends left him “having to deal with things you don’t think you will ever have to deal with”, and how he struggled with the attention of the media and funeral organisations.

Hazleton was one of the directors of groundworks firm Hazegood, when the four friends were killed at a site in Great Yarmouth in January 2011. Hazleton spoke of the day of the incident, the immediate impact of the personal loss and the longer-term implications, as investigations and inquests into the incident lasted for over six and a half years.

To begin with Hazleton had to balance the unspeakable personal loss with relentless press intrusion. The day after the incident he had to chase rabid national newspapers off his mother’s property. “This wasn’t something that happened for a day, it went on day after day after day.” When he tried to phone the police they told him the press were a “lawless society”.

The legal process also meant that he couldn’t speak to his work colleagues and friends as they weren’t allowed the same barrister or solicitor and “when you really want to be close to your mates, you are being dragged apart”.

It took three years before an inquest – “a rollercoaster of emotions” – returned a verdict of accidental death, and it was not until last May, six and a half years later, that the site owner and principal contractor were both fined a total of £700,000 for health and safety breaches. Throughout the process, Hazleton refused to change the name of the company or fold as he felt it would be an admission of guilt.

This meant that the company, which had previously been doing well, began to struggle to get new business and support the close-knit workforce that relied on the work to fulfil their mortgages and provide for their families, something that added additional strain on Hazelton.

Hazleton explained how following the accident and inquest, his love of construction and his work vanished, but much greater personal and social impacts followed.

“Everything went back to anger. If my peas were cold I got angry about it. My kids were dreading seeing my van pull up outside because they knew what kind of mood I would be in.” He said that throughout the aftermath his wife had been his rock, but that without noticing he had been “mentally battering her into submission… to the point where she said she couldn’t do it anymore.”

His loneliness at “going from a three-strong brotherhood to just me. A three-man directorship to just me” led him to drink and drugs and while driving one day near the anniversary of the incident he zoned out, drove through a crossroads and hit a van, nearly killing the driver – “I was like a big wrecking ball going through everyone in my life and smashing them to bits.”

That moment, he said, provided a wake-up call. Hazleton says that while the personal loss doesn’t go away — the effect on his son of the death of his brothers, “his two heroes” still hurts and he knows when he knocks on his mum’s door on Mother’s Day he can never give her what she wants to see – speaking about this period in his life with Proud2bSafe has “changed my life”.

He has refound his love of construction, and still works in groundworks. He says he has been confronted with colleagues messing around in dangerous trenches or using equipment in unsafe places, and now doesn’t think twice about reporting it.

“Some people look at it as being a grass. I look at it like being a lifesaver. If you don’t get the response you’re looking for, go higher until you do get a response.”

Speaking last year after winning the Biggest Impact award for his talks on behalf of Proud2bSafe, Hazleton said: “Proud2bSafe encouraged and motivated me to share me and my family’s experiences in order to encourage directors and senior managers to be more responsible for their actions, the people they employ, and also show the effect of how things can quickly escalate and affect not only their lives, families, friends and work colleagues but the same of the employee too.”

Because the abiding memory of that day in 2011, he says, is driving to the site, 45 miles away, telling himself: “This happens to someone else, it doesn’t happen to me. These are things you read about and see on the news. This is just a bad dream.”

He told the Safety & Health Expo audience: “I really hope that none of you have to make those phone calls, because if you do, your lives will never, ever be the same again.”

You can find all of SHP Online’s stories from a packed programme at Safety & Health Expo 2018 here.

Get your free copy now
‘It will never happen to me’: A harrowing insight into workplace death Matthew Hazelton told Safety & Health Expo about his personal journey following a workplace incident where two of his brothers and two other colleagues died.
Edward Perchard
SHP - Health and Safety News, Legislation, PPE, CPD and Resources