Safety and Health Practitioner (SHP) is first for independent health and safety news.
May 11, 2017

Chrysotile, or white asbestos, will not be added to the Rotterdam Convention’s list of hazardous substances. 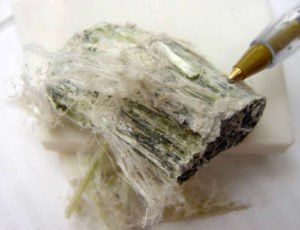 Agreement could not be reached in Geneva recently to list Chrysotile as a hazardous substance under the Rotterdam Convention. This was despite a recommendation from its own scientific committee. The decision requires unanimity and a handful of countries blocked the listing during the eighth meeting of the Conference of the Parties to the Rotterdam Convention (COP-8).

“This is a catastrophe. I didn’t expect this decision,” says Thomas Kraus, specialist in occupational medicine at Aachen University in Germany, who has advised the World Health Organization (WHO) on this topic. He continued:

“All types of asbestos are harmful to people and all types are carcinogenic. This is a ridiculous decision.”

The WHO states that exposure to chrysotile fibres causes cancer of the lung, larynx and ovary; the lung cancer mesothelioma; and asbestosis. Its position is clear: chryosotile should be banned worldwide.

Russia, Kazakhstan, Kyrgyzstan, Zimbabwe, India and Syria all blocked listing of chrysotile as a hazardous substance. Listing can be blocked by a single convention signatory. Asbestos campaigners say the decision discredits the entire Rotterdam Convention.

The Chemical Review Committee of Rotterdam first recommended listing of chrysotile asbestos in 2006. The committee is made up of 31 government-designated experts from around the world. Listing under annex III of the convention means prior informed consent is required from an importing country before it can receive it.

“It is absolutely disgusting that a small number of countries that pedal death and disease to the rest of the world can block over 190 countries wanting to – not ban a product – but label it for what it is: an extremely toxic and dangerous, cancer-causing agent,” says Arthur Frank, a public health scientist at Drexel University, US, who has given expert testimony in hundreds of asbestos lawsuits in the US. “This is the tyranny of the minority.”

Twelve African countries put forward a motion to have the rules for Rotterdam altered so that a three-quarters majority was enough. Discussions will now continue, though changes would have to be ratified by signatory countries. At past conventions, asbestos exporters stymied the listing. Russia and Kazakhstan are major exporters of asbestos, accounting for as much as 70% of global production.

A 2016 study estimated that 180,000 deaths occur each year from asbestos-related diseases1. Once exposed to asbestos, fibres can stay in the body and disease may not manifest for between 20 and 40 years.

“In Germany there are about 2,000 deaths per year caused by asbestos-related cancer and we banned asbestos in 1993,” says Kraus. “In Germany employers are obliged to register exposed persons. But in India, Pakistan and Russia, no such registers exist. I am convinced that this leads to severe under reporting [of deaths].”

The next meeting of Rotterdam Convention signatories will take place in 2019.

If it is classified as carcinogenic it should most definitely be banned. When the U.K. is independent eventually it is hoped that a decision could be made to at least ban it here. It is interesting that the only countries that opposed the ban are the ones where it is manufactured and have a vested interest financially.

Hi, does that mean that products from those countries can sell products containing Asbestos without any labelling

I agree with the experts on this issue but countries can legislate against the importation and use of such a substance. We have evidence that Chrysotile is carcinogenic so we can do it our way.

Except free trade agreements, unless made with this in mind, permit continued free import of substances like chrysotile asbestos in quantities just above those permitted in the jurisdiction of import. Such is the case with NAFTA and imports to Canada from the USA!

Words fail me, where do these top people come from; I forget they don’t work near these products

Will the uk if it comes out of Europe fall in with Russia and the minority and allow restrictions on this substance to be lifted if they do Europe should just close the doors and discontinue all talks and discussions including Brexit and deal with the other countiries left out of the original 190 countries who want to see this product banned.

Frank. I doubt that this is likely to happen in the UK. We banned crocidolite, amosite and other members of the amphibole class of asbestos in 1985 without any prompting from Europe. We held off banning of chrysotile pending an EC Directive on this but implemented the ban in November 1999 (with minimum exceptions) about 5 years ahead of the European deadline.

total madness and no consideration for the affects of this chemical

So democracy is irrelevant because we have illogical systems. What a mess. So are going to sit back and let 1000’s suffer due to greed and self interest. Would expect anything else from the objectors.

I have to agree Roland. If it is classified as carcinogenic it should most definitely be banned! An appalling decision. However, things will change…