Nick Warburton is former editor of SHP Magazine. He is currently working as a freelance journalist and as an account manager at Technical Publicity.
September 5, 2016 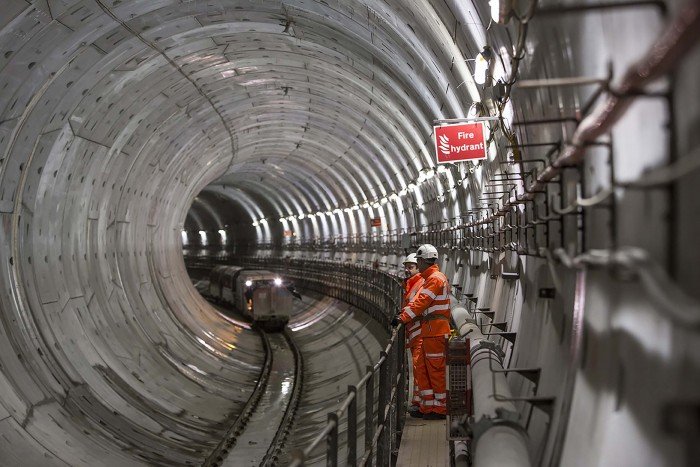 The water industry works in five-year cycles and historically has seen a spike in injuries in the first year of construction due to the sheer volume of work undertaken. But as Nick Warburton reports, a new Alliance Framework called ‘Eight20’ between Thames Water and its contractors has broken new ground, offering valuable lessons for other major projects.

To provide an adequate benchmark, the water company tracked a comparator of the historical over three-day notifiable frequency rate for key major UK projects – the ODA’s London 2012 development, Crossrail and Heathrow Terminal 5.

Crucially, the 16-month point has always been the spike and highest point of the injury frequency rate in many major capital programmes, but seeing no spike and sitting at 0.08 incident rate per 100,000 working hours is unprecedented. So what’s the secret to its success?

According to Karl Simons, head of health, safety, security and wellbeing at Thames Water, the sustained delivery over the past 16 months can be attributed to early engagement with its supply chain partners – Skanska, Costain, Balfour Beatty, Atkins, MWH and IBM – and a ground-breaking approach to construction.

“Early contractor involvement has been talked about for a long time but in addition to this equally as important is how we set up the contractual agreement in the correct way,” he insists.

“If you create the opportunity to drop the contractual barriers that exist between organisations, then you will have a much better outcome. The Thames Water approach led to the consultation and communication between construction, design and operational entities being undertaken in a very different way.”

This ‘Eight20 alliance framework’ approach earned Thames Water the accolade of ‘client of the year’ at the national Construction News Awards on 14 July.

The rationale behind the Alliance Framework can be traced back to 2013 when Thames Water decided to foster an innovative approach to major capital programme delivery.

The standard commercial model is client, designer and contractor but Thames Water’s thinking was to create a single team perspective. Regardless of what organisation an individual worked for, they would be part of the same team working towards a common goal. Each of its partners would submit their best people to work as part of this new Alliance Framework, from chief executive down.

Thames Water is required by the water industry’s regulator, OFWAT, to deliver a five-year programme and as Simons explains, the alliance agreement was set up in such a way that all partners committed fully to its delivery.

From the outset, the partners agreed that health and safety would be an underpinning key outcome in the successful delivery of the entire construction programme, which commenced in April 2015.

“It certainly wasn’t going to be business as usual,” continues Simons. “From the very beginning, even the way we went about the procurement process in terms of health and safety was different. Normally, you vet and select the competent organisations. We went beyond that to include the vetting of individuals put forward for key stakeholder positions.”

Starting in April 2013, two years before construction began, each of the contractors bidding for the programme put forward their representative senior team – these included the board director, chief operating officer, construction delivery director and health and safety director.

“What was different during the discussions was that I was flanked on the panel during the interview stages by several behavioural psychologists,” explains Simons. “They interviewed for behaviour and how the make-up of the team worked. We ended up with people who had the right frame of mind to work within the alliance.”

Next, the bidding contractors sent through a list of sites and the behavioural psychologists accompanied the Thames Water team out on a series of cultural penetration visits to observe how the contractors operated out in the field.

The final stage involved a two-day workshop where four-five representatives from each of the bidding contractors were joined by Thames Water’s chosen representatives. The teams were mixed together and set a gruelling set of challenges, and monitored throughout by the behavioural psychologists.

“Remember, we were still under competitive tender with everyone starting to work under their own steam as part of one single team. We hadn’t selected the final organisations yet. This was the individuals who were going to be selected if their organisation was successful,” explains Simons.

“Each of the series of steps enabled us to not only get the right organisations but also the right individuals who would work well as part of a team in key stakeholder positions.”

Once this had been completed, the group health and safety directors from the new partner companies were brought together to oversee the critical role of steering the alliance framework’s health and safety development. Sixteen months into construction, they continue to meet every quarter.

“The health and safety directors were instrumental in the creation of a single standard for every single contract working across the Alliance Framework, covering hundreds of major schemes. The ‘Eight20’ Capital Alliance is presently running at around £40M per month, so there’s a significant amount of high-risk work going on,” explains Simons.

“The single approach allows for a consistent delivery of the standards and expectations across our entire programme. When you have massive global organisations the size of Skanska, Costain, Balfour Beatty, etc. with their own management systems, creating one single approach takes the commitment and dedication of the most senior people in those businesses.”

As Simons adds this can only be achieved by bringing everyone around the table and building a relationship of trust and understanding, which is what led to all of the partners agreeing to choose the best from each company.

“This resulted in a set of collective standards that far out perform anything we had done individually before and they all signed up!” 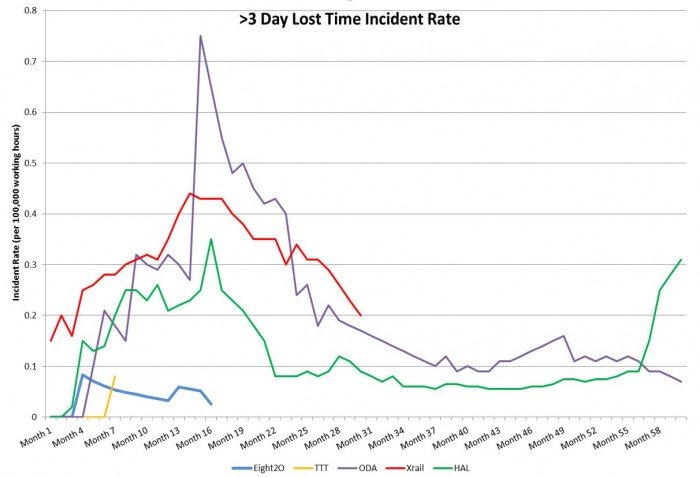 The results, as the graph demonstrates, speak volumes. As Simons concludes, the data shows the impact of the work that everyone has put in, setting the tone, bringing together a melting pot of cultures and forming a single team with a single vision, which ultimately has achieved the desired aim of eliminating injuries.

“That doesn’t happen by luck, coincidence or chance. This is an outcome based on setting up contracts correctly and putting up the Alliance Framework efficiencies correctly,” he says.

“Within the 16 months of delivery, our Eight20 Alliance inducted 6,000 people and achieved over 250 consecutive days as its longest period without a single person off work as a result of injury. That’s an absolutely remarkable performance outcome.”

Simons adds that Thames Water also implemented the same philosophy when developing the standards and expectations on its Thames Tideway Tunnel project.

“This is now following a similar injury rate path as construction has commenced. I firmly expect the 16-month point to also have no spike in injuries.”

James Dobson, Eight20 health and safety delivery manager says of the alliance: “Mobilising large-scale infrastructure projects can be a challenge; it was always key for us to learn from our shared experiences and ensure we gave Eight2O every possible success.

“The ECI phase was a perfect opportunity to take the best from all the partners and make it bespoke for the Thames Water environment. To achieve this, we formed a number of task-specific working groups and put forward our most experienced people to lead and support them. These forums were a great way to iron out our potential conflicts while building our critical relationships.”

“The success to date has been borne out of being inspired by each other,” says Dylan Roberts, director of health and safety, Skanska UK.

He adds that it was the combination of this inspiration and a “tireless drive to find the best approach and people to deliver the programme with the highest level of health, safety and wellbeing” that has attributed to the success of the alliance.

“Within the alliance we have always agreed to adopt the highest standards and to be held accountable for ensuring our policies are adhered to and our values lived,” said Roberts.

Peter Fisher, Costain Group SHE Director explained how the Alliance has seen the coming together of eight member companies “all fully committed to sharing the highest standards of health, safety and wellbeing from their own organsiations in order to develop an industry-leading culture and product.”

He says: “The fruits of these efforts have not only benefitted the Alliance as a whole but also the member companies who have adopted these enhanced standards themselves, thereby raising standards across the industry.”

Mike Evans, head of health and safety at Eight2O explains how the project was probably a ‘first’ on such a big scale: “From its very inception Eight2O decided to produce a single health and safety management system that all of the Alliance Partners would adopt.”

He adds that this has not only helped raise the bar for health and safety standards and processes but also “acts as a ‘unifying theme’ in building relationships across the alliance.”

He concludes: “However, systems are only the tools, their successful application is a function of leadership. So health and safety is firmly at the fore of the stated aims of Eight2O – be safe; create value; love our customers, and there is a strong focus on visible leadership of health and safety throughout the organisation.”

Listen to the webinar for free
Alliance re-frames major project to eliminate injuries The water industry works in five-year cycles and historically has seen a spike in injuries in the first year of
Nick Warburton
SHP - Health and Safety News, Legislation, PPE, CPD and Resources