Ian joined Informa (formerly UBM) in 2018 as the Editor of SHP. Ian studied journalism at university before spending seven years in online fantasy gaming. Prior to moving to Informa, Ian worked in business to business trade print media, in the automotive sector. He was Online Editor and then moved on to be the Editor of two publications aimed at independent automotive technicians and parts distributors.
September 30, 2019

The Fire Brigades Union has called on the government to take action to protect firefighters, after research uncovered that they are being exposed to dangerously high levels of harmful chemicals. 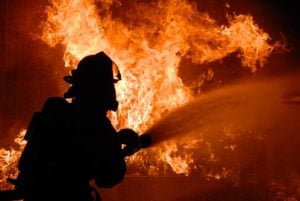 A study has found that firefighters are at risk of cancer due to repeatedly having to reuse and re-wear contaminated personal protective equipment and clothing.

The findings have been acknowledged by the UK’s Chief Fire Officer, who has recognised the high cancer rate, prompting the Fire Brigades Union to call on the government to take action.

The UK’s Chief Fire Officer, Chris Davies, is the lead for Health and Safety at the National Fire Chiefs Council (NFCC).

He said: “There is a lot of scientific and medical information out there, but all of it, that I’m aware of, states that you can’t prove or disprove a link to cancer.

“What I do acknowledge is firefighters are contracting certain types of cancer above the population norm, I accept that and that is a concern.

“It does sound frustratingly slow, I will acknowledge that, but the assurances that I want to give is there is an incredible amount of work going on in the background to make this happen as quickly as possible. But, I do acknowledge that that’s not quick enough for some people.”

Union spokesperson Chris Moore told the BBC’s Inside Out programme: “Up and down the country firefighters are dying of this, due to them saving lives in the line of duty, and their job is killing them.

“The government needs to wake up and realise, ‘OK there could well be a link here, in the interim term, while we work out what’s going on, this is what we’re going to put in place’.”

He called for better protective equipment and for it to be more readily available, to allow time for dirty and potentially contaminated kit to be properly washed before being used again.

Helmets are a particular concern and are said to be highly contaminated, especially when they are upturned and are stored with gloves inside them.

When fighting fires, gloves get exposed to smoke, soot and carcinogenic chemicals, but are often stored in helmets, potentially exposing the head next time the helmet is worn.

According to scientists, there are up to 16 major compounds in carcinogens where the toxic concentration may lead to cancer. These carcinogens are given off by all fires, from a barbeque in the back garden, to a huge warehouse fire.

Professor Anna Stec, Fire Chemistry and Toxicity Expert at the University of Central Lancashire, who carried out the research, believes there is a direct link between a firefighter’s career and occupational cancer.

She said: “Firefighters are twice as likely to die when compared to the general population, and they’re dying from not one type of cancer, but they’ve got multiple types.”

“If you take firefighters in their clothing, in a hot environment, they start sweating, they start dehydrating, body temperature increases, and dermal intake or absorption via the skin is automatically increasing.

“It’s kind of working like a sponge for all the fire toxins.

“So we’re looking at the type of clothing. We will heat it up, we will see if there are any contaminants within the deeper layers of the clothing, to see what effect and what danger and risk they will bring to firefighters.”

There are no profession-wide regulations for the cleaning of firefighter kit, it’s down to each individual brigade to enforce how the kit is cleaned, often by the firefighters themselves.

The research was aired in BBC1’s Inside Out programme on Monday 30 September and is now available on BBC iPlayer.

Download Barbour’s free director’s briefing
Protect firefighters from cancer, demands Union The Fire Brigades Union has called on the government to take action to protect firefighters, after research uncovered that they are being exposed to dangerously high levels of harmful chemicals.
Ian Hart
SHP - Health and Safety News, Legislation, PPE, CPD and Resources