In June 1990, SHP published Chris Steel’s article on Risk Estimation which introduced Hazard Rating Numbers, by quantifying Probability and Frequency of Exposure to a hazard, Number of People at risk and Maximum Probable Loss. Numerical values were allocated to descriptive phrases as in table 1. The intention is to select the phrase that matches the hazard and multiply the values together. The resulting Hazard Rating Number, when viewed on the scale gives an estimation of the risk. 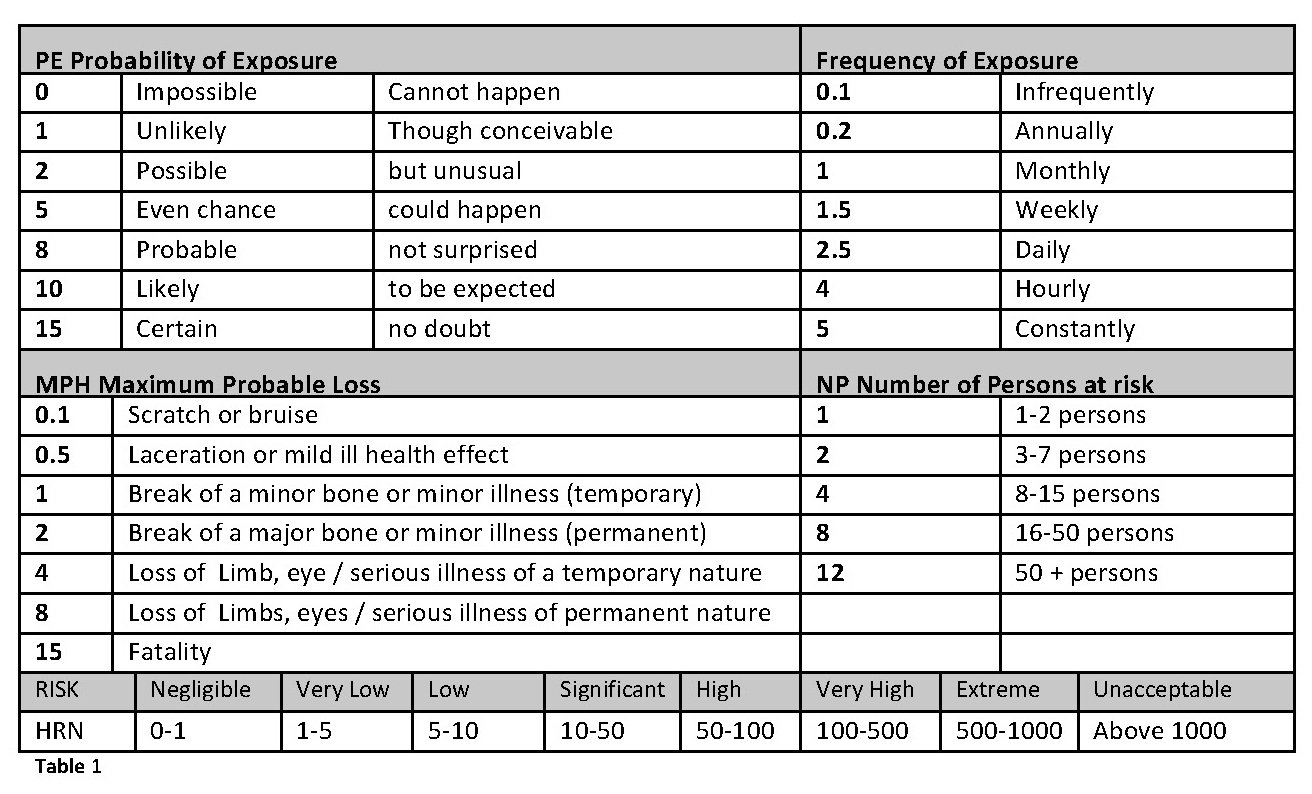 A second table shows how quickly the risk should be resolved. If the HRN was less than one, it was tolerable, if greater than one, control measures should be implemented in the timescales given. 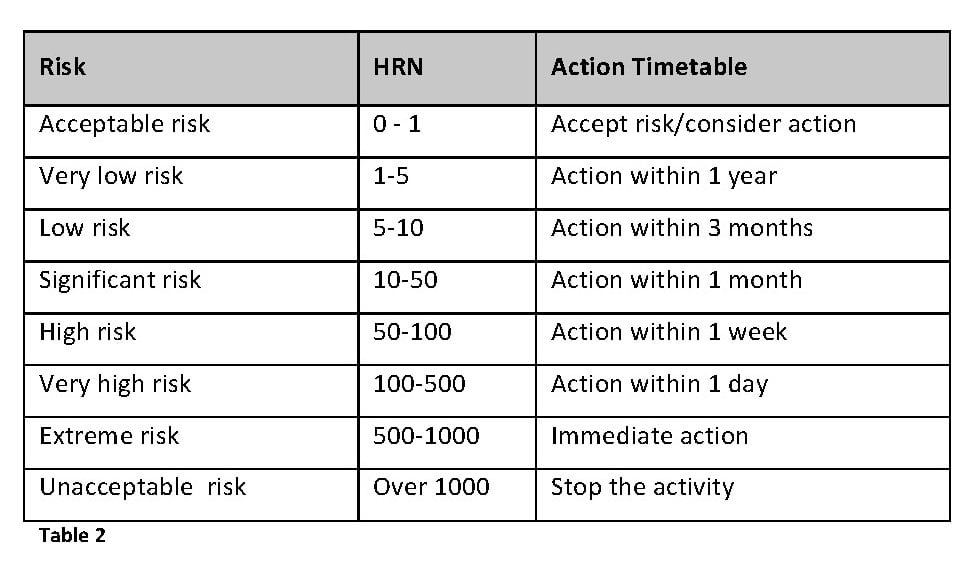 Chris explained that each organisation should select values and phrases according to its own needs.

A consulting organisation that was part of Longlands College in Middlesbrough adopted the method in their work assisting companies with CE marking of machinery, which was then new in 1993. I joined Longlands College in 1995 and we used the risk assessment method. The terminology was modified, changing ‘Probability of Exposure’ to ‘Likelihood of Occurrence’, and ‘Maximum Probable Loss’ to ‘Degree of Possible Harm’, the numbers were changed by removing the term ‘impossible’, as experience showed that nothing was impossible, if someone wants to override a safeguard, they will, often using ingenious methods. 0.1 almost impossible, possible in extreme circumstances, and 0.5 highly unlikely, though conceivable were added to the Likelihood of Occurrence table. The remaining numbers stayed the same. In the original article, Chris stated that ‘If however backup safeguards, fail-to-safety devices, etc. are used then PE may be reduced to almost zero’.

In 1998 four consultants left Longlands, to start Laidler Associates, which became one of the leading UK machinery safety consultancies, becoming the Machinery Division of TÜV SÜD Product Services in 2010. Laidler Associates developed software to assist companies with CE marking of machinery, and PUWER compliance, and the HRN method became widely used in industry.

On researching the system in 2015, I found the original article and still consider it relevant today. It meets the criteria in EN ISO 12100, the standard for Risk Assessment, which states ‘The risk associated with a particular hazardous situation depends on the following elements:

a) the severity of harm; (DPH)

b) the probability of occurrence of that harm, which is a function of; (LO) 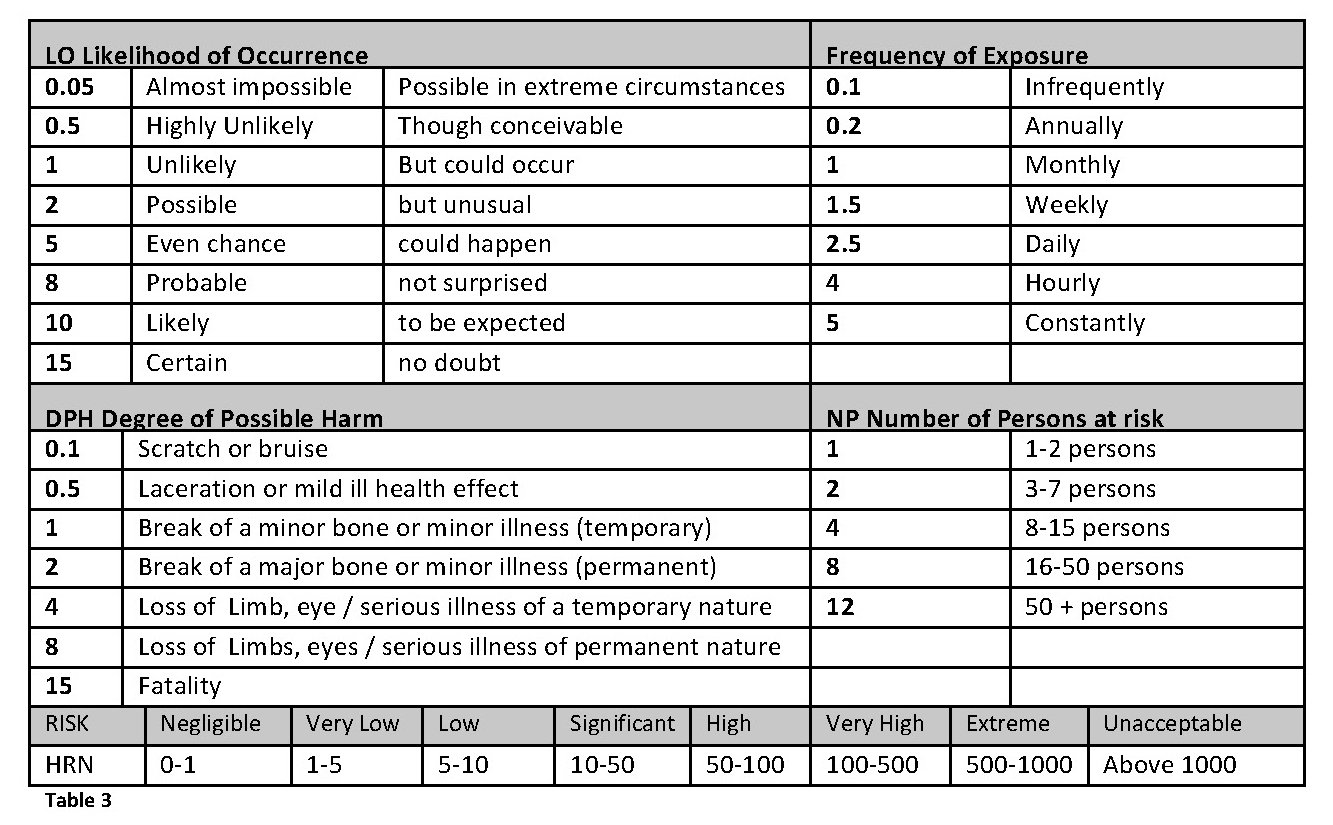 It is sometimes difficult to achieve sufficiently low figures for the control measure, and it is difficult sometimes to demonstrate a reduced frequency of exposure. I have changed the Likelihood to 0.05, which allows a lower HRN to be achieved, once a suitable control is in place.

Risk assessment is subjective and people have varied perceptions. When using the method, the user should understand the ideas behind the numbers. Even so, it is not unusual for different people to get completely different HRN’s for the same hazard, it just demonstrates that there is no right or wrong answer, and the most important thing is to identify the hazard and do something about it.

There is the potential for ‘risk assessing the hazard out’, by manipulating the numbers to show that a hazard isn’t as bad as first perceived, and is acceptable, even though no control measures have been implemented. This is not the purpose of risk assessment, the intention of EN ISO 12100 is to identify the hazard, and carry out risk reduction.

Derek Coulson is a technical advisor with Safe Machine Ltd and has been assisting companies with CE marking and PUWER assessments of machinery since 1995. www.safemachine.co.uk

Duty of care: 5 questions you might need to answer to keep you or your directors out of jail