Dr Tim Marsh PhD, MSc, CFIOSH, CPsychol, SFIIRSM is MD of Anker and Marsh. Visiting Professor at Plymouth University he is considered a world authority on the subject of behavioural safety, safety leadership and organisational culture. As well as many of the world's most recognisable industrial names Tim has worked with diverse organisations such as the European Space Agency, the BBC, Sky TV, the RNLI and the National Theatre in his 25 year plus consultancy career. He has key noted and chaired dozens of conferences around the world including the closing key note at the Campbell Institutes inaugural International Thoughts Leaders event in 2014. He has written several best-selling books including Affective Safety Management, Talking Safety, Total Safety Culture, the Definitive Guide to Behavioural Safety and Organised Wellbeing. Previously he led Manchester Universities ground-breaking research team into behavioural safety methodologies in the 1990s.
August 5, 2022

In his latest blog, Tim Marsh discusses our collective approach to risk…

Delivering a session to the board of an award-winning construction company recently, I was challenged with this question. My first thought was ‘don’t let them lead major political parties’ but I did actually give a considered answer and I’d like to summarise that here. 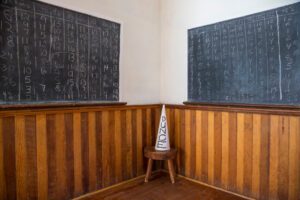 ABC (or consequence) analysis shows how we’re all capable of giving in to short term temptation and coming up with a short cut or work-around if the safe or healthy way is slow, inconvenient or uncomfortable. Some more than others, of course, but generally though usually getting away with it we all roll the dice from time to time. But we don’t always get away with it, however, and so often, we look at others, use a bit of post event hindsight and think ‘when you think about it’ the risk was obvious and the consequence close to inevitable. In doing so, we can totally ignore the fact that we ourselves take similar risks but have been luckier – or perhaps, more accurately stated, less unlucky.

When I read out a list of behaviours to do with sub optimal lifestyle habits at conferences that lead to tens of millions of deaths worldwide annually (diabetes, cancer, heart disease, HIV, Cirrhosis, car accidents…) all audiences will admit to a decent score, on average, and will laugh out loud (some with guilty pleasure and some with clear pride) when I ask if anyone was tempted to shout ‘house!’.

That ‘pride’ leads us to point two…

(Because) Point two – Being a dimwit (sometimes) is species adaptive.

If you’re reading this, you are a member of the most successful species in the entire universe and one of the reason’s we’ve done so well is that we have a built-in degree of risk tolerance. (Einstein: ‘a ship is safest in the harbour but that’s not why we built it!’). More than that, we have a built-in risk appetite that we’re born with. For example, multi-million selling writers like Dan Peterson have pointed out that if small children are provided with a playground that’s too safe, they’ll adapt it by climbing over it rather than through it.

It’s often fun and exciting to take risks of course but also reassuring on an existential level as we demonstrate mastery of some of the many risks we face in life. Again, some have more risk appetite than others but generally, as a species, we are, as the local youth here in Manchester would have it… bang up for avin’ it large.

In other papers on this site, I’ve discussed the fact that even someone having a really good day will spend at least an average of five minutes an hour distracted, away with the fairies and therefore vulnerable to error. (That’s someone who has slept well, has no relationship, health or money worries. Who isn’t struggling with their mental health and who isn’t suffering chronic pain or on medication. Who enjoys their job, has the tools and time to do it well and who gets on with their boss and colleagues). However, if we’re suffering from any of the items on the list then being distracted for only five to 10 minutes a day can feel impossible. (See the article ‘Why James Reason was facing in the wrong direction’)

And we’ve not even touched on long-COVID – just officially classed as a disability – and its impact on mental health, brain fog and fatigue…

What to do about these eternal truths?

At the most basic behavioural safety level rather than exhort staff to pay full attention at all times and stay alert to such as trip hazards it’s better to say, ‘in the 55 (30!?) minutes when you’re switched on and alert, please clear up any trip hazards you spot so they’re not there to trip over 20 minutes from now when you turn a corner distracted…’.

More generally, we need to accept that (especially) in a fast paced, changing and dynamic world error is ‘baked in’. We need to pro-actively identify where it’s most likely to occur and work our ‘Bow Ties’ up the safety hierarchy to identify design solutions pro-actively not just reactively. (The world of Formula One a great example and the subject of a recent article). At a cultural level we need to involve the real experts (the front line) as much as possible in this analysis and solution generation – an approach that also generates improvements in empowerment and engagement. We should also train all management in emotional intelligence skills like assertion and active listening and the importance of praise and how to give negative feedback constructively.

In addition to general life skills, more specific training in ABC analysis, human error, mental health and fatigue management is always shown to repay investment many times over. In short, we need to create an environment and culture where our natural propensity to dimwittery is less likely to occur and less likely to cause loss when it (inevitably) does.

Get this cultural aspect right and key metrics like turnover, absenteeism, presenteeism, trust and discretionary effort all head sharply in the right direction. It’s always been easy to assert that in good years this helps boost profit and in bad years it helps long term sustainability… however, in 2022 it can make all the difference between short term survival or business failure.

More and more C-Suits, driven by this urgent business imperative, are now genuinely keen to address culture in this way with many commentators pointing out that it’s a once in a lifetime opportunity for us in the wellbeing, health and safety world.

In these days of staff shortages – especially skilled staff – the last point worth making about Dimwits is that getting the issues outlined above right means that organisations are less likely to have to knowingly employ one!

Click here to listen to the full Louis Theroux interview.
‘But… What do we do about the dimwits?’ In his latest blog, Tim Marsh discusses our collective approach to risk…
Tim Marsh
SHP - Health and Safety News, Legislation, PPE, CPD and Resources

Absolutely. The question is not ‘what do we do with dimwits’, but how can we mitigate the risks of dimwit like behaviour. Occasional apparently idioitic acts do not make us idiots, nor do they justify a death sentence.

When investigating accidents, the question is not ‘why did they make such a silly mistake’ but why would any sane person be prone to the same mistake.

Couldn’t agree more Tom (and should point out that I’ve never used the word ‘dimwit’ in my life – and nor, of course, did the c-suite executive in the session … I’d have kept the right side of family friendly with ****wit myself! :))

Love the Einstein quote and it’s use here. It’s funny. I’ve just been having exactly this conversation with a contractor who is struggling to get some of his guys to fly in formation. Whilst I tend to roll my eyes when anyone mentions Covid these days (the universal excuse for anything for most people/companies), there certainly does seem to be a brain-fog related trend with a lot of people on the Client/CDM/H&S/Contractor sides of things who regularly tell me their ability to focus after 2 years of lockdown/home working has reduced drastically, that they hate the idea of interacting with… Read more »

Interesting article and puts the point across well. But it was John A. Shedd who said “A ship in harbor is safe, but that is not what ships are built for”.